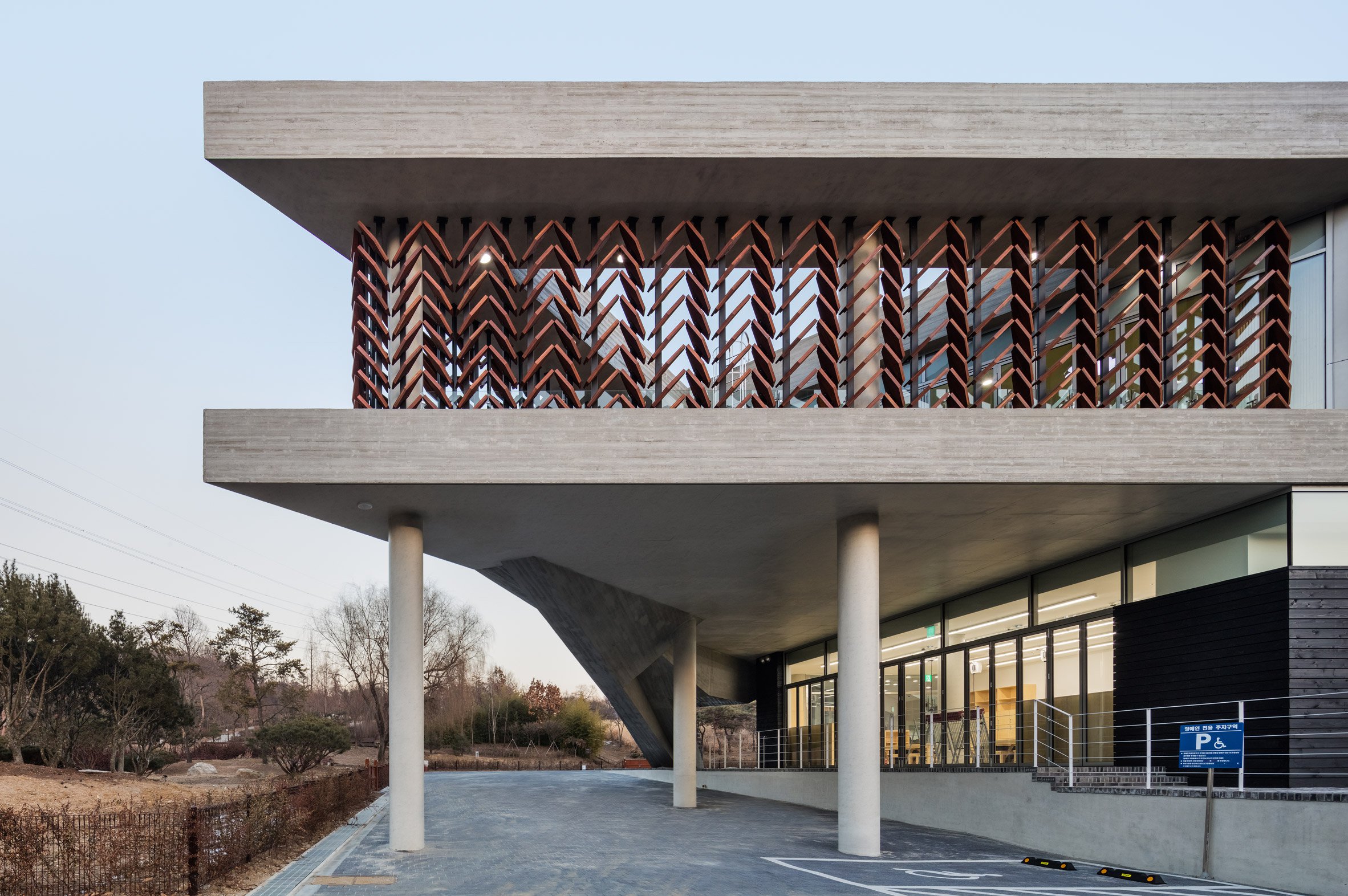 This museum in Incheon, South Korea, is dedicated to teaching visitors about wood and features moving timber screens that create effects similar to dappled sunlight filtering through trees.

Soft Architecture Lab’s proposal won a competition organised by the city and the forestry service for a building that provides facilities for the large number of visitors who come to explore the arboretum’s diverse plants and trees.

In its response to the competition brief, the studio sought to move away from the more typical timber museum buildings used to house exhibitions about wood at the organisation’s other sites.

Instead, the Mokyeonri building incorporates wood into its architecture in ways that provide visitors with a multi-sensory experience of the material and where it comes from.

“The project name, Mokyeonri, means a harmony between trees from different roots,” said the architects, “which identifies an architecture of a series of spatial experiences sensing the diverse attributes of wood.”

The building features a striking, angular form, with a pointed corner facing the adjacent car park extending over an entrance incorporated into a glazed surface on the ground floor.

Cylindrical pillars support a pair of concrete slabs that form the floor and roof of the upper level. The interactive wooden screen occupies a void between these two surfaces at the corner of the building.

The screen is formed of six-sided “leaves” made from a hardwood called merbau and attached at a single point to metal frames.

The wooden panels are arranged in pairs fixed together at one end by springs. When the wind blows, they close up slightly before gently regaining their original position.

The effect of the subtle movement combined with the shadows cast when the sun shines is evocative of the dappled light in a forest.

On the opposite side of the upper floor, a similar screen is positioned around the edge of a deck that can be seen from inside the building’s main circulation area.

This screen incorporates a pulley system driven by a motor so the distances between the vertical elements can be manually adjusted.

Drawing the leaves together creates broad gaps that increase light levels and views inside, while opening them out again produces a more even, permeable surface.

This same technique is applied to a screen that forms a gate set into an angular concrete frame protruding from the eastern end of the ground floor.

Drawing the moveable elements of the gate together using the motorised pulleys provides gaps through which visitors can pass to reach a paved courtyard.

The museum is described by the architects as “the first public project of kinetic architecture in South Korea”, and aims to enhance the visitor’s perception of the sun and wind through the actions of the moving surfaces.

A double-height void containing a staircase connecting the two floors is topped with a ceiling featuring Japanese cypress battens that extend downwards in regular rows.

The wooden sticks partially conceal utilities integrated into the ceiling and form another surface that appears to alter in appearance as the viewer moves around within the space.

Alongside a lobby and reception desk, the building’s ground floor contains facilities for teaching and conducting woodwork, including a workshop with an adjoining preparation room, an instructor’s waiting room, storage and a dust-collection space.

The stairs ascend to an upper floor housing a children’s wood museum, playground, seminar room, toilets and outdoor spaces at either end, one of which is designated as a playground and the other as an observation deck.

Photography is by Shin Kyungsub.