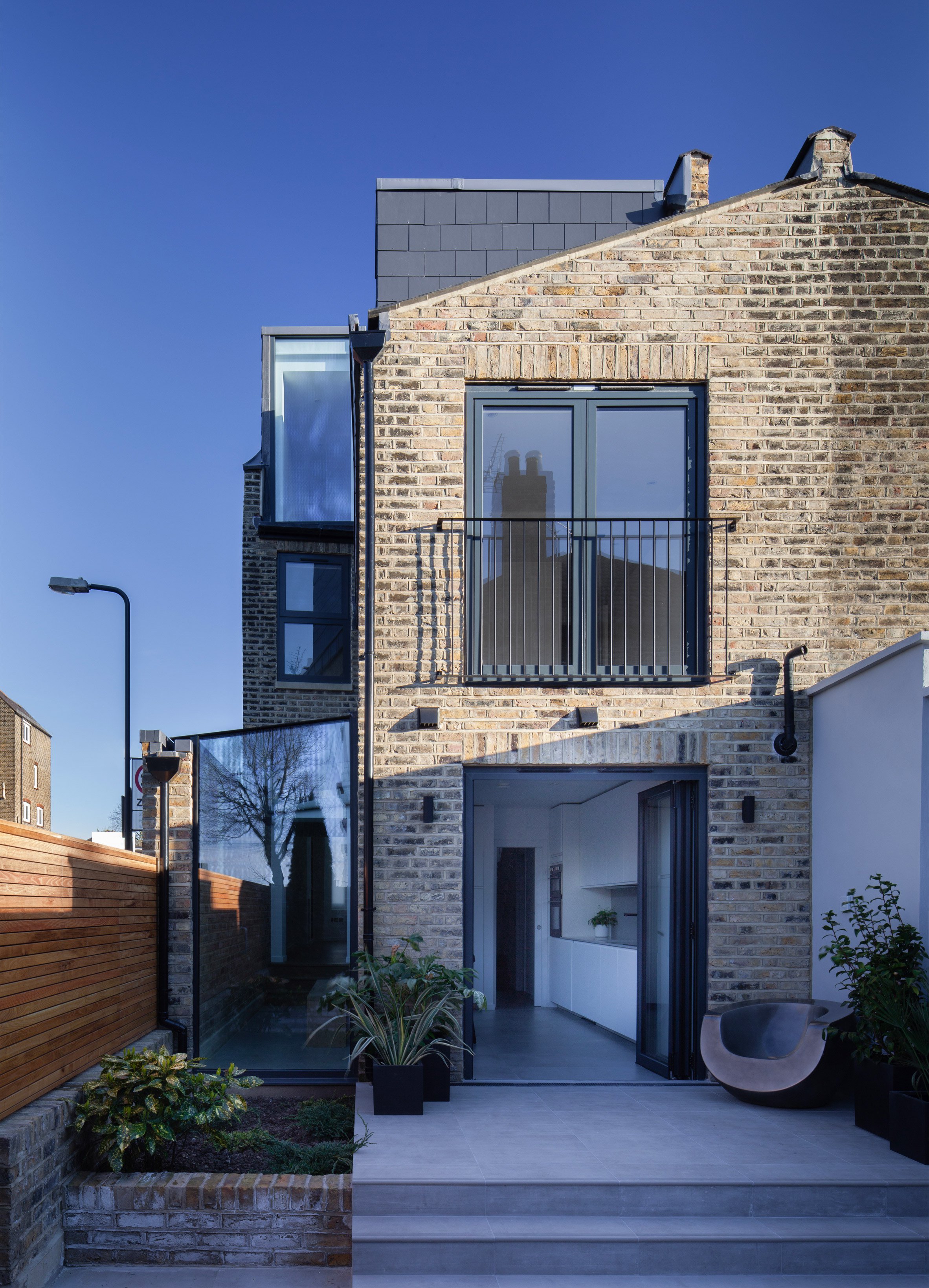 Mulroy Architects has added a glass passageway to the side of this three-storey house in north London, which features an interior fitted with bespoke oak joinery and furnishings by local studio Manea Kella.

London-based Mulroy Architects maintained the period character of the facade of the end-of-terrace Edwardian home, while modernising the interior with minimalist furnishings by interior design studio Manea Kella.

The architecture studio opened up the ground floor of the extension, adding a glass roof over the combined kitchen and dining area to allow natural light to flood the space.

One of the side walls of the house was removed and replaced with a stock brick cavity wall and joined to the rest of the house by a sliver of glazing.

Directly outside this glass passageway, a raised flowerbed adds greenery to the kitchen space.

Grey tiles underlaid with underfloor heating continue this theme, merging the kitchen space with the similar tones of the outdoor concrete patio, which steps down into the similarly grey-tiled terrace.

For the furnishings, Manea Kella referenced the original Edwardian oak staircase that leads up to the first floor, continuing the use of the wood throughout the house.

In the kitchen, the studio included a solid-oak dining table and bench that sit under the skylight, while a smaller version of the table is used as a coffee table in the ground-floor living room.

Three bedrooms are situated on the first floor, each with sizeable windows. French windows added to the rear-facing bedroom open onto a small Juliette balcony overlooking the garden, while in the master bedroom bay windows face toward the street at the front of the house.

A full-height window situated at the corner of a second-floor bedroom overlooks the street below. The master bathroom is located at the loft level, which includes a stand-alone bathtub placed underneath another angled skylight, allowing bathers to look up to the sky.

The local interior design and planning studio led by Adrian Manea and Elena Neophyto recently completed a one-bedroom flat in a northwest London housing block, which it also updated with modern fittings and furniture.

Mulroy Architects includes a year-round training facility for Radley College’s rowing teams. The firm built a pool with a stationary boat on top for the private boarding school in Oxford.

Photography is by Tom de Gay.