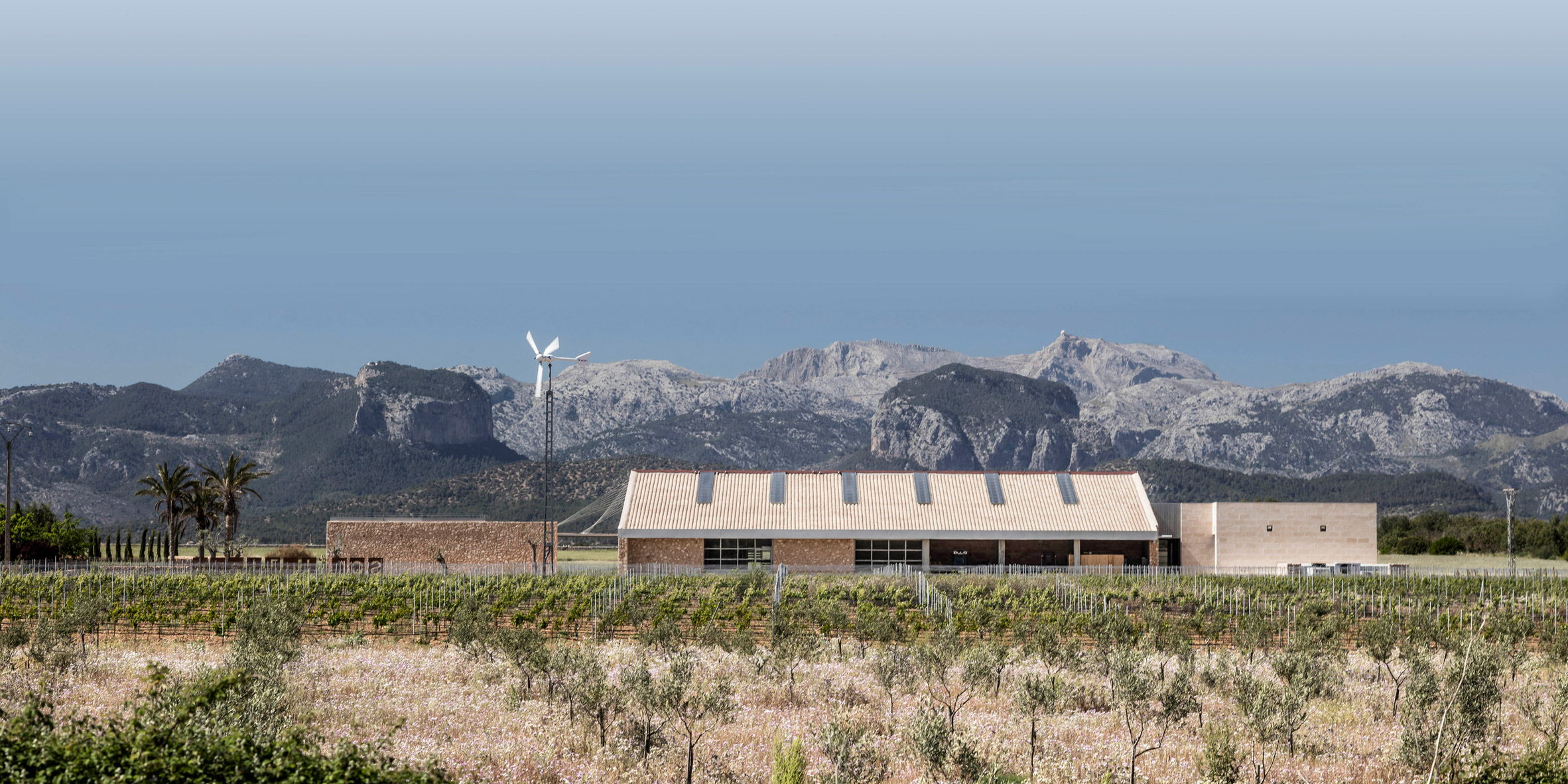 Cork-insulated roofs help create a stable temperature for wine production inside this solar-powered winery in Majorca by Munarq Arquitectes, which also features a sandstone exterior and wicker sunshades.

Pau Munar and Rafel Munar of Mallorca-based Munarq Arquitectes were asked to design the 1,300-square-metre space for the Son Juliana wine company, which needed a facility that could produce 40,000 litres of wine each year.

The flat, clay terrain of the site extends towards the dramatic Tramuntana mountains, which form the spine of the Balearic island.

The linear building runs parallel to the mountain range, and its concrete structure is covered in pieces of sandy-toned marés stone.

“They were in a hurry, so because of this we built in prefab concrete structure, built in 15 days,” the architects told Dezeen.

“We used a prefab concrete structure, and local and natural materials like marés – a local sandy stone – in the exterior facades, and ceramic bricks for the interior finishing walls,” they continued.

“What is unusual is that it is 100 per cent renewable energy powered and not connected to the net.”

The linear arrangement of the facility also responds to the production requirements, with grapes entering at the eastern end of the building beneath the sun awning before being moved into a pressing room, an underground fermentation space and then a barrel room for maturing.

At the western end of the building, the wines are bottled and labelled before being stored in a cool space adjacent to the sales room at the public entrance. Here, there is also a tasting space.

The winery is designed to operate entirely on renewable energy, with the concrete and stone walls and the cork-lined roof insulating the building.

“The winery is located in the basement, because it requires a special temperature and humidity conditions. The retaining walls are stone gabions to take advantage of the thermal mass and soil moisture that remained during the summer,” explained the architects.

“The contribution of ventilation and temperature is carried through pipes connected to geothermal heat pumps.”

Similarly, Spanish architects Jorge Vidal and Victor Rahola partially submerged a Catalonian vineyard building to benefit from the same conditions, but also to provide an underground passageway to the owner’s house.