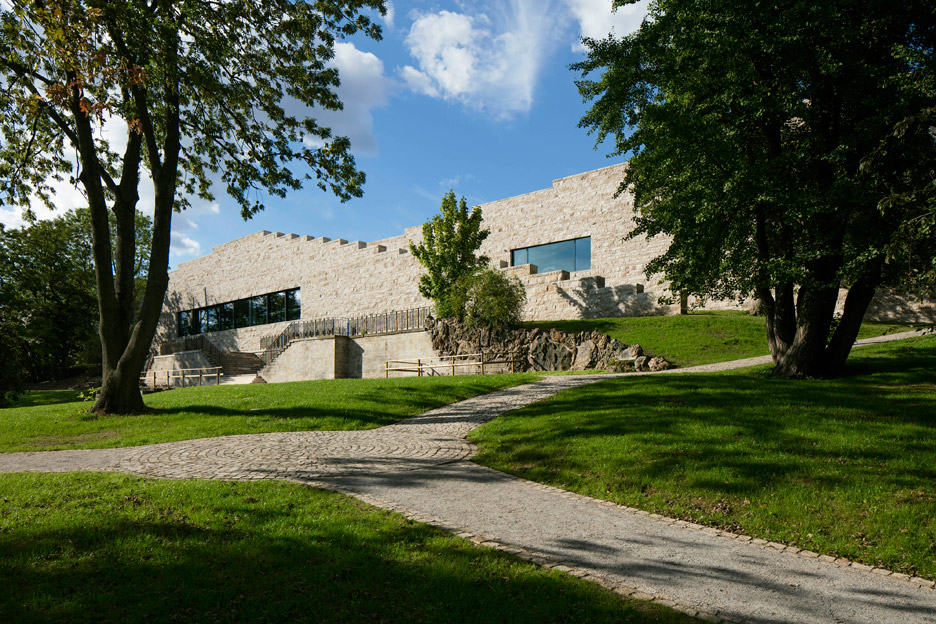 This limestone-faced museum in the German city of Kassel by Kada Wittfeld Architektur houses the archives of famous literary duo the Brothers Grimm (+ slideshow).

Grimmwelt Kassel (The Brothers Grimm Museum) is built on a sloping plot in Weinberg, a former vineyard near Kassel’s centre. The elevated site is strewn with fragments of stone retaining walls, steps, pergolas and is supported by planted terraces.

The German studio, which also designed a weathering steel museum that cantilevers over a Celtic burial ground, gave the Grimmwelt Kassel a step-shaped roof that doubles as a view point over the city.

The city was once the home to Jacob and Wilhelm Grimm – the Brothers Grimm – and the museum is designed to present their literary works. The brothers are best known for their anthology, the Grimms’ Fairy Tales. The book of folklore stories includes Cinderella, Sleeping Beauty and Snow White.

“Visitors experience a place with diverse atmosphere and one that focuses on German linguistics as well as the collection of the Grimms’ Fairy Tales,” said the studio.

The museum is divided across five split levels that accommodate the sloping site, and features a stepped roof culminating in a viewing platform over the park and city.

“The new museum continues the topography of the surroundings in an accessible roof landscape and thus provides the park with an open stairway that leads up to a terrace with a view across Kassel,” said the architects.

“It translates the historical and topographical features of the surrounding park into a continuous open space and invites visitors to explore the exhibitions at their own pace.”

A cafe, shop and exhibition hall showing introductory exhibits spread across the largest of the museum’s floors at ground level.

The long ground level features panoramic windows, snaking benches with views over the southern part of the city and the nearby Karlsaue Park.

A special exhibitions space is situated at the top of the building and three partial basement floors contain archives and storage areas.

The reinforced concrete structure is faced in coarsely textured limestone block, which are laid in courses of varying height. The material was selected for its reference to the limestone passages below and the previous structure on the plot, which was destroyed during an air raid in 1945.

A warren of limestone tunnels beneath the former vineyard were used for beer storage in the 19th century, then converted into shelters during the second world war.

Kassel is also home to Documenta, a contemporary art festival that has been held every five years since its foundation during the 1955 Federal Horticultural Show, for which the late 2015 Pritzker laureate Frei Otto created a tent-like pavilion. The next instalment, Documenta 14, will be held in summer 2017.

Photography is by Jan Bitter, unless otherwise stated.

The post Museum dedicated to the fairytales of the Brothers Grimm has a stepped roof overlooking Kassel appeared first on Dezeen.