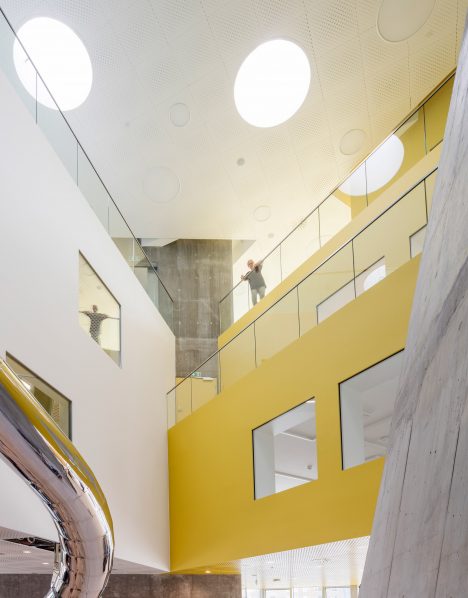 Mazes, slides, nets, fireman’s poles and climbing walls all feature inside this Copenhagen community centre, designed by architecture studios MVRDV and Adept to encourage adults to be more active (+ slideshow).

Opening today, the Ku.Be House of Culture and Movement offers a wide assortment of physical activities, including sport, mediation, dance and parkour – a practice that encompasses running, climbing and jumping.

These pursuits take place in volumes with all kinds of unusual shapes, ranging from a huge cross to a doughnut.

The brief given to Rotterdam-based MVRDV and Copenhagen studio Adept was to create a facility that would bring the residents of Frederiksberg together and improve their quality of life.

They interpreted this to create a 3,2000-square-metre building that functions like a giant play park. Visitors are invited to find their own routes through the interior, using both their hands and their feet.

“In Ku.Be we tried to turn your average experience of a building on its head,” said Adept co-founder Martin Krogh.

“What would otherwise be a simple, mindless journey through the building turns into an exploration and discovery of movement. Here it’s you that defines the route, however you want: climbing, sliding, crawling, jumping.”

The interior is divided up into six segments, each a different shape and colour. These house the various activities, which also include traditional spaces such as classrooms and meeting areas.

There are also spaces left in between, which are more flexible in use. One called the Labyrinth comprises a three-dimensional grid of cubes, while the Mousetrap is a vertical maze.

“Larger volumes are suited to hold performances or public meetings, smaller ones can be for exhibitions or debates. The fast-pace rooms are perfect for dance or parkour, and zen rooms give you the contrast of yoga or meditation,” he continued.

“It’s between these volumes where the real fun will happen though, spaces where we hint at a use, but which will become entirely user-defined.”

Externally the building is much more simple and rectilinear, although fragmented tile surfaces and angular windows hint at the shapes of the volumes within.

Gardens surround the structure, integrating changing lights and sounds. A hill with integrated slides and an amphitheatre also feature.

MVRDV and Adept previously teamed up on the design of the Rødovre Skyscraper, proposed for Copenhagen in 2008.

They first revealed their design for Ku.Be two years later. It is MVRDV’s third project in Denmark, following the Frosilo apartment blocks in converted seed silos and the Roskilde rock music museum.

The post MVRDV and Adept team up on community centre that invites grownups to play appeared first on Dezeen.