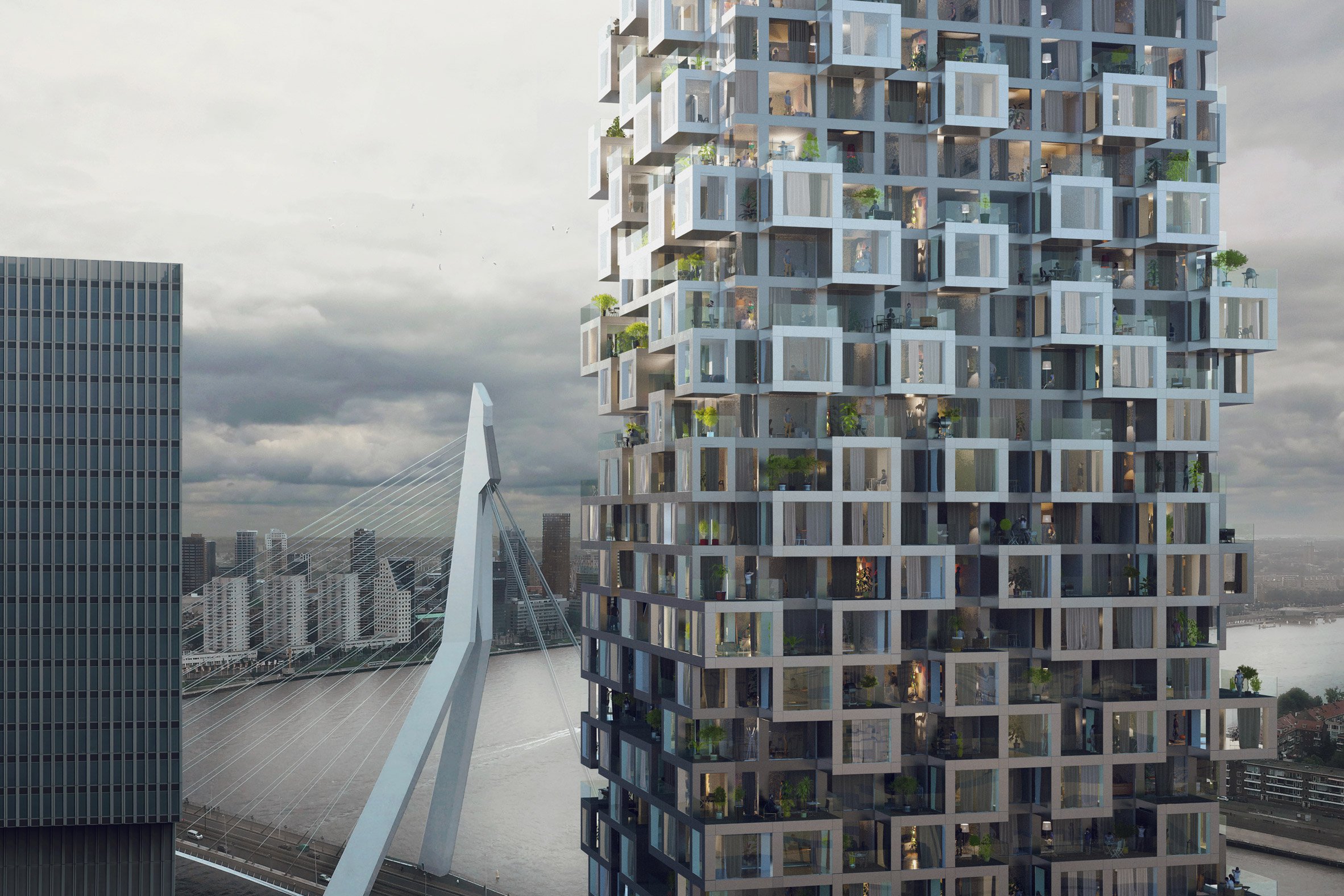 Rotterdam studio MVRDV has unveiled plans to build a new skyscraper in its home city, featuring a pixellated facade made up of hundreds of bay windows.

Rising to a height of around 150 metres, The Sax will consist of two towers, bridged halfway up by a large horizontal volume with a public plaza on its roof.

Large square windows will cover all the building’s exterior walls, including many that project forwards. Most of these relate directly to the layout of apartments inside the building, giving residents floor-to-ceiling windows with 270-degree views.

“Rotterdam is more and more a city of towers and The Sax will add a new element to this collection,” said Jacob van Rijs, one of the three co-founders of MVRDV.

“The facade features a contemporary reinterpretation of the bay window, providing views for each unit with the advantage of allowing individual and unique apartments in this large collective complex,” he continued. “This windowed effect adds an extra dimension in experiencing the view onto Rotterdam.”

The unusual form was designed with the ambition of creating “one recognisable silhouette” for the riverside building.

This is an approach the studio has also taken for other skyscraper designs, including the twisted Turm Mit Taille tower for Vienna and “vertical city” Peruri 88 for Jakarta.

At the building’s base, a glazed plinth will accommodate shops, restaurants, bars and cafes. The towers will contain 450 apartments, while the horizontal block will be occupied by a 150-room hotel.

The large public terrace will stretch across the entire roof of the hotel block, 80 metres above the ground.

“The plinth and the bridge, which contains a hotel, will be open to the public, making Wilheminapier even more lively,” added Van Rijs.

MVRDV ranked at number nine on the inaugural Dezeen Hot List – a countdown of the biggest names and emerging players in architecture and design.

The studio, which is also led by Winy Maas and Nathalie de Vries, is working with engineering firm Arup on The Sax. Construction is due to start in 2018, and the building is due to complete in 2022.

The firm recently completed two major projects: a High Line-esque elevated park in Seoul, and a tower block that resembles a giant staircase in Poznan.

Rotterdam is “the city of the future” say architects

Images are by WAX Architectural Visualisations.