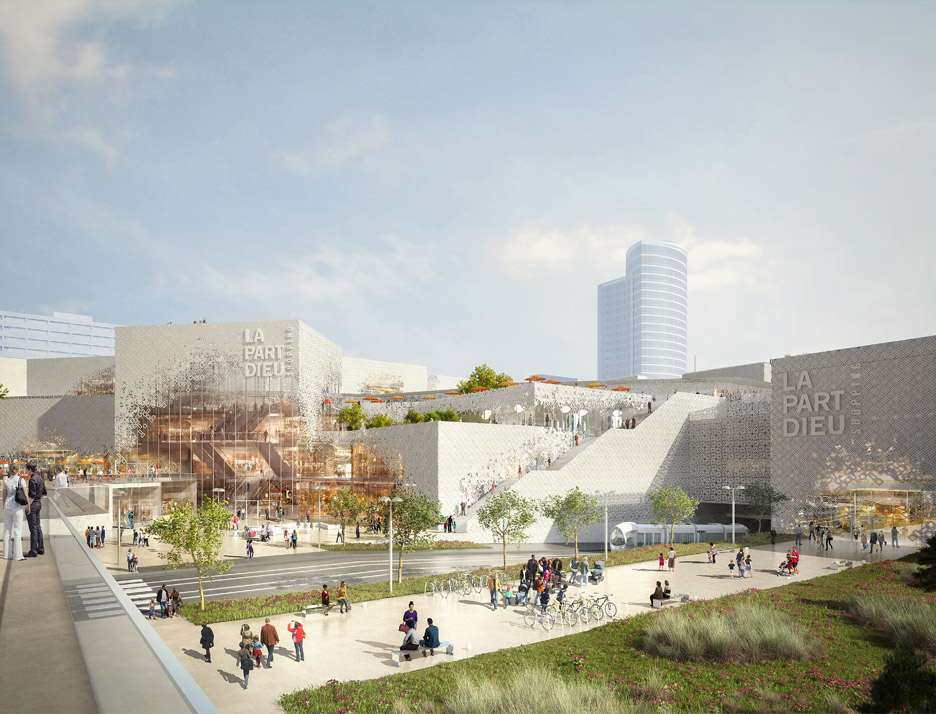 Rotterdam firm MVRDV has unveiled its plans to overhaul La Part Diu retail complex in Lyon, which feature an “evaporating” facade and a rooftop park.

MVRDV‘s transformation of the shopping centre is considered the centre piece in a major renovation taking place across the third arrondissement of the French city.

The firm’s proposal includes a mixture of commercial, leisure and public space in the form of terraces and gardens – each of which will merge into the existing retail complex.

Through rearranging the programme and replacing the old car park, the firm will vastly increase the usable space of the building.

While the lower levels of the complex will house retail spaces, the upper levels are planned to accommodate restaurants, parks and a cinema and parking.

The street will be extended through the building via a walkway, and over it by stairways and escalators that take users up and over the complex.

A restructured main entrance to the east of the complex will provide access to visitors arriving from the Part-Dieu train station.

“By rearranging the programme, we create an urban platform that is somewhere between tranquil park and vibrant market square, recreating an atmosphere inspired by the Lyon river side,” said MVRDV co-founder Winy Maas. “The restaurants, bars and cinema all spill out onto the terraces but can be accessed independently to the retail facilities through covered escalators that navigate around and over the building.”

“The terraces turn the vast roofs of the shopping centre into open, green space in which the public can meet and relax; a quality that is currently missing in this area,” he continued.

In hopes of preserving and improving La Part Dieu shopping centre’s original identity, the architects are to re-use and update the existing facade.

Beige-coloured concrete panels will be replaced by a pattern of interwoven rectangles that disappear as they reach the building entrance.

“This evaporation of the facade, coupled with the redefinition of the spaces within and outside the building, looks to reconnect La Part Dieu centre with not only its immediate surroundings, but also to the wider area of Lyon,” said Maas.

“The pattern of interwoven rectangles will continue over the new envelope eventually evaporating as they reach the building entrance; a physical and symbolic gesture to the new opening up of the shopping centre,” he added.

MVRDV won the 2013 competition to overhaul the building, which was first constructed in 1975. The complex was previously extended by the adjacent 28-storey Tour Oxygène in 2010.

The Rotterdam studio recently revealed its design for a shopping centre in central Beijing, which is covered by a pearlescent facade.

MVRDV is also working on an elevated park that could become South Korea’s answer to the High Line, an overhaul of a 1970s complex in Paris and a bowl-shaped art depot for the Museum Boijmans Van Beuningen in Rotterdam.