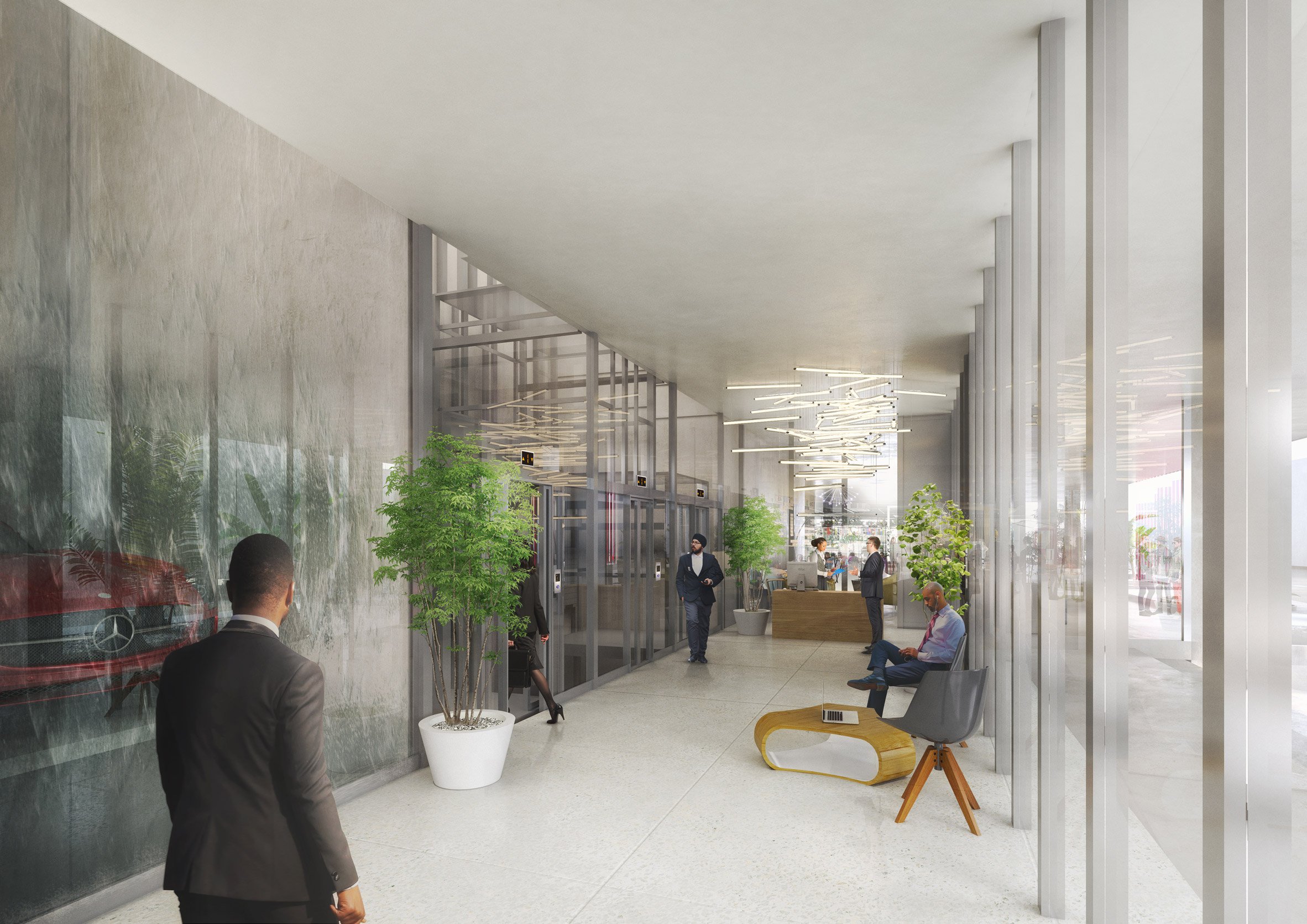 Work has begun on an office building designed by Rotterdam studio MVRDV for the Sri Lankan capital Colombo, which will feature a gridded facade based on local weaving patterns.

Rising eight storeys high, the 12,000-square-metre Veranda Offices building will include a mix of office spaces, as well as a restaurant, a cafe and an events pavilion.

Stepped terraces will interlock with glazing to create a pattern on the exterior that MVRDV intends to mimic the patterns of fabric produced by weavers in the Sri Lankan capital.

The facade design is also intended to bring plenty of daylight inside, as well as mark a division between internal office spaces, allowing for flexible internal plans so that floors can either be rented in their entirety or as smaller units.

Shutters will fold down to offer the terraces protection from the area’s harsh rain and strong sunlight, while windows will be slightly indented to provide shade.

The ground floor will host a public the cafe and a restaurant with a slightly set back facade surrounded by landscaping intended to provide a link to the nearby Park Street Mews – a strip of finance, business and gallery spaces.

A drop-off point and lift lobby will also provide access to the rooftop, which will feature a sculpture garden and events pavilion.

Veranda Offices will be MVRDV’s first project on the island of Sri Lanka. The firm sees the design as a model for the future development of the Colombo, as the country’s capital undergoes urbanisation.

“Veranda Offices reflects Colombo’s contrasting nature as a city of old and new that is also both busy and vibrant,” said MVRDV co-founder Nathalie de Vries.

“Our design approach is ecological, culturally sensitive to the location and its future users by offering them attractive, light-filled offices with a lively commercial plinth.”

MVRDV developed the scheme with local architects ACS Integrated and PWA Architect for the client Moot Manor. Its completion is slated for February 2019.

Other grand projects planned for the city include a residential skyscraper by Moshe Safdie, while SOM was recently announced as winners of a competition to design a masterplan for the port area of the city, including skyscrapers, a marina, canals and a park.

According to MVRDV – which ranked at number nine on the inaugural Dezeen Hot List – it will also be the first centrally cooled building in Sri Lanka with naturally ventilated outdoor spaces.

MVRDV, which is led by Winy Maas and Jacob van Rijs, has recently completed two major projects: a High Line-esque elevated park in Seoul, and a tower block that resembles a giant staircase in Poznan.