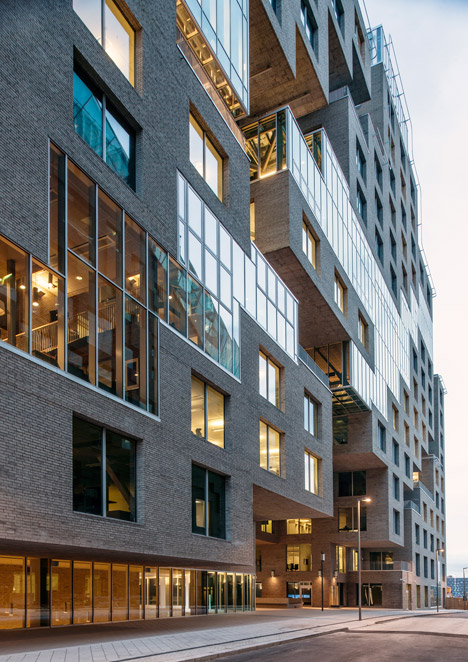 Winy Maas of MVRDV explains how his design for a “big building composed of mini units” created a headquarters for Norway’s DNB Bank interspersed with indoor and outdoor meeting places, in the penultimate movie from our exclusive series (+ movie).

Completed in 2012, the building is one of three designed for the bank on a developing stretch of Oslo’s waterfront. Rotterdam-based MVRDV planned the 17-storey building as a stack of brick and glass cubes – giving it a pixellated appearance.

The aim was to make it look more like a cluster of domestic-scale properties than a high-rise block – a tactic also recently employed by a Paris nursery and a Luxembourg office building.

“The DNB building was an attempt, at the moment that there was a financial crisis in the world, to reposition the Bank of Norway, and to mitigate between the city and the outer world,” explains studio co-founder Winy Maas in the film.

“These pockets or cockpits, they are designed like pixels over the building,” he says. “The whole building is suggested to have this big building composed of mini units.”

MVRDV chose a Norwegian brick for the facade to emphasise this approach. “Instead of using the corporate glass, this makes a more human and approachable attitude to the bank,” says Maas.

The irregular arrangement of the six-metre-wide cubes creates recessed openings across the facade, making space for sheltered terraces on each floor and a central arcade. Wooden bridges and staircases connect the floors inside and outside.

There is also a pedestrian route that cuts through the building, connecting the waterfront with a nearby railway station.

According to Maas, the pixellated form made it easy to create this variety of flexible spaces through the interior.

“Or we could kick out some pixels and they would give a slope for deeper sun angles to penetrate into the building,” Maas adds. “And you could cut them out for light on the sides, or say for outside spaces to smoke or to sit outside every floor. And last but not least we could transform the brick pixels into glass pixels so that also could create internal grounds and places.”

DNB employee Espen Brynsrud says the building’s most successful aspect is the way it encourages people to frequently meet and interact with one another.

“The people you need to meet are much easier to meet in this building than in our former offices,” Brynsrud says. “The working atmosphere here is a good one. This area is open – it’s an office landscape.”

The DNB Bank Headquarters is located within the waterfront development of Bjørvika Barcode. The other two buildings that make up the complex are by Norwegian studios A-Lab and Dark Arkitekter.

Maas co-founded MVRDV in 1993 with Nathalie de Vries and Jacob van Rijs. This movie is the ninth in a series profiling the firm’s work, which also includes a pair of seed silos converted into housing and a Paris office block with a hole in the middle.

Photography is by Jereon Musch.