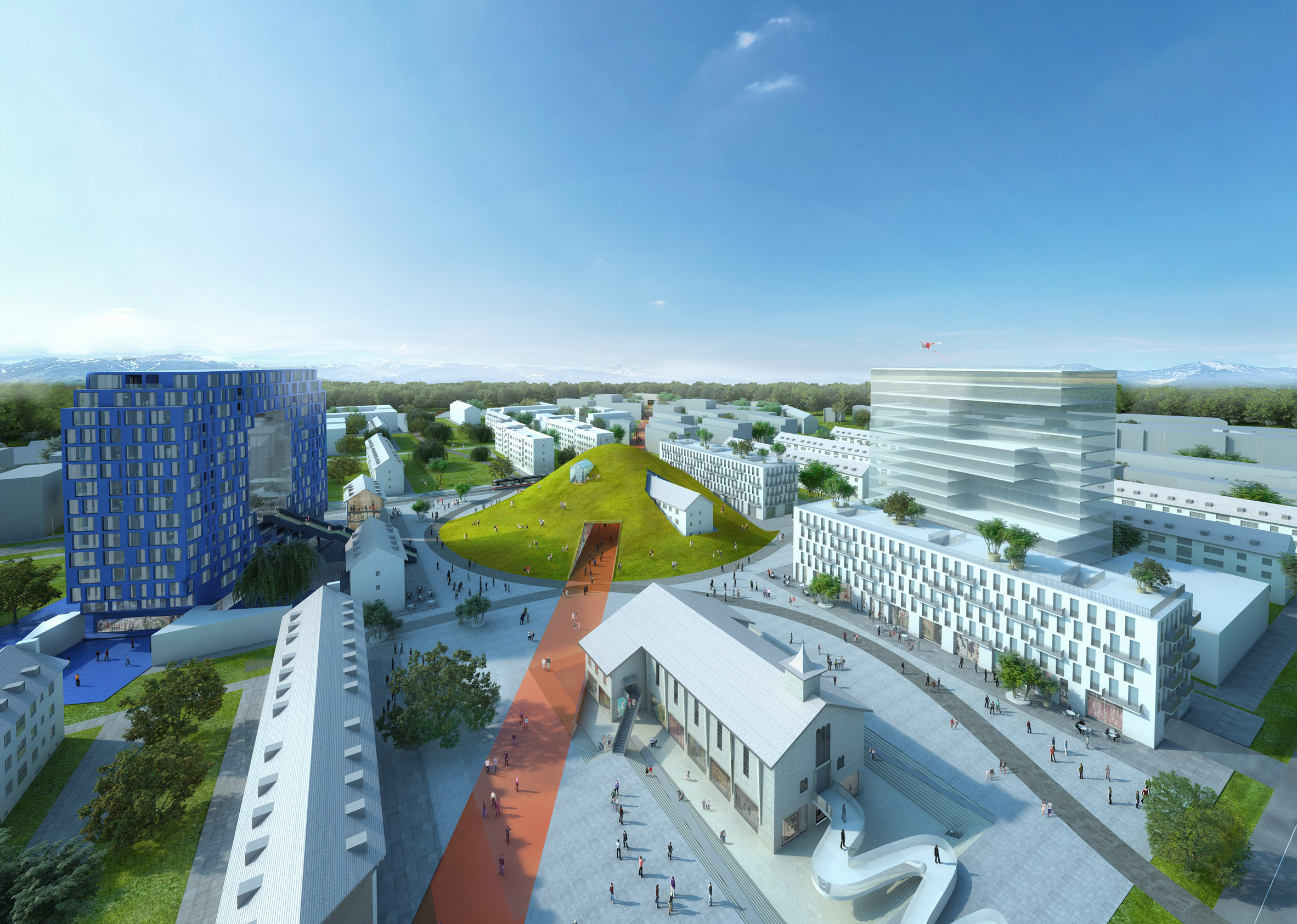 MVRDV has revealed its plans to redevelop the former Mannheim US Army camp in Germany, creating a green mound from demolished barracks and four residential towers that spell out the word home.

The Dutch firm‘s designs for the 144-hectare Franklin Mitte neighbourhood in Mannheim are intended to introduce density and diversity to the monotonous plan of barracks.

Aimed at local families leaving the German city due to a lack of an attractive housing, the new community will also connect an isolated area of the city with a scenic forest nearby.

The Green Hill will be made from the remains of demolished barracks buildings and built around and over existing buildings. As the central hub, it will house a shops, restaurants, cafes and community spaces.

A pathway cutting through the centre of the large mound and piercing through some of the old structures, will provide a connection to the residential areas.

From the top, the hill will provide a panoramic view of the four new housing developments arranged around it. Each one will be shaped to resemble a letter from the word home.

“The Green Hill is the central icon of this revitalised neighbourhood, a park heart of the community for people to walk on, relax, a great panoramic look out onto the neighbourhood and its HOME towers,” said MVRDV founding partner Winy Maas.

“With a series of investors a variety of typologies and interpretations of the past is celebrated,” he continued.

“A primary axis, the Europa Achse, cuts through the centre of the scheme, piercing through some of the old structures, while connecting the two surrounding nature areas and at the same time, creates transitions from old to new.”

A plaza will surround each building in the shape of the projected shadow of each letter. These markings will cut through both old and new buildings, as part of the architects’ intention to juxtapose the site’s history with the contemporary structures.

MVRDV will design and detail the 12,380-square-metre O tower and the 17,890 square-metre M building, while Stuttgart-based Haascookzemmrich STUDIO2050 will complete the H and the E blocks.

The towers will vary in scale, with the the O tower containing 120 apartments, and the M block housing 185 apartments.

The architects have also adapted each of the forms to different uses. The roof of the M tower will feature tennis courts, while the lower levels in the gap at the centre of the O will form a public stage with a staircase leading up from the ground level.

Each of the HOME towers will feature bright individual colours to make them stand out against the neutral-toned neighbourhood. They will be rotated towards the Vogelstang district and the highway to allow readability from a distance.

Built in 1606 as an innovative trading city, Mannheim was used as a US army base until 2011. Since then, much redevelopment has been planned for the desolate site, including another proposal by MVRDV to create a “village” of affordable housing.

Architecture students from Germany’s University of Kaiserslautern have built a wooden community centre for a refugee camp for some of the thousands of refugees now residing in Mannheim.

“The HOME towers signal a welcoming suggestion,” said Mass. “Especially needed in these days of doubt. Mannheim is an ambitious city with a strong social agenda, the site is currently occupied by 10,000 refugees, I find that impressive and to be honest, quite touching.’’

Winy Maas founded MVRDV was founded in 1993 along with Jacob van Rijs and Nathalie de Vries. The firm’s office is located in Rotterdam – a city that is fast becoming a hub for architectural innovation.

MVRDV’s most recent projects include a Y-shaped villa with rooftop swimming pool for Taiwan, a Copenhagen community centre that invites grownups to play and a shopping centre and night club complex for Seoul.