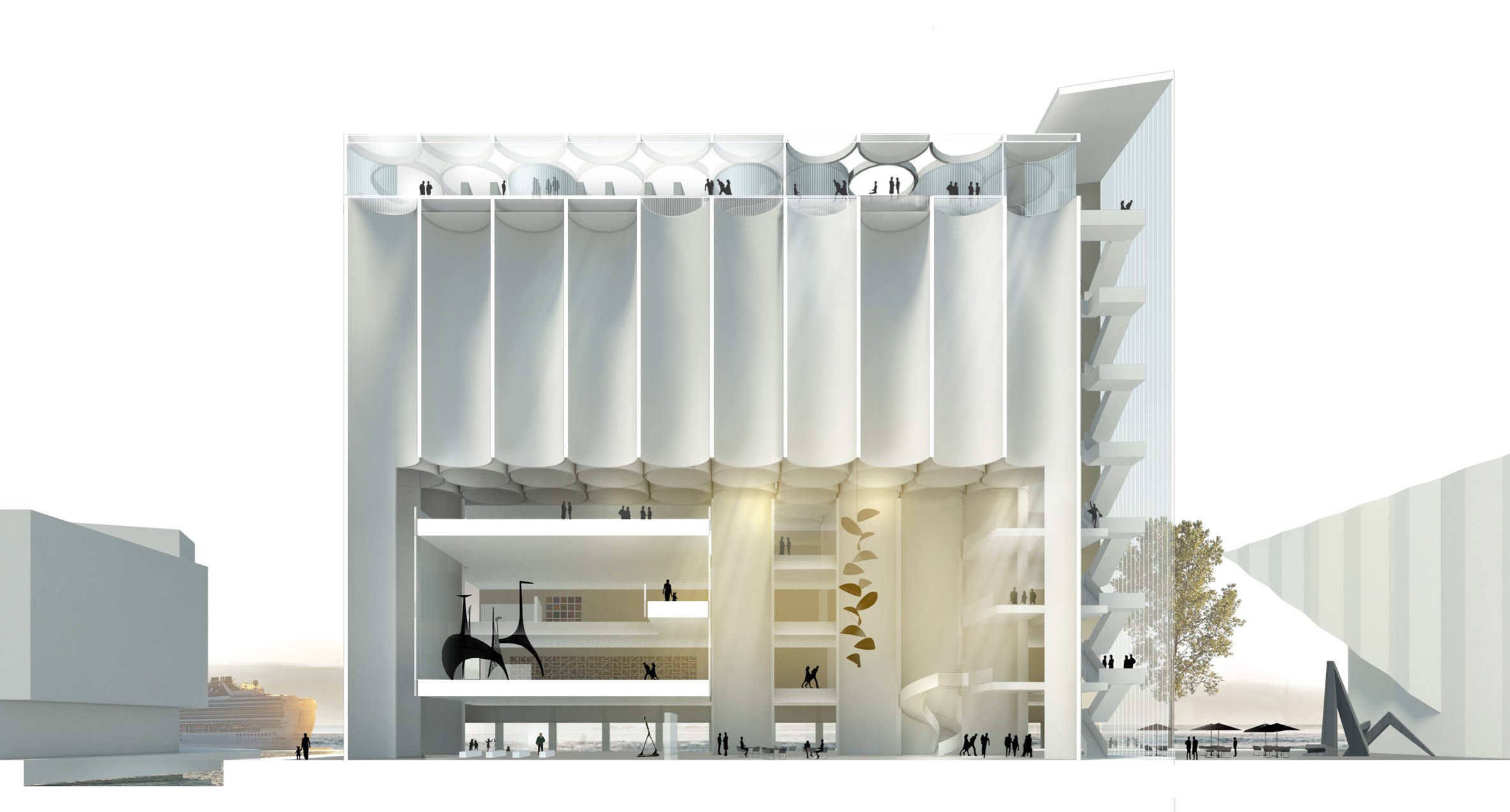 Barcelona-based studios MX_SI and Mestres Wåge Arquitectes have won a competition to covert a 1930s silo into an art museum and cultural centre in Norway.

The Kunstsilo contest called for proposals to transform the Odderøya grain silo, which was built in 1935 on the wharf Silokaia in Kristiansand – a city in the southern county of Vest-Agder. It stands next to the AL_A-designed Kilden Performing Arts Centre.

MX_SI and Mestres Wåge Arquitectes’ winning scheme was chosen for the quality of exhibition spaces but also for its respect of the historical silo – one of the first in Norway to be constructed with cylindrical cells made of reinforced concrete.

The proposal named Silosamlingen or Silo Collection suggests a few cuts into the interior of the silo, which is made up of three rows of 10 cylindrical cells. This will form part of the circulation route through the museum, and provide visitors breather-spaces.

Exhibition spaces of varying dimensions and sequences will be placed mainly in a six-storey former warehouse in front of the silo, and lit from above.

They will retain the original stair and lift tower, which has a gently pitched roof one storey higher than the silos.

Windows will be placed precisely to give views of the city and fjord, and to ensure enough natural light enters the building.

The project team were commended by the judges for their “respectful yet imaginative approach” and chosen above 101 entries from 17 countries, including China, Japan and the USA, as well as European countries and Norway.

“With its simple and powerful strategy, the project Silosamlingen demonstrates a crystal-clear combination of architectural self-assurance and humble respect for the silo building and its newly assigned task,” said the judges.

“The project balances elegantly between, on one hand, total loyalty to the silo building’s qualities, and on the other, an imaginative attitude to the inherently sculptural and spatial experiences it affords.”

The building will function as the regional art museum for the counties of Aust-Agder and Vest-Agder, featuring exhibition space for the Sørlandets Kunstmuseum and the Tangen Collection of Norwegian modernist art from the period 1930–1970.

Project organisers the Sørlandets Kunstmuseum, the Tangen Collection, Kanalbyen and Kristiansand Municipality are aiming to create one of the leading art museums in the Nordic countries.

“In the monumental silo from 1935, we plan to build one of the leading art museums in the Nordic countries, a landmark and cultural powerhouse in the region – and in the national context,” said mayor of Kristiansand Harold Furre.

“We believe this must be one of Norway’s most exciting museum buildings,” he continued.

The architects also wanted to create a transition between the silo and the Kilden Performing Arts Centre next door, and so will slotted outdoor spaces in between the two buildings, as well as a cafes, a museum shop and temporary exhibitions.

A diagonal passage will cut across the silo space connecting the wharf-side promenade with the urban spaces to the back.

Work is expected to begin on the museum this year, with its opening slated for 2020.

British designer Thomas Heatherwick also chose to enjoy the “tube-iness” of a grain silo in his plans to transform a historic building in Cape Town into an art gallery at the V&A Waterfront museum – expected to complete later this year.

Heatherwick will carve hollow an elliptical section out from the centre of the building to create a grand atrium for the building dedicated to contemporary African art.

Further silo conversion projects include a former building in Deventer turned into a community food hall overlooking the harbour and disused structure in Malmö reimagined as a crematorium and “vertical cemetery”.

The post MX_SI and Mestres Wåge Arquitectes to transform 1930s silo into art gallery in Norway appeared first on Dezeen.