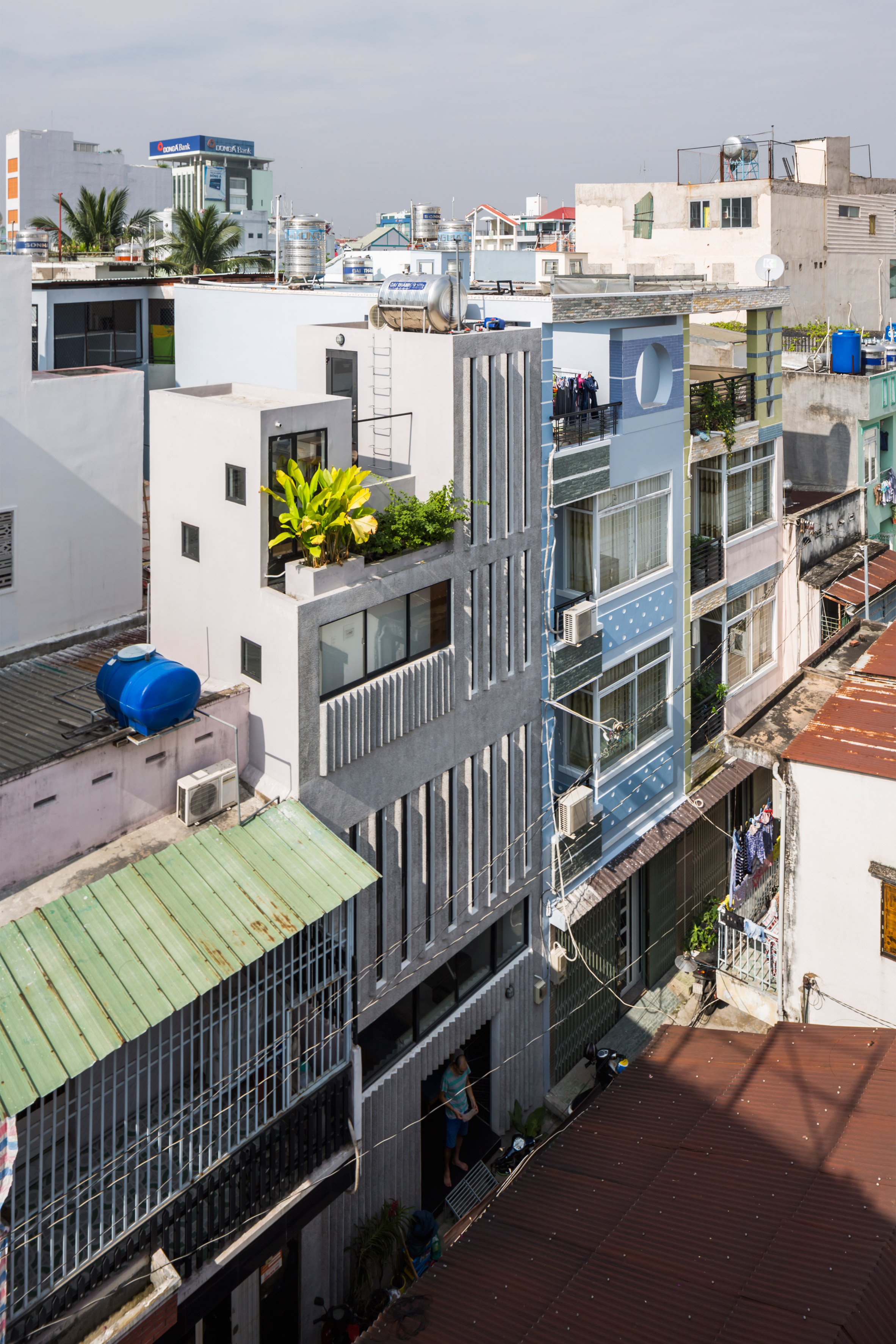 The washed-terrazzo facade of this house positioned on a compact plot in Ho Chi Minh City is punctuated by tall, narrow windows that allow natural light to enter but providing privacy where required.

Local office Khuôn Studio and Phan Khac Tung designed 18 House for a couple with a young daughter, who wanted an attractive and practical home to be built on a site measuring just 18 square metres.

“We approached the design with a goal to strike a balance between utilising the space to its fullest and interpreting the creative freedom we had been given,” said a statement from the project team.

To maximise the limited floor area, the architects developed a proposal with living spaces spread over several levels.

The house extends up to match the height of neighbouring structures, and features a street-facing elevation punctured by rows of narrow openings with varying heights.

The windows, which together occupy half of the facade, are individually operable so the owners can accurately control ventilation within the building.

“The exterior design was developed based on the notion of porosity,” said the architects. “These openings help maintain the privacy level whilst at the same time keep the interior space exposed to daylight.”

Spaces between the windows feature angled protrusions that protect the interior from direct sunlight and overlooking by the neighbours.

To prevent the necessary circulation areas from diminishing the internal floor space, the staircase that connects the various levels was pushed to the perimeter of the building.

The positioning and construction of the stairs allows spaces underneath to be used for practical purposes such as accommodating bathrooms and storage.

The minimal staircase features wooden treads that extend out from the wall and are supported by metal rods suspended from the ceiling above.

The painted rods form a simple balustrade that ensures the light and airy feel of the interior is not disrupted. For safety, the architects suggested adding rope nets to the staircase once the daughter is beginning to walk.

A large opening at street level allows a scooter to be wheeled into an area that functions as a garage. This space is separated by a step from a compact kitchen and lounge, with a restroom tucked under the stairs.

The double-height void above the parking area could be adapted in future to accommodate an additional loft level if required by the owners.

The first-floor bedroom features a raised platform with the child’s elevated bed positioned against one wall.

Along the wall facing the street, the angular surfaces applied externally are repeated inside to deflect the morning sunlight and prevent the room from overheating.

The second floor provides space for another bedroom featuring a tiled headboard. A toilet is located beneath a final flight of stairs that ascend to a shrine on the upper storey.

On the other side of the bedroom, another set of steps leads up to a mezzanine reading loft with shelves built into the deep sills of a row of windows.

A doorway alongside the worship space opens onto a roof terrace, from which some steps extend to an additional seating area on the roof of the reading room.

At another property in Vietnam’s Central Highlands, Khuôn Studio used perforated concrete blocks to form walls that allow light to filter into the rooms and courtyards.

Photography is by Hiroyuki Oki and Thiet Vu.