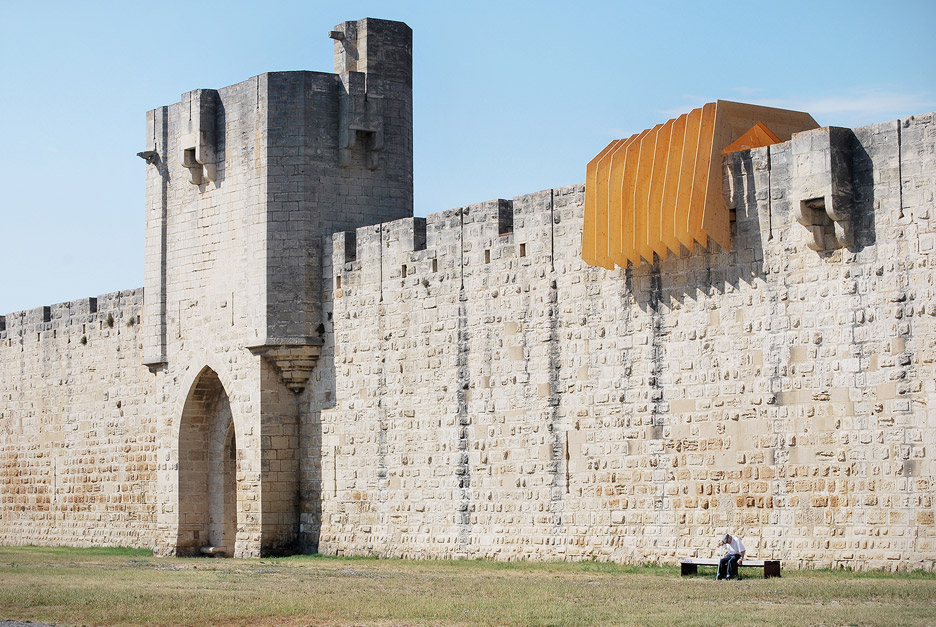 This tunnel made up of wooden profiles was designed by NAS Architecture to arch over the fortifications surrounding a historic commune in the south of France (+ slideshow).

Described by NAS Architecture as a vortex, the Haven installation was commissioned by the heritage organisation National Monuments Center of France. It wraps over the medieval ramparts surrounding Aigues-Mortes.

The pavilion is made up of 10 plywood sheets that each feature a uniquely shaped cutout. When assembled in a linear formation, the negative spaces line up to create an arched tunnel.

“The aim was to play with contrasts and to provide another way for walking on the old walls,” architect Johan Laure told Dezeen. “We wanted to create a negative shape that acted as a vortex, and metaphorically represented the passage of time.”

“The wooden shape corresponds to two different uses – the interior and the exterior,” Laure said. “From the interior the aim was to create a new geometry to the passage by disrupting the straight lines of the rampart which were necessary for a defence construction like this one.”

Elevated hoardings from the Middle Ages were a starting point for the studio, whose past projects include a mirrored waterfront pavilion in Marseille that moved with the wind. The hoardings provided a reference for how to install the structure at such a height.

They also sought to emphasise the contrast between the ramparts and the wooden sheets, aiming to create a pavilion that is “as present as the rampart on some points of view”.

“We were inspired by the density of the materiality,” said Laure. “The rampart is strong and very present, so we were thinking about a system that can allow the pavilion to be as present as the rampart on some points of view and sometimes very fragile.”

From the outside, visual trickery makes it difficult to understand how the structure is suspended, and the angular form appears to take on a “softer shape”.

“From the outside the pavilion appears to have a softer shape than the interior,” said Laure. “At first glance you can’t understand how the pavilion is hanging, and the aim was to create a shape that seems to interact with the rampart as a plier, and is humble and respectful to its history.”

Other modern additions to historical fortresses include a pavilion of wooden walkways in the grounds of a Copenhagen castle, and a limestone-clad visitor centre at a Portuguese stronghold.

Photography is by NAS Architecture.