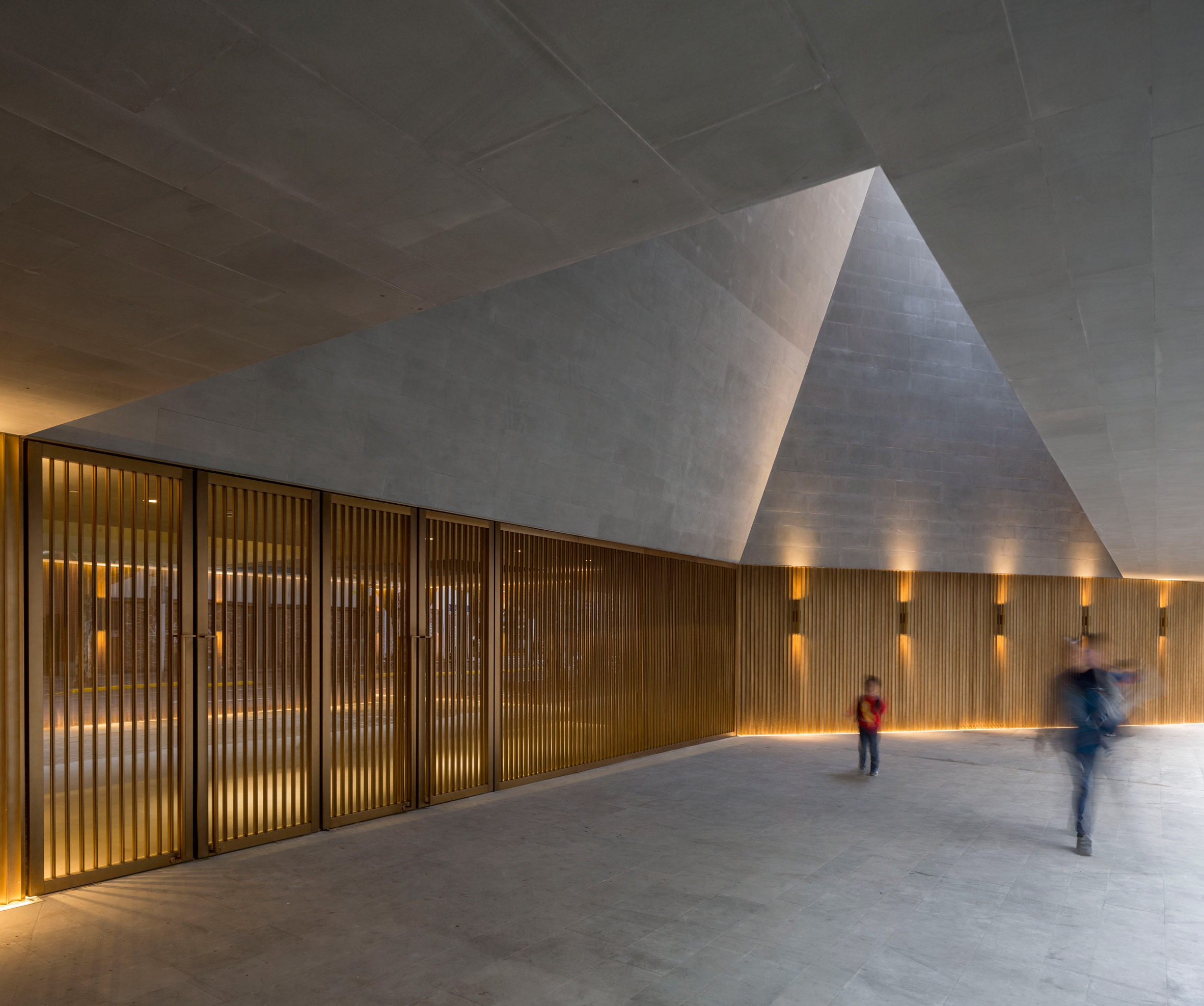 Chinese studio Neri&Hu has used smooth grey stone and fluted bronze to revive the grandeur of a 1930s theatre in Shanghai.

The locally based firm, led by architects Lyndon Neri and Rossana Hu, sought to restore the character of the old theatre, which had lost much of its original details, thanks to piecemeal adaptions over the years.

“The primary design challenge was to recall the clarity and unity of the historic building in all its grandeur,” said the duo, “while creating an architecture that would not only be relevant today, but have the potential to become a lasting and significant landmark.”

The biggest changes were made to the building’s facade, which is now encased in smooth slabs of grey-toned stone.

At ground-floor level, the facade is set back to create a small, sheltered plaza. As visitors step into this space, a cavernous lightwell is revealed to them, carved out of the stone volume overhead.

Further drama is created by the fluted bronze walls that wrap the inside of this space, highlighting the building’s entrance. Neri&Hu intended these to be reminiscent of theatre curtains.

Similarly, the glazing is also flanked by lengths of bronze.

Inside, stone and bronze is used in a similar way, creating a foyer with matching walls, floors and ceilings. Skylights also feature in this space, creating dramatic contrasts between areas of light and shade.

“Drawing inspiration from the theatrical acts which take place within, the carved spaces of the interior and exterior atriums were conceptualised as a series of dramatic scenes,” said the designers.

“Scenes of varying spatial and lighting configurations are experienced as one moves throughout the space, intensifying as one explores deeper into the building.”

“Several apertures take advantage of the changing light conditions throughout the day to create an ever-changing and dynamic environment, while supplemental evening lighting mimics these conditions for added drama,” they added.

The layout of the building is kept simple. A box office is located at the front, allowing people to buy tickets without entering the building, and the theatre auditorium is at the back, behind the staircases and toilets.

Offices and dressing rooms can be found on the first floor.

Neri and Hu founded their eponymous studio in 2004. They ranked at number 71 in the Dezeen Hot List – a guide to the most newsworthy players in the architecture and design world.

Past projects that the duo have completed in their home city include a 1950s-inspired burger restaurant, a bamboo-lined punch bar and a hotel in a converted army headquarters. They also have their own design gallery, called Design Republic Commune.

Photography and movie are by Pedro Pegenaute.