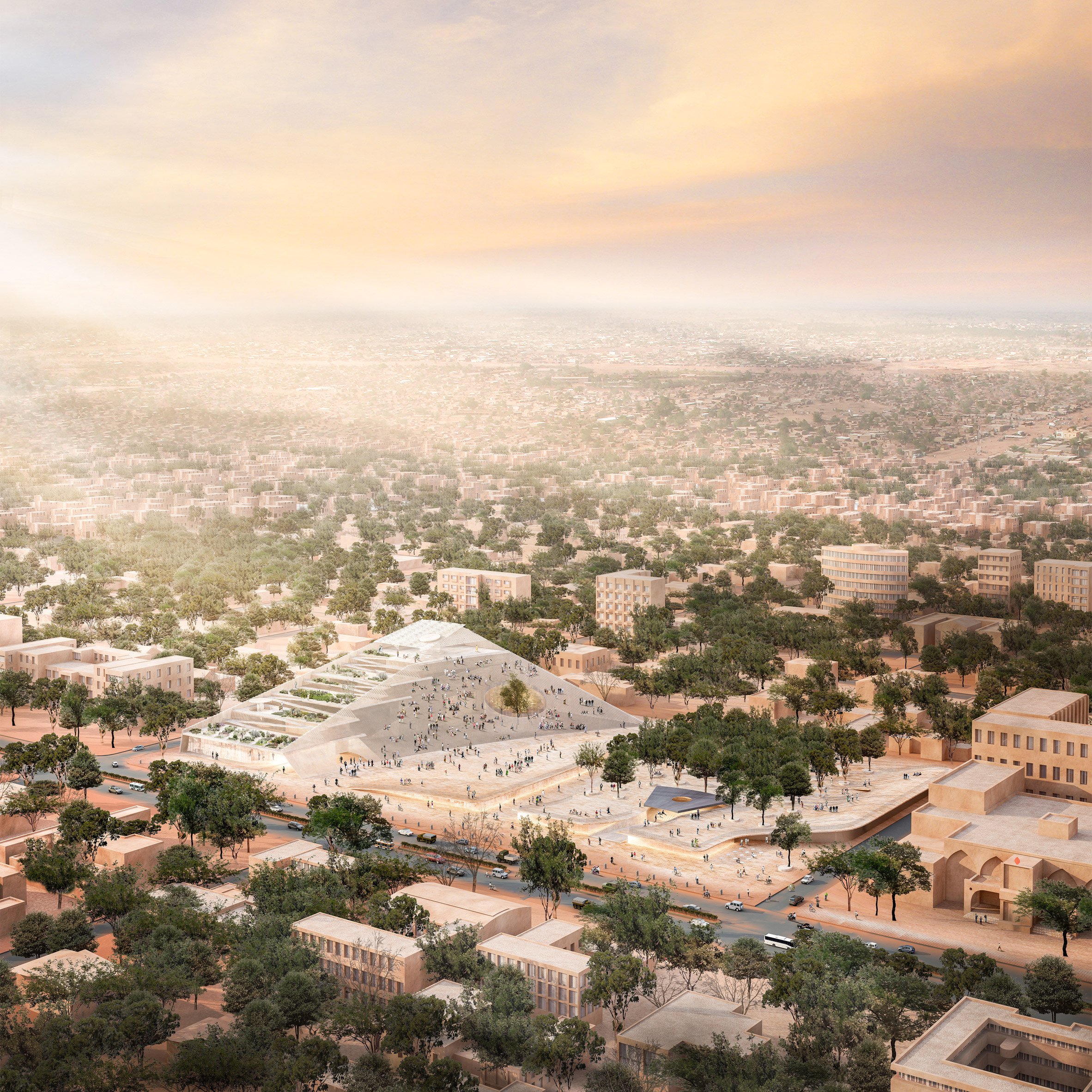 Movie: in this exclusive Dezeen movie, Burkinabe architect Diébédo Francis Kéré explains how he is rebuilding his country’s National Assembly to be “more than just a simple parliament building”.

In 2014, the Burkina Faso parliament building was set ablaze during the country’s revolution, putting an end to 31 years of dictatorial rule. Kéré is now leading the scheme to build a new National Assembly on the site in the capital of Ouagadougou.

Talking to Dezeen at the Serpentine Gallery – where he has just completed this year’s pavilion – Kéré explained the ideas behind his giant ziggurat structure.

“I was lucky to be called to think of how to design a [new parliament building] that responds to Burkina Faso and the needs of the people,” Kéré told Dezeen.

“I wanted to create this public space with everything,” Kéré added. “We have a garden around it, we have the pyramid which is elevated, we have a cornfield on top. It is more than just a simple parliament building.”

The stepped structure was designed to be inhabited by the public. At six storeys high, it will offer an elevated view of the city, which has a very flat topography.

“People can go on top of it at any time, during the day and during the night,” said Kéré. “Symbolically it is transparent, it is open.”

The roof hosts several green terraces that will be accessible to the public and are intended to serve as an educational tool to encourage urban farming. The facade will also act as solar shading, allowing air to freely circulate inside the building.

The Berlin-based architect looked to Burkinabe governing traditions when designing the interior. A tree stands at the centre of the building, referencing the “arbre à palabres” (tree of discussion) under which villagers make decisions in rural areas of Burkina Faso.

The 127-seat assembly hall is part of a larger masterplan the Berlin-based architect envisaged for the site.

The scheme pays homage to the site’s history by transforming the ruin of the previous building into a memorial. It takes the form of a shaded depression in the ground where rainwater is collected and used for on-site irrigation.

A grove of trees will surround the memorial, creating a seating and gathering space.

For the recently unveiled Serpentine Pavilion in London’s Kensington Gardens, Kéré created an oval-shaped structure made from indigo-blue wooden batons that is topped with a slatted timber roof.

Kéré is from Gando in Burkina Faso but moved to Germany to work as an apprentice before studying architecture and engineering at the Technische Universität in Berlin.

He is known for his socially driven and sustainable approach to architecture, which he has applied to several projects in his home village, as well as installations for major exhibitions in London, Copenhagen, Milan, Chicago and Venice.