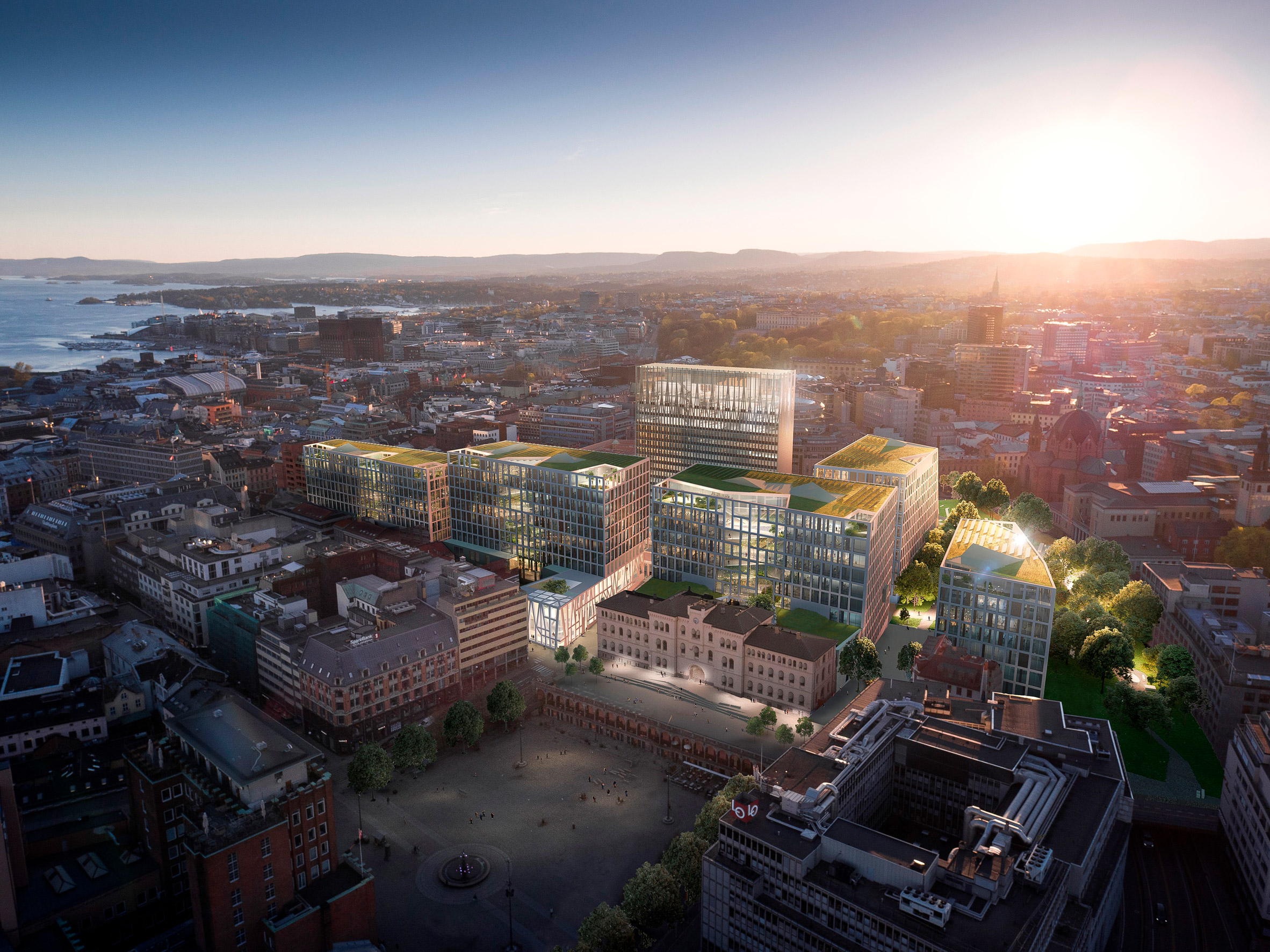 The part of Oslo’s government quarter damaged during the 2011 terrorist bombing will be replaced by one of two proposals – one by a team including Haptic and Nordic, and another by a team featuring A-Lab and LPO Architects.

Statsbygg, the Norwegian Directorate of Public Construction and Property, organised a competition calling for proposals to redevelop the Regjeringskvartalet, an area containing several ministry buildings, so that it meets new security requirements.

The Regjeringskvartalet, and specifically a block housing the prime minister’s office, was the target of a car bomb attack on 22 July 2011 that killed eight people and caused significant damage to several buildings.

Two winning teams were selected in the competition – although only of the two designs can go forward.

The second, called Team Urbis, is made up of architects Nordic and Haptic, engineering firm Ramboll, landscape studios SLA and Bjørbekk & Lindheim, and consultants Asplan Viak, COWI, Aas-Jacobsen, Per Rasmussen, Scenario and NIKU.

The proposal by G8+ deals with the public domain and, in particular, the creation of a new square and continuous pedestrianised routes that weave between a cluster of private office buildings.

“The proposed concept makes the government quarter an accessible and active part of the city, while representing a responsible, safe and democratic state,” said G8+. “The project focuses on the public spaces and the lower, active floors of the project.”

The large footprints of the buildings allow lower volumes to achieve the required internal floor area. Public facilities are distributed across the ground floor, with particular attention paid to the articulation of the facades at this level.

Suspended above the public areas, a series of bridges create connections between secure private office spaces for ministries housed in new and existing buildings.

The scheme presented by Team Urbis involves three existing and six new buildings, totalling around 150,000-square-metres of development and providing around 5,700 workplaces.

The design is based around two urban squares and a new park, with low-rise office blocks integrated into the existing city fabric.

Facades featuring setbacks aid the connection between the buildings and their surroundings, as well as allowing sunlight to reach the new urban spaces.

Gudmund Stokke, Team Urbis leader and principal partner of Nordic, said: “We have designed a timeless scheme which has the potential of enhancing the central areas of Norway’s capital city and providing great working conditions for coming generations of government workers.”

The bombing in Regjeringskvartalet was one of two politically motivated attacks on 22 July 2011 by far-right terrorist Anders Behring Breivik.

Behring Breivik set off the bomb in Oslo city centre first, before journeying to the island of Utøya and murdering 69 more people, mostly teenagers, who were attending a youth summer camp associated with the social-democratic Labour Party.

Statsbygg launched its design competition for new governmental buildings in 2016.

The ministry will now consider detailed proposals from G8+ and Team Urbis, before naming the winner of the building contract in autumn 2017.

Other designs created in response to the 2011 attacks include a ring-shaped memorial and a new learning centre, both now realised on Utøya, and a landscape intervention that has now been scrapped following years of opposition from locals.