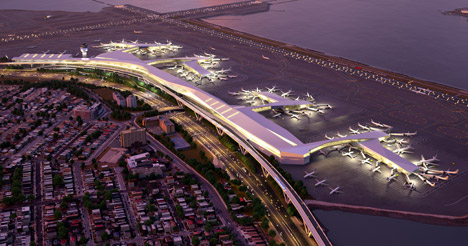 On Monday, New York Governor Andrew Cuomo and US Vice President Joe Biden announced that the airport in the Queens borough, which consists of disconnected ageing terminals, would undergo a complete overhaul.

The project calls for tearing down the existing buildings and constructing a large, unified terminal.

Those firms submitted their ideas as part of the governor’s Master Plan Design Competition for New York’s airports, launched in 2014. Rather than selecting one winner, the governor extracted elements from each firm’s submission.

“New York had an aggressive, can-do approach to big infrastructure in the past – and today, we’re moving forward with that attitude once again,” said Cuomo. “We are transforming LaGuardia into a globally renowned, 21st-century airport that is worthy of the city and state of New York.”

Terminal B, also known as the Central Terminal Building, will be demolished and replaced by a larger facility, with a layout intended to reduce aircraft ground congestion and gate delays, in addition to providing a “world-class passenger experience”.

This new terminal will be linked to Terminals C and D, which also will be demolished and rebuilt. Select parking garages will also be torn down and reconstructed.

Passengers will access gates via raised pedestrian bridges that will be high enough for aircraft to pass under. This “island-gate system” will help create nearly two miles (3.2 kilometres) of new taxiway space.

“This allows for a more efficient circulation of aircraft and reduced taxi-in and taxi-out times, which will yield shorter and fewer gate delays – a dramatic difference from today’s LaGuardia,” said the governor’s office. “In addition, this change will produce overall reduction in carbon emissions from idling aircraft.”

“As Governor Cuomo has made clear, right now there is a once in a lifetime opportunity to implement a comprehensive design that will make LaGuardia Airport the truly world-class experience New Yorkers and visitors deserve,” said SHoP in a statement.

“SHoP is proud that our ideas for an integrated terminal could contribute to solving that urgent need at this essential gateway to the city and the state.”

Dattner Architects added: “We are extremely proud to have been able to contribute planning and design concepts in the Queens borough, which will transform LaGuardia Airport into a fully integrated multi-model development befitting New York City.”

The new terminal will be constructed closer to Grand Central Parkway, a major highway that passes by the airport.

The project also entails adding ferry service and a rail link. Direct passenger boat service to the historic LaGuardia Ferry Terminal will be restored. The plan also calls for building a new transit station that connects to the Willets Point train station in Queens.

Construction of the first phase of the project is expected to cost $4 billion (£2.5 billion). If all approvals are granted, the Port Authority of New York and New Jersey, which operates the airport, will break ground in 2016.

City officials have long discussed renovating or moving La Guardia Airport. In 2014, US Vice President Joe Biden likened it to an airport one might find in a third-world country.

In a 2012 survey conducted by Travel + Leisure magazine, La Guardia was named the worst airport in the country. In a current ranking of the 29 largest American airports, La Guardia ranks last in on-time departures.

Other recent airport schemes include a new Gensler-designed terminal for animals at New York’s JFK airport and a proposal by a graduate student to elevate runways over city buildings in Stockholm.