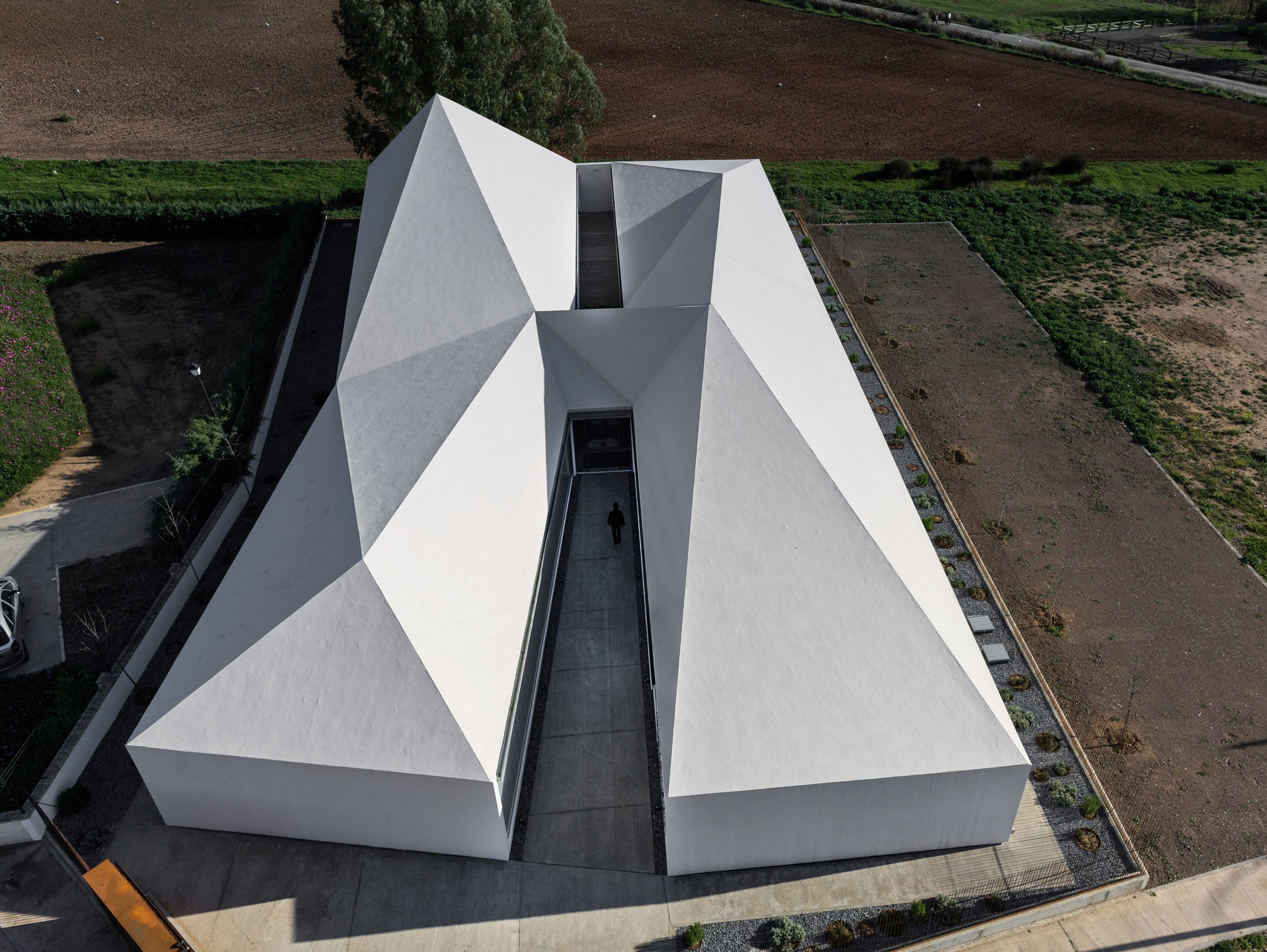 An angular roof folds over this business centre for startups in western Spain, which Seville-based NGNP Arquitectos has split into two blocks by a narrow courtyard.

The 789-square-metre Centro Integral de Desarrollo, or Integral Development Centre, acts as an incubator for entrepreneurs and is set on the outskirts of the small town of Calamonte in Spain’s Badajoz province.

NGNP Arquitectos separated the one-storey building into two wings and angled the roof to create four peaks as a reference to nearby hills.

“The roof emerges as the fundamental element of the design,” said the architects.

“Seen from afar, the building completes its compact presence thanks to it, dialoguing with the landscape of hills surrounding the place.”

The varying heights of the peaks are designed to suit the different spaces inside the building. Its tallest point creates a high ceiling over the assembly hall, while the lower peaks cover the office spaces.

The varying roof heights provide a “dynamism and special character to interior environment”, according to the architects.

The concrete and steel roof structure, and the brick walls are rendered uniformly with a white liquid polyurethane, which provides a protective waterproof layer while also enhancing the unusual geometric form.

On the western side, the volume is rectangular, while the end of the other volume is slightly angled outwards to open up to the narrow patio that cuts through the centre.

The narrow courtyard leads up to a small lobby that bridges the two volumes and provides separate access to the different spaces within, allowing the two parts of the building to be used independently.

“This zoning of the small building solves the problem of the compatibility of use in function of the different schedules that each zone has,” they explained.

“Thus, an entrepreneur can have night access to his office without having to open the entire building, which makes it much safer to use.”

On the other side of the lobby, the gravelled courtyard is planted with a tree and functions as a more private space. It is accessed from the hallway adjoining the meeting room and the assembly hall.

A translucent wall made from a double layer of polycarbonate runs along one side of the outdoor space, providing the offices with privacy and diffused natural light.

Windows placed along the outer walls frame views to the surroundings, and garden areas.

Other buildings designed to house startup incubators include one made by retrofitting a shipping container and a wooden bleacher, while another occupies a former New York firehouse.

Office extension with a faceted copper roof by Emrys Architects

Photography is by Jesús Granada.