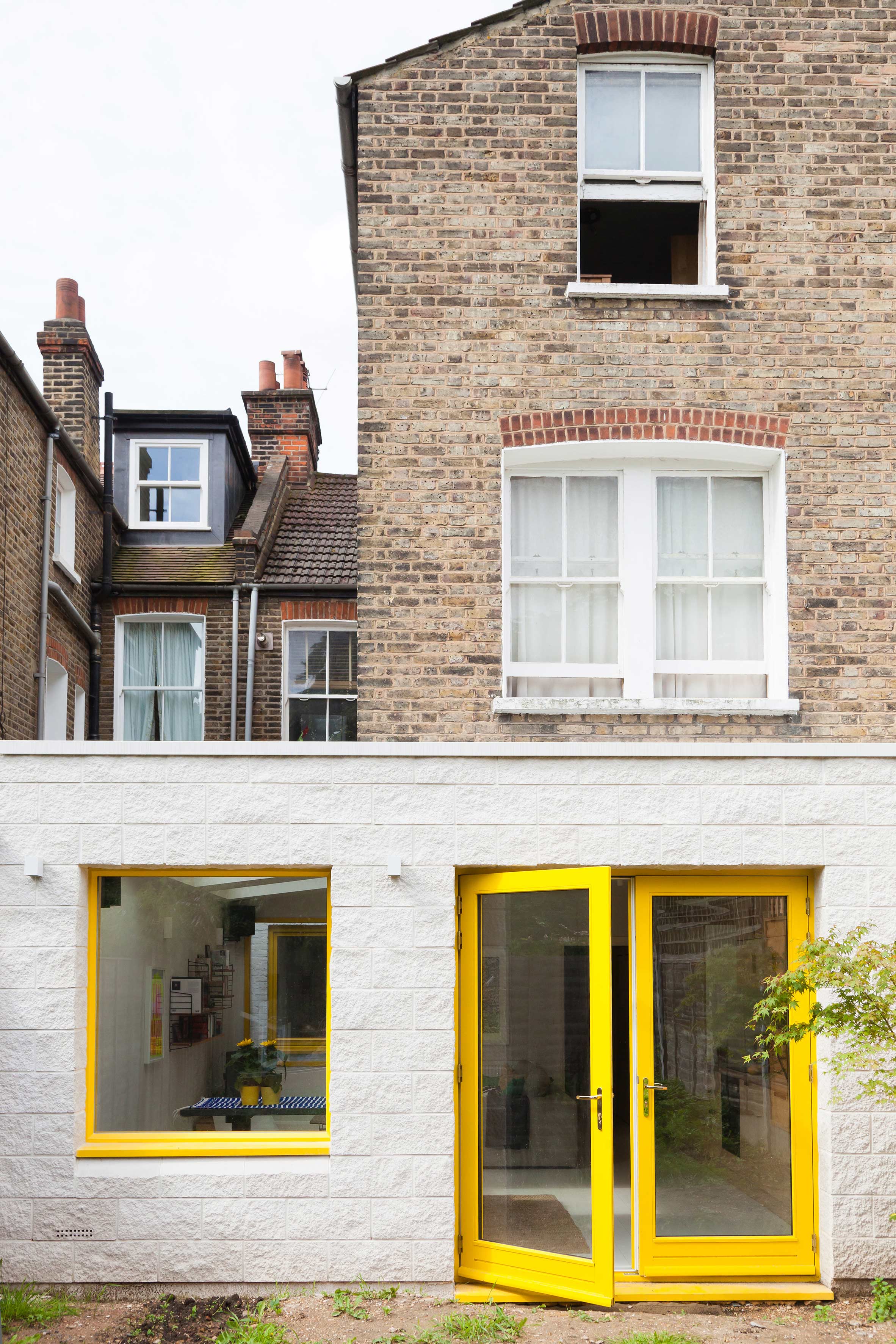 A yellow and white colour scheme finishes this London house extension by Nimtim Architects, which is shortlisted in 2017’s Don’t Move, Improve! competition.

The British practice added a large but simple square extension to the rear of the property, a ground-level Victorian flat located in London’s Herne Hill.

To cater to the changing and unpredicatable needs of the young professional clients, Nimtim rearranged the existing floorplan to house a second bedroom, but moved the kitchen and living space to the open-plan extension.

With the kitchen situated along one wall, the architects envision the remaining open space as adaptable to living, dining, play or study areas.

The clients requested “bold and playful” materials, so Nimtim finished the room with spots of bright colour to help to highlight the architectural features of the extension.

“We chose a simple and playful colour palette to add a new modern layer to the traditional architecture of the property,” said Nimtim co-founder Nimi Attanayake. “The colour also distinguishes the new structure, architectural modifications and additions from the original layout.”

Buttercup yellow is used on the window and door frames, where it contrasts with white interior and exterior walls.

A grassy green — similar to Pantone’s recently announced 2017 colour of the year – also makes an appearance on the sides of ceiling beams, while a spectrum of yellow-greens features on the trapezoid-tiled splashback.

This splashback was designed and made by the client with their friend Emma Louise Payne, a ceramic designer who handmade and numbered them to the specific pattern.

A limited budget of £75,000 drove many of Nimtim’s material choices, including split-faced concrete blocks with white-marble chippings for the exterior.

The blocks forming the window sills were cut on the horizontal to create the appearance of a torn edge.

“The blocks highlight the new addition yet still reference the existing property’s masonry characteristics and the variety of texture in the original London Stock brickwork,” said the architects.

Inside, both new and existing pine floorboards are painted white, while bespoke kitchen cabinetry is made from treated birch plywood.

In addition to the rear picture window, light enters the extension through three skylights, also trimmed in yellow, and a further window that faces a small inner courtyard.

Nimtim was founded by Attanayake with Tim O’Callaghan, who both qualified as architects in 2008. The young firm has recently completed another London house extension, this time with parquet flooring and blue-stained woodwork.

For its work on Yellow House, Nimtim is among 24 projects shortlisted in Don’t Move, Improve!, a competition to find London’s best home extensions.

Other nominated projects include a sunken Japanese-style bath and a spacious kitchen built from pale bricks.

Photography is by Megan Taylor.