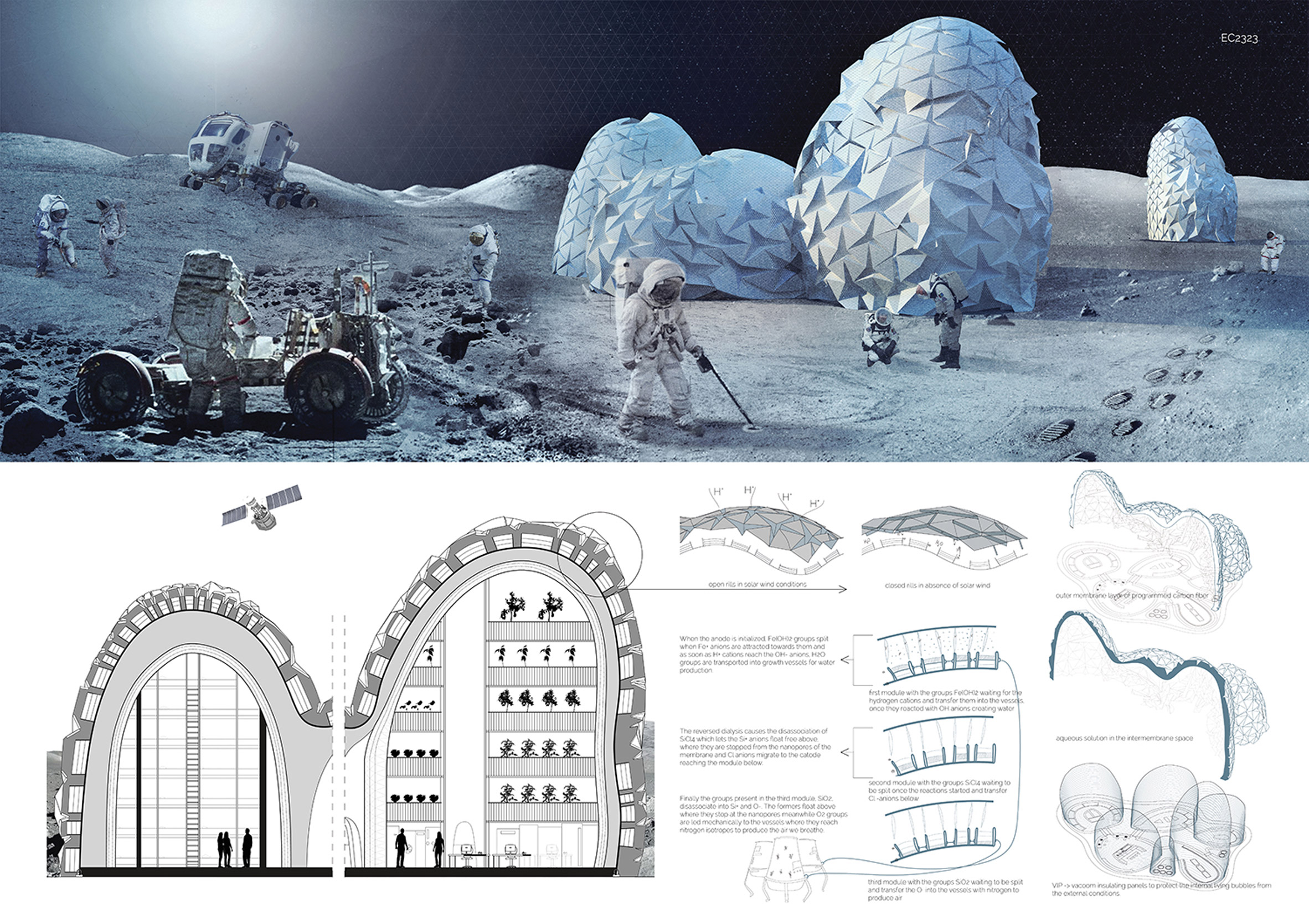 Nine space-age designs have been revealed as the winners of the Moontopia competition, which asked architects and designers to visualise life on the moon.

Entrants to the Moontopia competition were asked to draw up plans for a self-sufficient lunar colony for living, working, researching and space tourism.

One winner and eight runners up were selected from hundreds of proposals submitted to the competition, which was organised by architecture and design magazine Eleven, and ran from August to November 2016.

See the nine top entries to the Moontopia competition, selected by a jury of NASA designers, space-architects, academics and the editorial team at Eleven:

The winning project involves the gradual colonisation of the moon through 3D printing and self assembly.

The carbon-fibre structures, based on origami, would be assembled by astronauts in the projects initial stages, with the chance for space tourism as the colony becomes more established.

The runner-up in the competition proposes a habitat that could be used to investigate and exploit the moon’s resources without damaging them.

Rather than building directly on the moon’s surface, instead the habitat would be tethered to it by a cable and orbit around it.

Voted as the people’s choice award through an online vote, Modulpia is a modular settlement designed for ease of construction and assembly.

The settlement would be organised in phases, with a factory installed first, and followed by research laboratories and accommodation for researchers.

Given the first of six honourable mentions in the competition, this proposal provides homes for up to 3,000 “post-human moon citizens”.

The habit would support the first post-human industry of asteroid mining, as well as space tourism.

The second honourable mention went to Upside Down, a concept for interplanetary exploration and subsequent colonisation.

Using the moon as a test site to gather experience and resources, inhabitants would then move to colonies on Mars.

Honourable mention number three, Womb, imagines the moon as a place of contemplation and sanctuary from the materialistic planet Earth.

Here, people live in bubbles rather than houses, and float from place to place.

The fourth mention was handed out to a plan to build communities within the moon’s craters. Protective covers would help to fend off asteroids, but also host observation telescopes.

The fifth project, Lunar Oasis, is based on a hypothetical scenario that takes place 140 years after man’s first landing on the moon in 2110.

In this third wave of the moon’s human colonisation, an oasis would created in response to people’s wellbeing in relation to the built environment.

The Aerosphere by Stephanie Stiers

The final award went to the smallest habitat submitted to the competition. The Aerosphere focuses on space tourism, facilitating short-term trips of one lunar day in a transparent sphere.

Foster + Partners to 3D print buildings on the moon