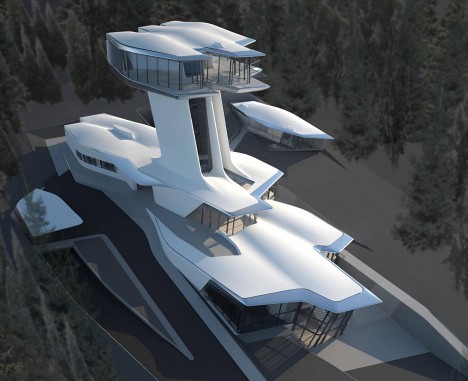 Zaha Hadid 1950-2016: Norman Foster reflects on Zaha Hadid‘s Capital Hill Residence in the first of a series of interviews with top architects, which Dezeen and Architizer filmed for our video tribute to Hadid last month (+ movie).

Capital Hill Residence is a villa in Barvikha Forest close to Moscow, which was designed for Russian property developer Vladislav Doronin. Completed in 2011, it is the only private house that Hadid built during her lifetime.

In the movie, which Dezeen filmed at Foster + Partners‘ offices in London, Foster compares a computer visualisation of the project to photographs of the completed building.

“It’s an extraordinary resolution of this futuristic image and the built reality,” he says. “Zaha the futurist, dynamic architect of the future was also delivering.”

Foster recalls meeting Doronin recently at a dinner party, who enthusiastically showed him photographs of the building.

Hadid died suddenly from a heart attack in March. Foster says he regrets that he was not able to tell Hadid how happy her client was with the finished project.

“Zaha was a fantastic architect. You never take that for granted, but it’s a given,” he explains.

“But to me Zaha was also a very dear friend. It was a tremendous disappointment that I was never able to tell her this insight from one of her clients.”

Foster and a host of other leading architects including Bjarke Ingels, Richard Rogers, Daniel Libeskind and Amanda Levete paid tribute Hadid in our memorial video, which was screened at the Architizer A+ Awards in New York.

We’ll be publishing more movies from the video interviews we conducted over the coming weeks. You can watch them as we publish them on our YouTube playlist: