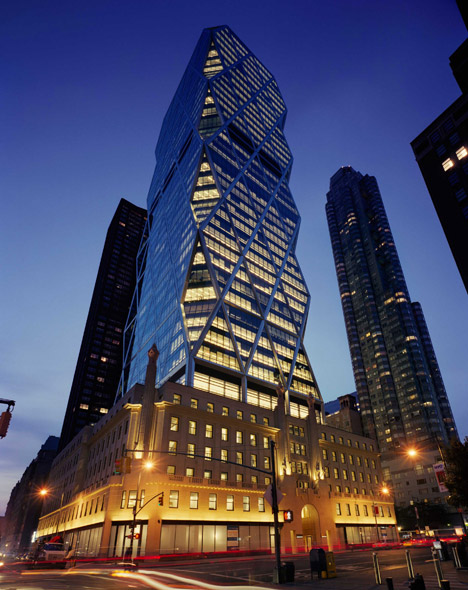 A decade after the final beam was placed atop the Norman Foster-designed Hearst Tower, the architect has returned to the building to mark its anniversary with a film captured using an unmanned aerial vehicle (+ movie).
The 46-storey Hearst Tower was the first major building commissioned in New York following the attacks on the World Trade Centre in 2001, and topped out on 11 February 2005. It officially opened its doors in 2006.
Image courtesy of Shutterstock
The new movie was shot inside the building using an aerial camera drone, fitted with film-quality video cameras.

“The idea that you are using the most up-to-date technology, something that literally didn’t exist 10 years ago, to capture the building now 10 years on – that is, I think, very symbolic,” says Foster in the movie.
“It’s one thing perhaps to come in through the front door, to look and to see the space, but to actually move through it is something I think that one never takes for granted.”

The 79,500-square-metre skyscraper is the headquarters of the Hearst Corporation, one of American’s major media companies, and houses the offices of some of its biggest magazines – including Esquire, Harper’s Bazaar, Good Housekeeping, Elle and Cosmopolitan.
Foster’s faceted glass tower sits on top of the original six-storey brick International Magazine Building, which was commissioned by William Randolph Hearst in 1926 and completed by architect Joseph Urban in 1928.
“The idea that it is a marriage of the old and new, the most sustainable tower at that time, the idea that the base could be like the town square, the piazza, everybody would pass through it, was so exciting, so radical,” says Foster.

Produced by McConnell/Hauser, with a camera drone supplied by Perspective Aerials, the movie passes through the huge atrium that occupies most of the space inside the older structure.
“The idea that you can change the scale and you can also incorporate historic rooms and you are transported back in time when you enter that space, I think that’s just… it’s really great,” he adds.
“This is truly a home. I work here. In that sense I am part of the community. I can’t say that about any other building, no matter how close I get to it.”

The drone hovers over the two-storey-high waterfall created in collaboration with glass specialist Jamie Carpenter, which uses rainwater collected further up the building to help control the climate of the atrium.
This was one of the sustainability features that helped the building become the first Manhattan office block to be awarded gold certification under the US Green Building Council’s Leadership in Energy and Environmental Design (LEED) programme.

It also travels around some of the upper floors, visiting the offices of O, The Oprah Magazine and Popular Mechanics, as well as Good Housekeeping’s Research Institute, where thousands of recipes are developed and tested each year.

“Technologically the building was, in terms of elevators, the most advanced of its kind. So when you step out of the elevator door, every level they’re different worlds,” says Foster.
“Good Housekeeping is completely different, they’re testing products, generating heat, smells, vapours. Normally you could never think of putting that in an office tower.”
The post Norman Foster narrates drone tour of New York’s Hearst skyscraper appeared first on Dezeen.