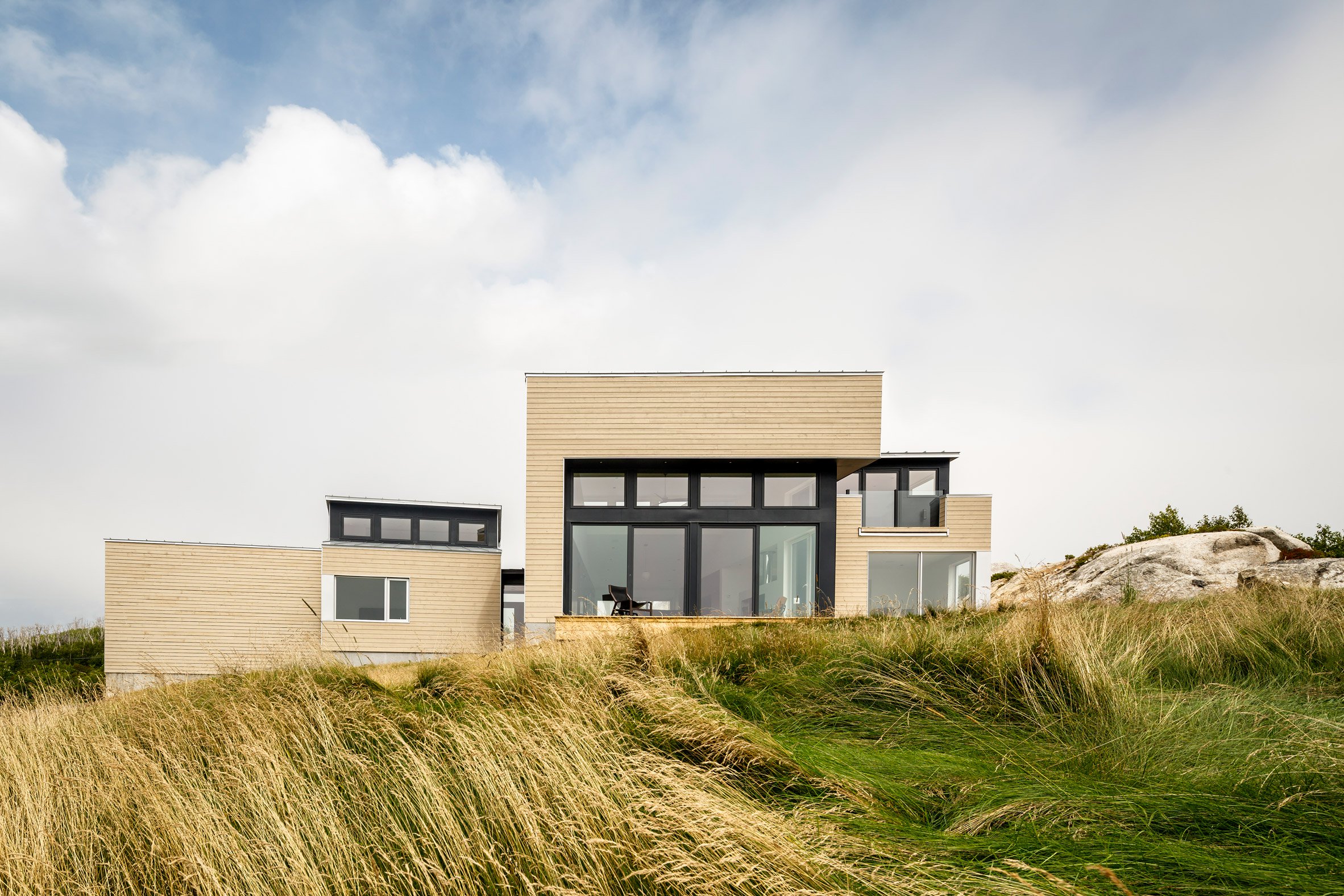 Boulders strewn across the landscape informed the disjointed massing of this house in Nova Scotia, which architect Omar Gandhi designed to look like local sheds.

The home’s location in Purcell’s Cove, just south of Halifax, is scattered with large outcrops and giant rocks left behind by an ancient glacier. It is named Float, after the “loose pieces of rock that are not connected to an outcrop”.

This geology informed the shape of the building, which comprises a series of sections with different heights.

“The formal massing of the home is one which was derived to evoke a larger bedrock volume (outcrop) but one which has become severed, shifted and has relocated slightly over time,” said the team at Omar Gandhi Architect, which has offices in Halifax and Toronto.

Placed high up on a bluff that is often shrouded in fog, the property overlooks lakes, mountain bike trails and the ocean to the south on a clear day. Designed for a university researcher with two grown-up children, it comprises a row of four trapezoidal blocks that alternate in orientation.

Each is designed to evoke the small wooden buildings typical of the area, with grey-washed timber cladding arranged in horizontal bands to reference the layers of rock formations.

Roofs are tilted to open the spaces up towards the sweeping vistas, with large windows surrounded by black steel panels also strategically placed for the same reason.

“The architectural language is drawn from traditional shed outbuildings, adapted to maximise view, interior natural light and a hierarchy of spaces,” said the studio.

Residents enter through a wood-lined slither of space that cuts the home in two. To the east, a pair of volumes contain an open-plan kitchen and lounge, and a dining room, office and laundry space.

Behind these areas, a tall outcrop creates a sheltered outdoor space and can be seen through the windows positioned to remind occupants of their surroundings. Bedrooms are housed in the western portion, with a garage attached to the end.

Interiors are intended to be “severe”, with concrete floors, white walls and dark grey tones to match the landscape. Walnut and coloured lacquer accents provide touches of warmth.

Omar Gandhi Architect founded his studio in Halifax in 2010, and has since completed a variety of residential and commercial projects in and around the city. These include hilltop house made up of stacked black cuboids, a minimal fashion boutique, and a remote cabin on Cape Breton.

Photography is by Doublespace Photography. Drone photograph is by Omar Gandhi.