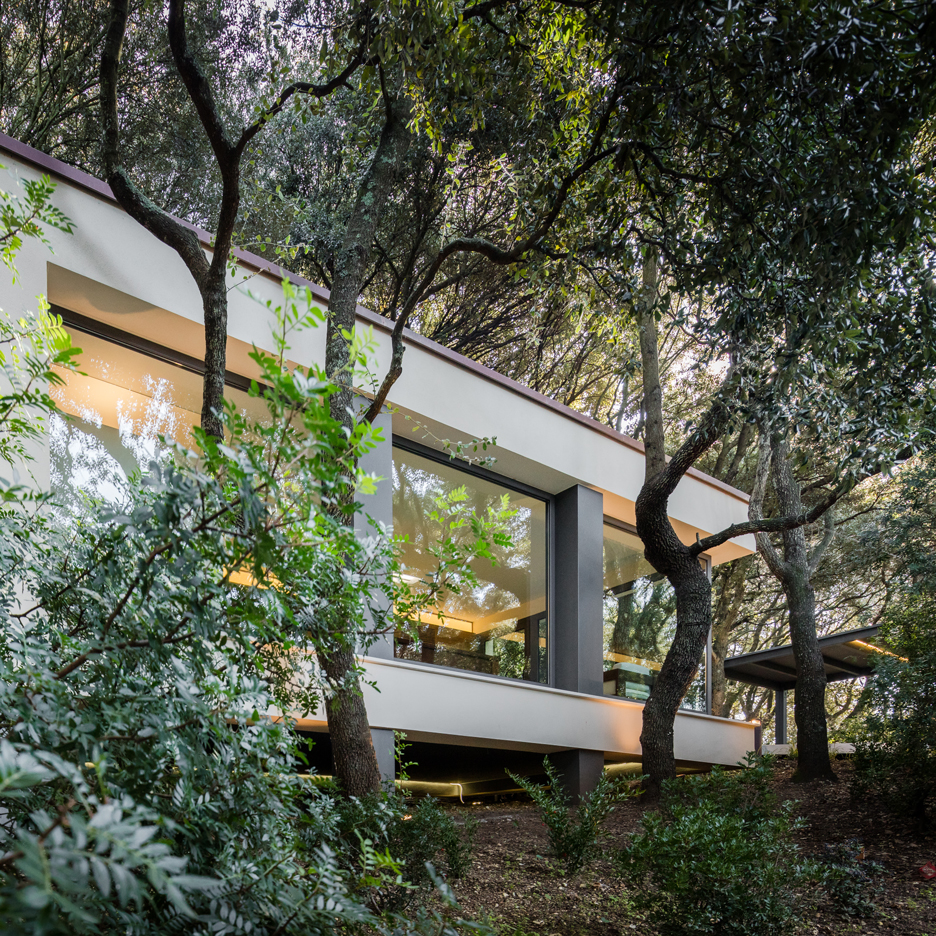 Towering oak trees surround this addition to a family residence in Sardinia, which is raised up on concrete feet to minimise its impact on the wild landscape (+ slideshow).

Officina29 Architetti designed the small building as an annex to a house in Sassari, the second-largest city on the Italian island.

It can function as an extra living space, a games room, or as a bedroom suite for overnight guests.

Named Casa nel Bosco, or House in the Woods, the structure slots in amongst the surrounding oak trees – none were felled during construction.

The architects also chose to raise the structure off the sloping ground, allowing smaller plants to continue to grow underneath.

“The strong, powerful presence of oak trees and the sloping terrain imposed a design that blurs the boundary between building and landscape,” said Officina29 in a project statement.

“The house fits perfectly into the oak forest, a striking setting where the majestic trees surround and touch the building with its branches,” they added.

“Each natural element has been respected and not even one tree has been cut down to make room.”

A wooden pathway connects the building with the main house.

Rather than sloping to follow the angle of the terrain, the route is broken up into stepped levels that zigzag across the ground to avoid touching trees. In one place this wasn’t possible, so an opening was made to create room for a slender trunk.

The building’s entrance forms part of a stretch of floor-to-ceiling glazing that wraps around two walls, offering generous views of the surrounding woodland from inside.

Smaller windows puncture the two rear elevations, and all four walls are rendered white to help the structure stand out.

“The building is characterised by limited dimensions and height, almost to highlight by contrast the grandeur of the surrounding trees,” said the architects, who have an office in Sassari.

“The openings are large and contemporary, and the glass walls reflect wonderfully the surrounding context, making it literally part of the interior,” they added.

Inside, the open floor plan is loosely divided into two by a bathroom unit, which has corridors on both sides.

The largest half provides a generous living space with room for a dining table or for playing pool, while the more smaller half can be used as a bedroom or as a more private living space.

Storage is built into one of the walls, and also provides a kitchen area.

“[The building] offers a new perspective to those who want to live in outer space, and becomes a place of rest and reflection, immersed in the tranquility of the forest-garden,” added the team.

House in the Woods was completed in 2014.

Other recently unveiled garden annexes include a micro studio in the backyard of an architect’s Brooklyn home and a smoking pavilion in the newly sculpted garden of a Zurich house.

Photography is by Joao Morgado.