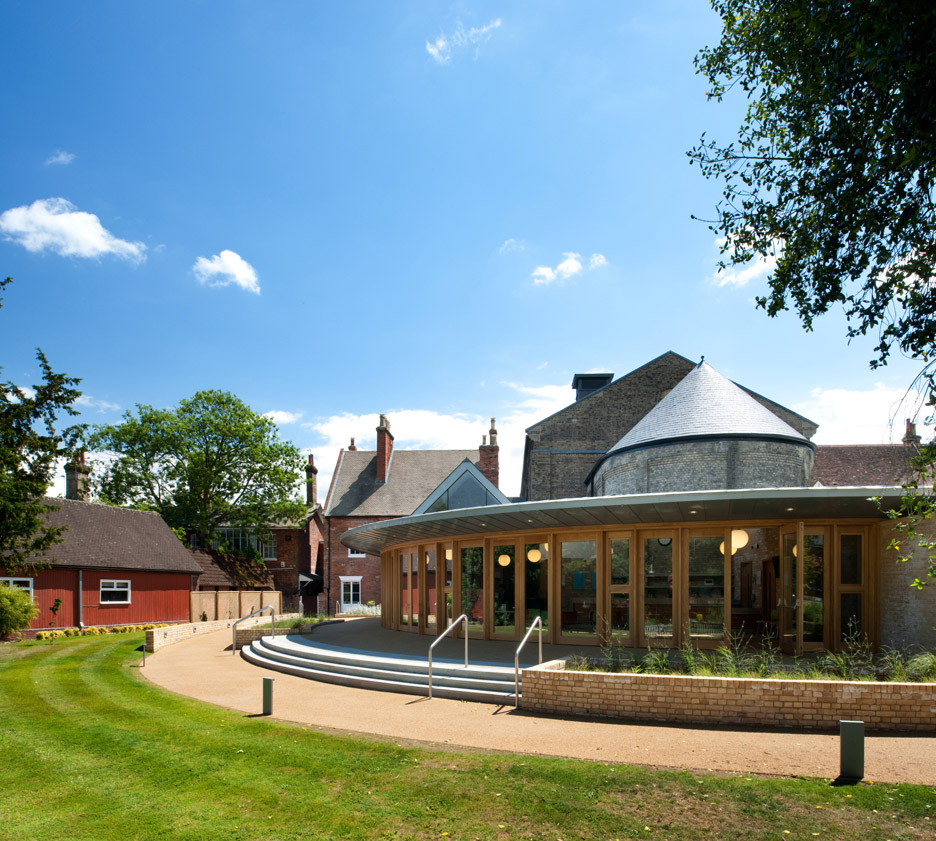 Foster Wilson Architects has converted a heritage-listed church in Bedford, England, into a theatre with a new curved timber and glass foyer bar (+ slideshow).

The Quarry Theatre at St Luke’s occupies a previously redundant Moravian church and minister’s house, which both back onto Bedford School.

Foster Wilson Architects oversaw the refurbishment of the old structures, and designed an extension that opens to the building up to the original church garden.

The church was consecrated in 1865 but finally closed in 2008. The project’s aim was to transform the historic structure into a facility that could be used by the school, touring theatre groups, or members of the community.

The church faces one of the town’s key thoroughfares, so it was retained as the main frontage for the theatre.

Related story: Military church in Antwerp reinvented as a restaurant by Piet Boon

“The building’s location was ideal, with its main facade facing the town and the back facing the school grounds,” architect Tim Foster told Dezeen. “This allows the theatre to face both ways, both physically and metaphorically.”

“The church is retained as a single public assembly space, which is much more appropriate than chopping it up to create residential units, which might otherwise have been its fate,” he added.

A foyer and teaching room lead through to the new 300-seat auditorium.

Located within the central area of the chapel, the hall was created by erecting a steel structure inside the existing walls so the original volume and features remain visible.

A flat-floored stage surrounded by tiered seating is overlooked by the church’s existing balcony, which the architects extended forward and re-tiered to improve sight lines to the stage.

Two levels of new galleries extend along either side of the auditorium, above which a rig for suspending scenery and stage lighting is positioned.

“We wanted to respect and work with the grain of the original building while adapting it to its new use,” Foster explained. “Wherever possible, original spaces have been restored by removing later additions that confused the clarity of the original plan.”

The extension at the rear of the building wraps around the outside of the curved chancel, where the original exterior brick wall is left exposed and complemented by new fair-faced brick walls.

An additional foyer and bar are contained in the extension, which is flanked by a wall of glass. The space opens out to a terrace that connects the building with the gardens and the school beyond.

“By radiating the new foyer around the original apsidal chancel wall and keeping the roof low, we were able to allow the original building to remain visible above it,” said the architect.

“The curved glazed wall provides a panoramic view of the gardens, filling the space between the original vestry and the new backstage accommodation,” he added. “The new addition is clearly contemporary but aims to work with the original building in terms of its form and materials.”

A former minister’s house adjoining the church was adapted to contain front-of-house facilities including a booking office and a foyer in the former vestry. Its upper levels accommodate offices and a studio.

The architects endeavoured to retain and repair existing materials wherever possible, employing lime plaster in the original buildings. Oak flooring and joinery create a sense of continuity throughout the interior.

Other examples of churches converted for cultural purposes include a stone building in a Franciscan convent that now houses an auditorium and a cultural centre featuring pivoting golden cabinets that occupies a Dutch church dating back to the 13th century.

Photography is by Philip Vile.