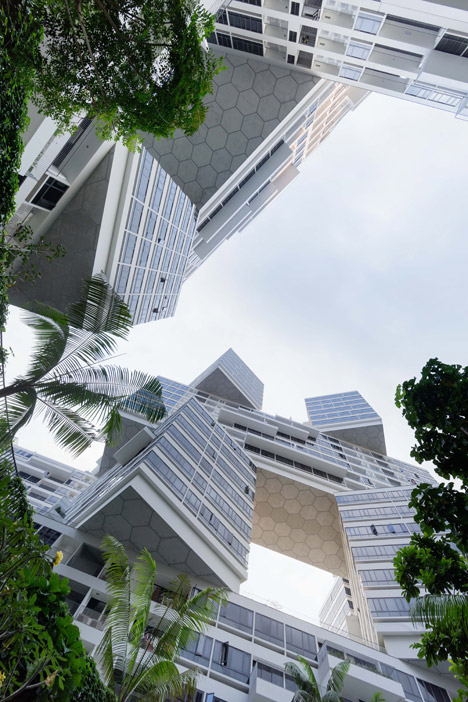 World Architecture Festival 2014: architect Ole Scheeren has revealed more about the motivations behind The Interlace, an “important prototype” for housing where horizontal buildings are stacked diagonally across one another to frame terraces, gardens and plazas (+ slideshow).

Speaking to Dezeen at the World Architecture Festival in Singapore last week, Scheeren described the 170,000-square-metre complex as a “vertical village”.

Conceived as the antithesis to tower blocks, The Interlace is made up of 31 apartment buildings that have been arranged and stacked in a honeycomb arrangement to frame eight large hexagonal courtyards.

“What I think is significant and radical about The Interlace is that it is a blatant reversal of a typology,” Scheeren told Dezeen in an interview at the World Architecture Festival last week.

Related story: Ole Scheeren: Asia has “a certain fearlessness and vision for the future”

“Housing – through the quantities that it has been produced in, and the formulaic nature it has taken out of an almost lethal mix of building regulations, efficiency and profit concerns – has become simply compressed into a very standardised format. I think this project shows in a really dramatic way, and also in a significant scale, that something else is possible.”

Scheeren led the project while working at Rem Koolhaas’ OMA, although he now runs his own studio, Buro Ole Scheeren.

The development, which was handed over to residents at the end of 2013, accommodates 1,040 apartments of varying sizes. The six-storey blocks are stacked up in twos, threes and fours, creating three peaks of 24 storeys.

Parts of the blocks rest over others, but several also cantilever outwards to shelter spaces below.  This offers residents elevated gardens and roof terraces, both private and communal.

The large multi-storey voids between blocks also help to bring light and ventilation right through the site, as opposed to the isolated environments created by clusters of isolated towers.

Comparing the building to the radical housing developments of the 1960s, Scheeren said the project helps to foster communities: “I guess in the 1960s there were a number of really good ambitions and really powerful ideas but maybe what was missing was a sensitive-enough understanding of the humane, of structures for inhabitation.”

“They were incredible structures and I’m really interested in using this structural dimension, but to really imbue it with a very acute sense of place, of space, of inhabitation of people who actually live and work and exist in those places,” he said.

The eight large courtyards, which have names such as Theatre Plaza, Lotus Pond and Rainforest Spa, offer a variety of amenities, from swimming pools and gyms to barbecue areas, tennis courts, games rooms, and even a one-kilometre running track that surrounds the site.

These squares form the main entrances for residents and connect up with a network of secondary footpaths that lead through to each home.

A car park is sunken down on a ventilated basement level, but lit from above by openings in the surfaces of the courtyards.

The post Ole Scheeren’s The Interlace envisioned as
“a blatant reversal” of tower-block housing appeared first on Dezeen.