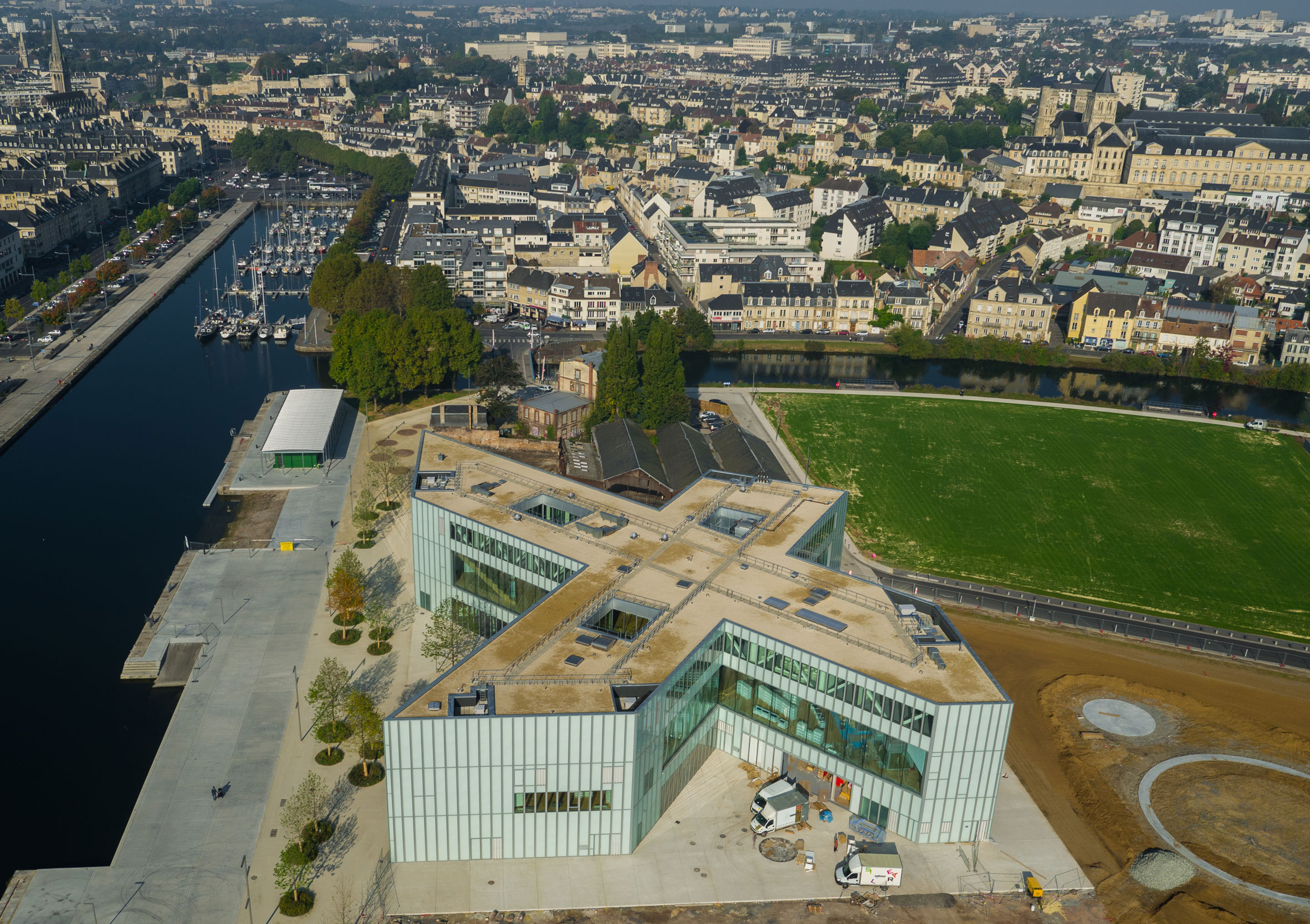 OMA and Barcode Architects have unveiled their completed Bibliothèque Alexis de Tocqueville – a library with a dramatic X-shaped plan in Caen, France.

The 12,500-square-metre multimedia library is set on the Presqu’île de Caen, a peninsula that extends out from the city in France’s Normandy region towards the English Channel.

“The cross-shaped building marks this central location between the old city and the new, and is a symbol for an institution deeply invested in the future of Caen,” said OMA partner Chris van Duijn.

“The library pivots from the historical centre to the new urban masterplan, stretching from city to sea.”

Each of its four wings fan out in the direction of city landmarks: the Abbaye-aux-Dames to the north, the Abbaye-aux-Hommes in the west, the central train station to the south and an area of redevelopment in the east.

“The design of the Bibliothèque Alexis de Tocqueville is characterised by a cross-shaped floorplan responding to the library’s urban context, with each of the four protruding planes pointing to a landmark in Caen,” said OMA.

Each of the four column-free wings host print and digital media relating to a different theme: human sciences, science and technology, literature, and the arts. A large reading room is set at their intersection.

Reading rooms feature panoramic windows that stretch from floor to ceiling, offering generous views out across the city.

The glazed facade is made from load-bearing glass panels, meaning columns could be omitted from the interior.

Stepped and curved seating areas provide an alternative to desk study spaces, which are dotted throughout the space.

The 120,000-strong document collection is displayed on a combination of free-standing and built-in white bookcases.

The underside of escalators linking the three floors are covered with reflective panels, which mirror the reading rooms.

OMA and its founder Rem Koolhaas ranked at number 12 on the inaugural Dezeen Hot List – a guide to the most newsworthy players in the architecture and design industry.

The firm is currently working on another library in Qatar and an arts centre in northern England.

It has just completed a trio of buildings for a new cultural district in Miami Beach and was also involved in creating the new home for London’s Design Museum.

At the end of last year Barcode Architects revealed its collaboration with BIG on an Amsterdam tower, which will terrace down to touch the surface of the IJ lake.

Photography is by Philippe Ruault.