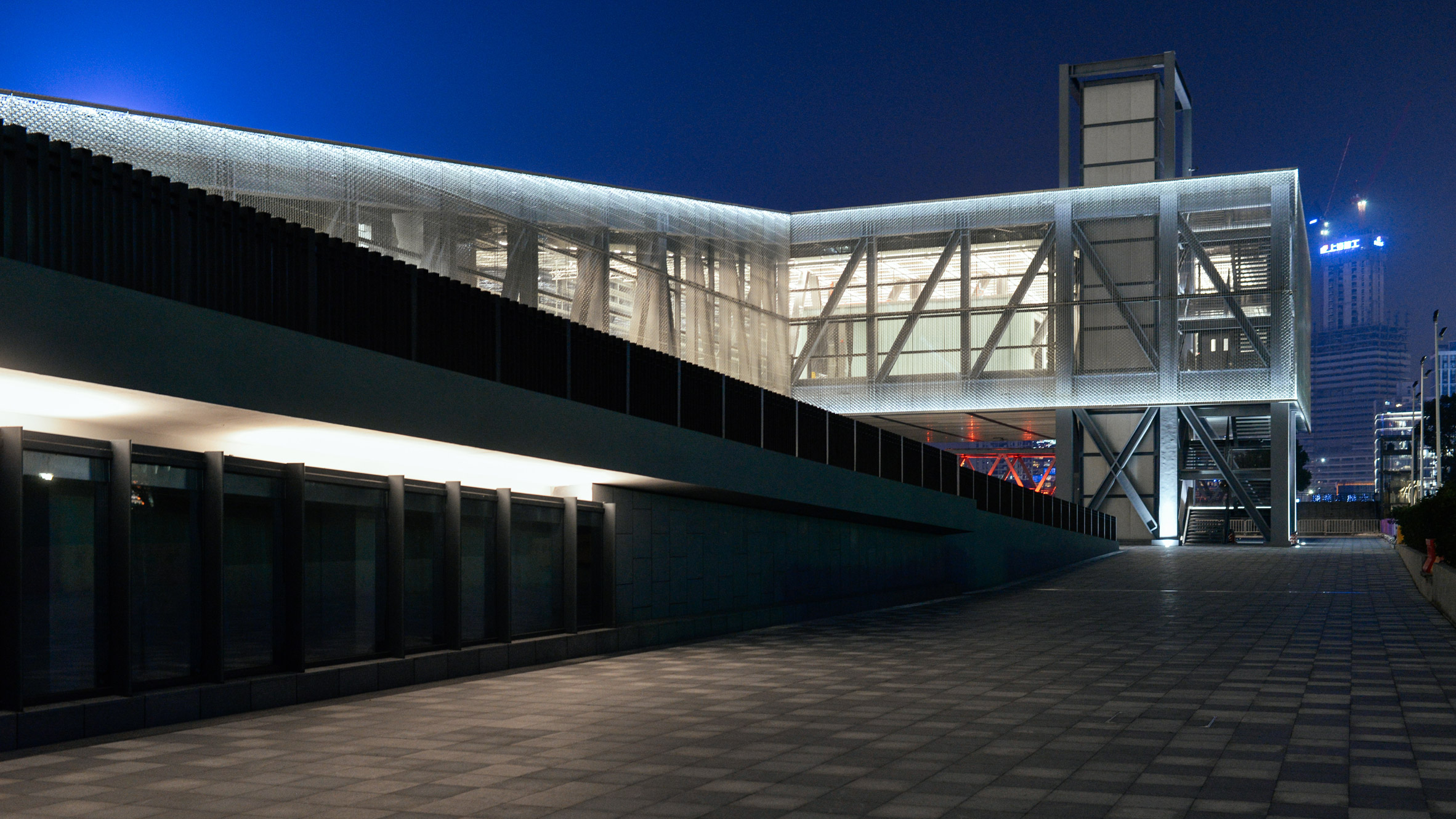 OMA has completed an events centre on a former shipyard in Shanghai, which features a mesh facade and an exposed steel structure intended to reference the hulls of boats once built there.

Located on the edge of the Huangpu River, the 1,500-square-metre centre occupies a site known as the Shanghai Shipyard after its former use as a place for boat building.

The Rotterdam-based firm, who won a competition to design the exhibition centre in 2014, chose an industrial style for the building to echo the unfinished ship hulls that once populated the site.

The building is set on the ramp of a former ship’s cradle – a structure used to hold a boat upright on dry land for building and repairs. Half of the slope is left exposed to create a large outdoor theatre.

A narrow volume extends from the other side of the long ramp and lifts off the ground to form an elevated events space that covers a plaza below.

“The new volume transforms the existing ramp into a large-scale theatrical space for events, while the covered plaza under the elevated box can be used for more intimate happenings,” explained the studio.

“The building’s materiality and architecture establish a dialogue with the site’s industrial past; a mysterious object wrapped in a metallic mesh exposes its steel structure.”

A structural steel tower provides support in one corner of the cantilevered structure. On the side facing the waterfront large expanses are left free of the mesh covering to offer unobstructed views from the main exhibition space inside.

Part of the staircase that provides access to this events room splits into larger steps that can be used as seats for resting or watching performances.

Inside, the exposed steelwork and large windows are complemented by grey interiors as a continuation of the pared-back aesthetic.

The project was led by David Giannoten and Michael Kokora, from OMA’s Asian offices. Along with Rotterdam, Beijing and Hong Kong, the international firm – which ranked at number 12 on the Dezeen Hot List – also has offices in Brisbane, New York, Doha and Dubai.

Last year, OMA founder Rem Koolhaas told Dezeen that his studio;s projects in China had previously been hit by the political backlash against “weird architecture”, but denied that its huge CCTV building in Beijing had been the catalyst for Chinese president Xi Jinping’s attack on bizarre buildings in the country.