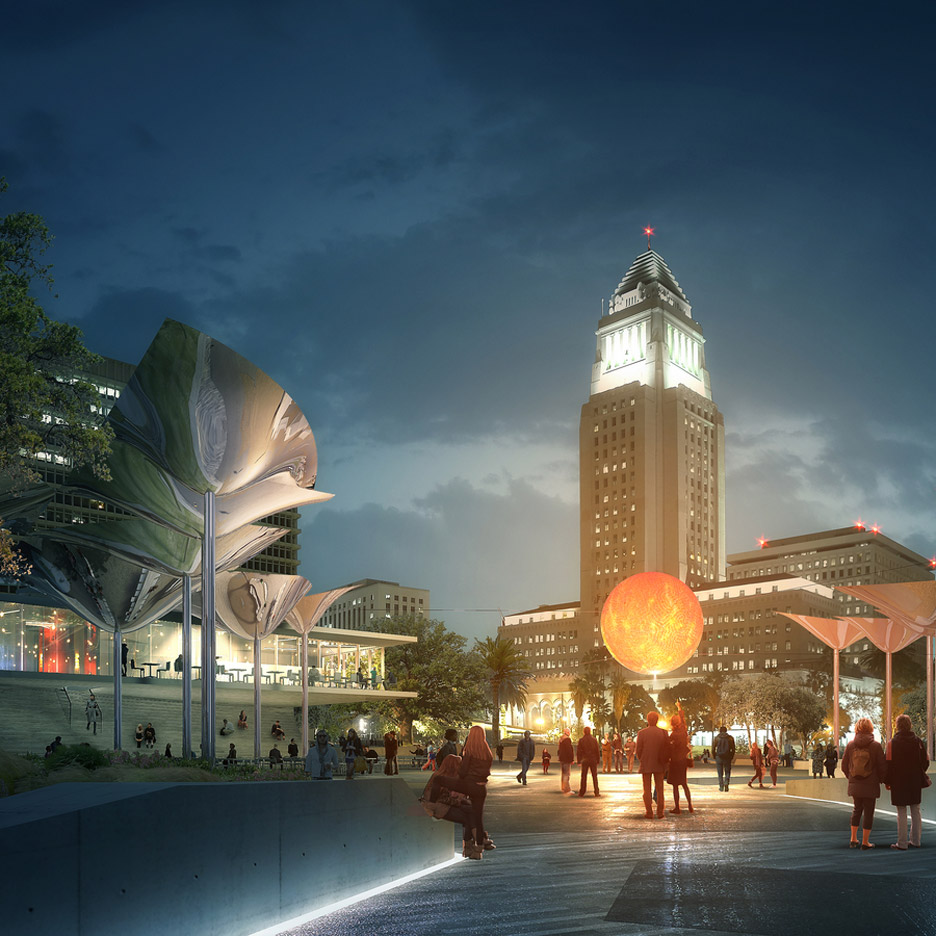 Architecture firm OMA is one of four firms shortlisted to design the FAB Civic Center Park in Los Angeles, with a proposal that includes mirrored canopies and shaded bleacher seating under a cantilevered cafe (+ slideshow).

The competition to create a public park at Downtown LA’s First Street and Broadway (FAB) intersection is down to teams led by architecture firms  OMA, Eric Owen Moss, AECOM and Brooks + Scarpa. A winner is due to be chosen later this month.

Related story: LA has become “the hottest destination” in America for international architects

Their aim is to visually and physically connect the cultural corridor of First Street – where Frank Gehry’s Walt Disney Concert Hall and Diller Scofidio + Renfro’s Broad Museum are located – to the front steps of City Hall.

“The proposal for the FAB Civic Center Park introduces a new type of park space,” said OMA, “a respite for Downtown LA that celebrates the city’s diversity as its greatest asset and promotes civic engagement through highly versatile spaces to experience art, enjoy food and revel in the unique urban setting.”

The team’s design includes a central plaza, which can be reached by several pathways and is surrounded by oak and sycamore trees native to Southern California.

To one side of the open space, a two-storey cafe building features glazed walls, a green roof and a viewing balcony.

A corner of the building’s lower floor is cut away, replaced by stepped wooden bleacher-style seats shaded by the storey above.

Open to the plaza, the seating forms an amphitheatre for performances as well as an access route to the indoor dining area.

“OMA’s design for the park’s restaurant is sculpted to create a diverse set of protected outdoor spaces, a main dining area with a vista over the park and an edible roof garden that reflects the park’s playful landscape,” said the studio, which was founded in 1975 by architect Rem Koolhaas in Rotterdam and now also has offices in the US, Middle East and Asia.

AECOM’s proposal features a central green space with latticed wooden shelters around the outside and a small faceted structure in one corner.

The design by Brooks + Scarpa Architects comprises turfed ribbons that emerge from the ground to slope over a glazed structure.

The strips of landscaping continue diagonally across the park as paving, planted beds and water features.

Finally, Eric Owen Moss Architects has designed an undulating grassy landscape with steps built into the mounds and grids of columns scattered across.

A white fabric arch forms the main entrance to the park, while indoor facilities would be located underneath the miniature hills.

Another four teams, including Morphosis and James Corner Field Operations, have been shortlisted to redesign Pershing Square – one of LA’s oldest public parks, which is located just a few blocks south-west of FAB.

These projects are part of a wave of developments for LA that have been unveiled or started over the past few months. Among them are Gwyneth Paltrow’s branch of the private Arts Club on Hollywood’s Sunset Strip, and a huge bridge to replace the iconic Art-Deco Sixth Street Viaduct.