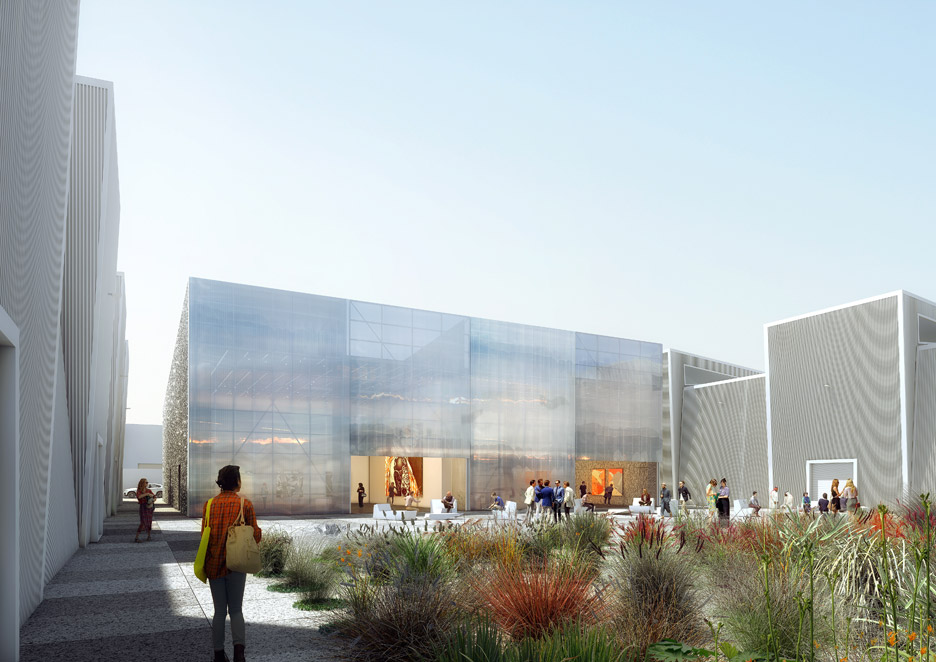 Dutch architecture firm OMA is to transform a set of four warehouses on Dubai‘s Alserkal Avenue into a multi-purpose venue for cultural events.

The new space, which is expected to open later this year, will be OMA‘s first ever built project in Dubai.

The project aims to provide the Alserkal Avenue area with a location to host large-scale public events, art exhibitions, performances and conferences.

The building’s entrance will feature full-height transparent sliding doors, echoing the firm’s design for the Garage Museum of Contemporary Art in Moscow, completed last year. OMA is also using a huge sliding door for The Factory theatre and Arts venue in Glasgow, Scotland.

The rest of the existing exterior shell of the Alserkal Avenue project will be wrapped with a spray-on concrete.

Inside, four eight-metre-high moveable walls will rotate and slide to allow for different configurations depending on the type of event.

OMA were brought on board to design the space in order to provide the area with a “home” for cultural events and to encourage more creative talent to gravitate towards the avenue.

“We selected OMA to design our new project space because they share our commitment to bold ideas and experimentation,” said Abdelmonem Bin Eisa Alserkal, Founder of Alserkal Avenue.

“Their design provides us with a new home for arts and culture programming, and enables us to take even greater risks as we look towards the future,” he added.

Alserkal Avenue is located in the Al Quoz neighbourhood, which is becoming one of the region’s foremost arts and culture districts.

Since the avenue was established in 2007, it has become home to a community of contemporary art galleries and alternative art spaces, as well as design, media and industrial studios.

“We are witnessing growing demand from the international art scene within the regional arts landscape,” said director of Alserkal Avenue Vilma Jurkute. “Alserkal Avenue has always pushed the potential for the art scene; the space will offer a new opportunity to facilitate a closer dialogue between east and west while strengthening the infrastructure for the arts locally.”

The United Arab Emirates city is currently undergoing a wave of development following its recovery from the 2008 financial crisis, and in the space of three years has started two annual trade fairs, opened a dedicated design district and hosted its inaugural design week.

Cyril Zammit, director of design for Art Dubai – the organisation that has spearheaded the series of new design fairs and festivals in the city – has ambitious plans to make the design week bigger than its equivalent in London by the time Dubai hosts the 2020 Expo, less than five years away.

“Dubai Design Week is a response to an increasing presence and role of design in the city, as part of a wider cultural development,” said Zammit.

OMA is the latest in a string of leading architects to design a building in Dubai, with others including Zaha Hadid, Jean Nouvel, and UNStudio.

The firm is also working on a new department store that will occupy a converted Venice palazzo, and is transforming a 19th-century structure in Paris into a gallery and art studio for department store Galeries Lafayette.