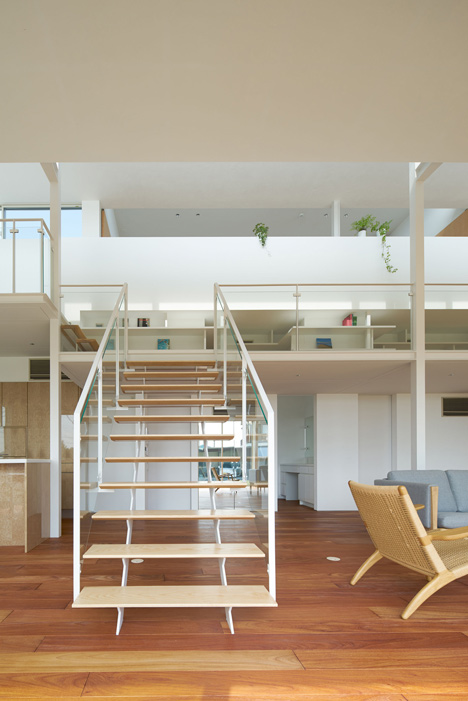 MAMM Design has completed a two-storey residence in Kai, Japan, featuring a long mezzanine described as a street where the family can come together (+ slideshow).

The Tokyo studio designed House in Kai for a young family. The aim was to create an open-plan interior with views between different spaces, allowing the parents to keep an eye on their two small children.

Living and dining spaces take up most of the ground floor. The mezzanine gallery spans the room, leading up to bedrooms on the uppermost floor.

“Our aim was not to separate the house into only a living room and bedrooms, we also wanted to create an intermediate space where members of the family could enjoy alone time whilst still feeling the rest of the family’s presence,” explained studio co-founders Akira and Maya Mada, whose past projects include an apartment with curved walls and a home with a sunken kitchen.

“The gallery plays a role as a street where all activities of the family flow in,” said the architects.

Although it would have been easy to gain planning permission for a three-storey house, MAMM Design chose to stay in keeping with the vernacular of the surrounding area and keep to a height of just two storeys.

“Considering the clients wanted quite a lot of rooms, it would have been easy to simply build a three-storey house, however we felt that this was a little excessive considering the majority of the buildings within the area are two-storey homes,” the architects told Dezeen.

“And we think this is not a good solution, since it will weaken relations between family members, as they will occupy separate floors,” they added.

The client’s main request was that all rooms be south-orientated in order to take full advantage of the natural sunlight. The open-plan layout helps achieve this, and glazing was also added along the full length of the garden-facing south wall.

As well as the living spaces, the ground floor accommodates a children’s playroom, bathrooms and storage under the mezzanine, which was kept as thin as possible to maximise the ceiling height.

Stairs located between the living room and dining area lead up to the mezzanine gallery, which also features zigzagging shelves intended to be used as small dens by the children.

The two bedrooms sit on the top level, alongside a hobby room and a roof terrace.

MAMM chose 100-millimetre-thick steel columns for the house’s framework. Solid timber flooring was added throughout the property and birch wood was used for all built-in furniture.

“We stuck to keeping the dimension of all columns within the house equal to the size of columns found within traditional timber houses,” said Mada. “We chose these materials because they are natural; we prefer not to use artificial materials within our projects.”

Underfloor heating was also installed throughout the property to allow residents to cope with the harsh winters in Kai, which is located within the Kofu basin of central Japan.

Photography is by Daici Ano.