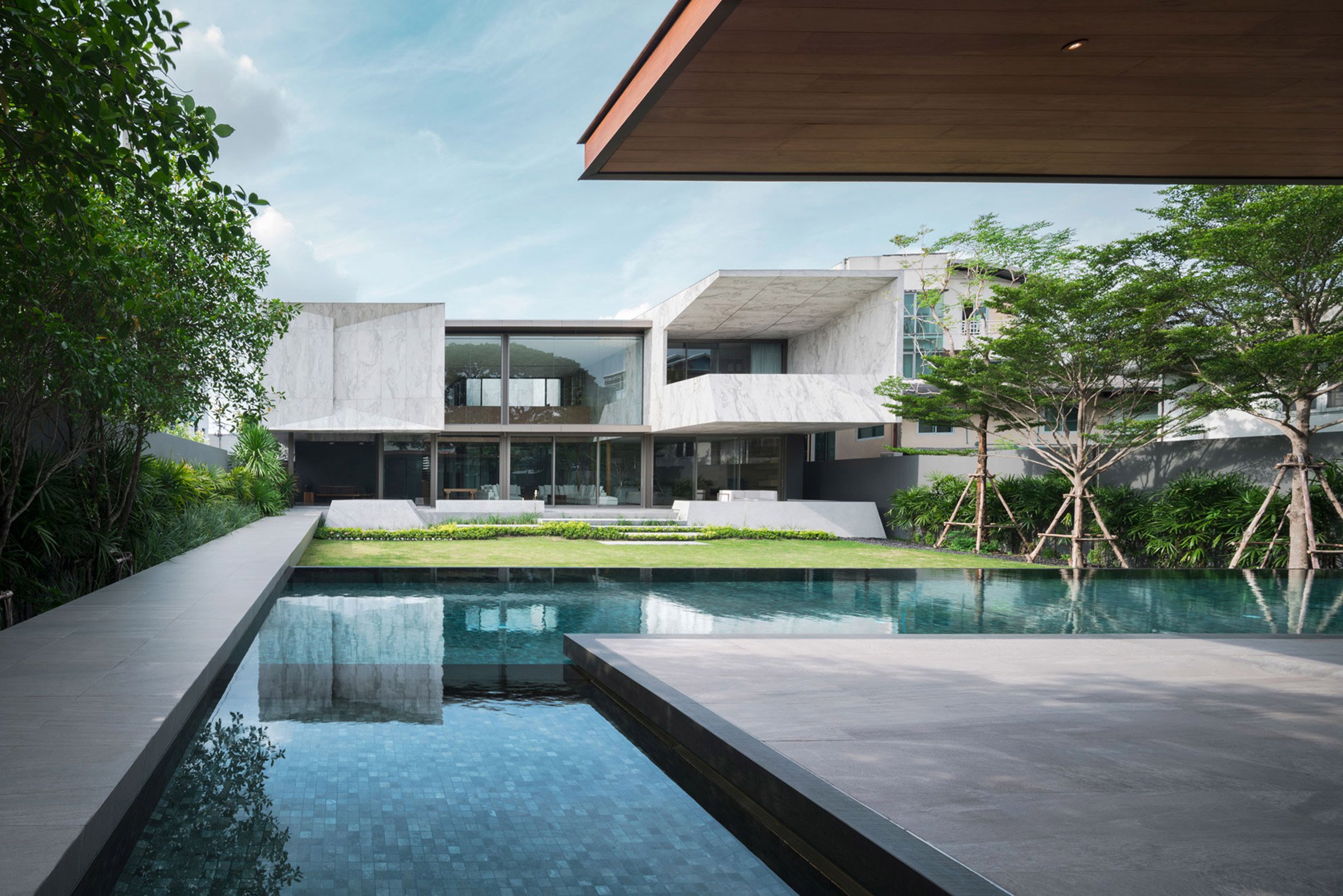 Wedge-shaped chunks are carved out of the marble-clad volume of this house in Bangkok, Thailand, which was designed by local studio Openbox Architects.

Openbox Architects chose white marble panels to clad the upper brick structure of the building, to gives the appearance of a solid volume. It also offers weather protection to prevent overheating in Bangkok’s hot summer months.

Appropriately called Marble House, the residence is articulated by a series of openings, including the large indent at the front. Windows are tucked behind the angular fins to face the back garden.

At the rear the volume extends as two blocks – one is denoted by two walls that fold over, while the other has a balcony with a sloped roof.

“The initial idea is to allow inhabitant’s behaviour to carve a dwelling space into a monolithic piece of marble sculpture,” the architects said.

“The concept of tilting of windows towards more open corner of surroundings… contributes to the form of the house.”

Other features include three internal courtyards cut into the block. Each one is accessed by one of the bedrooms on the upper level, offering the residents views of “private skies”.

The marble volume is raised above glass walls that open the main living spaces on the ground floor of the house to back garden, with steps leading outside to an L-shaped swimming pool.

A courtyard slotted in the centre ensure that plenty of daylight is brought inside. It is planted with a tree and accessed from the lounge through large glazed doors.

Inside the residence, the upper walls are lined with marble panels, while the lower walls are made up of dark cladding and windows framed with wood.

The treads of the wooden staircase cantilever from the wall, letting light flow through the gaps between. They lead up to a mezzanine hallway placed above the dining room and featuring a balustrade lines with light wooden panels.

In the garden, a swimming pool wraps a guesthouse at the other end of the plot. It features glass walls like the main property and a huge overhanging roof that covers a decked sunbathing area.

Other residences in Bangkok include a home designed by Jun Sekino that features brick grates set into the walls to hide a series of outdoor spaces.

Photography is by Wison Tungthunya.