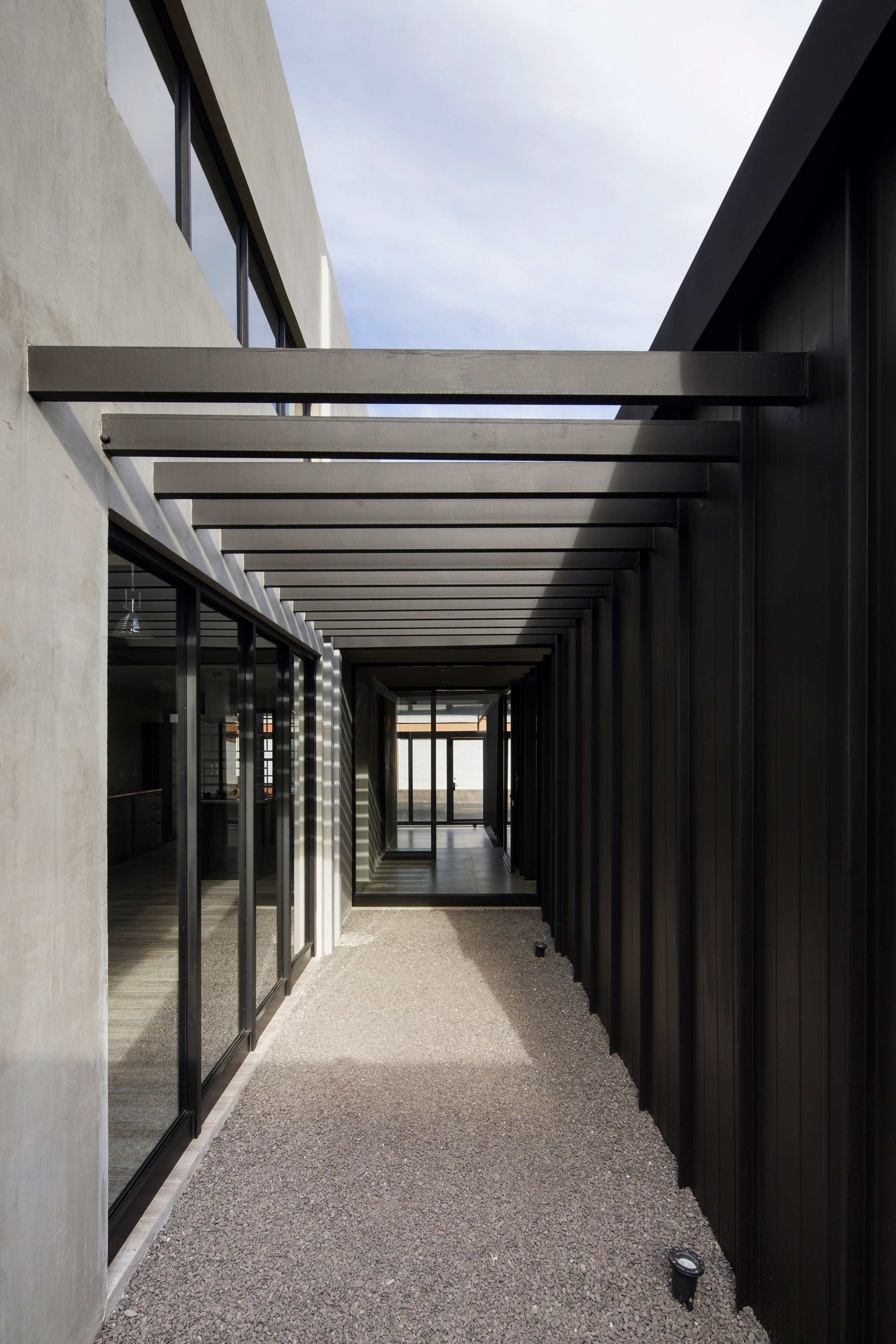 Two volumes, one made from zinc and one from concrete, are separated by a glazed walkway and terrace in this Costa Rican house by MG Design Studio.

The San Jose-based architects split the two sections of the house – each with inward-sloping, mono-pitched roofs – into social and private areas. One contains an open-plan kitchen, living and dining room, while the other zinc unit houses the bedrooms, bathrooms and laundry rooms.

The two main structures of the 143-metre-square (1539-square-feet) building are divided by a central open-air terrace, which provides a “contemplative space” for the residents of the Tres Ríos home.

A glazed passageway joins the two buildings of Casa Ching, with steel beams forming a partially covered terrace area between the two rectangular blocks. The palette is made up of mostly black, concrete greys and white-painted walls.

MG Design Studio paid particular attention to the movement of light within the property. Overhanging structures – like the steel beams that form a semi-covered roof across one end of the central terrace, and the grid-like white window frames at the end of the concrete unit – cast linear patterns of light across the concrete walls.

“[We] used the route of the sun to create shadows and change the spaces according to the hours of the day and the use of spaces,” said the architects. “Light becomes one of the main elements, behaving like a texture that generates changing atmospheres.”

The concrete volume is made up of varying heights, with a mezzanine level housing a studio and a photography darkroom. Downstairs, the long, black steel kitchen island is situated at one end of the long open space.

The two levels of the concrete unit are connected by a staircase, formed by a continuous piece of steel that has been embedded into the wall.

In the zinc section of the house, bedrooms with windows at each end of the building are separated by en-suite bathrooms and a laundry room to increase privacy within the home.

“The stones used in the gardens are the only mineral elements chosen, also with a grey tone to maintain the sobriety of the whole.”

Outside, steps down from the glazed passageway level out onto a tiled patio area, which also doubles as a car-parking space and is sealed off by an electric gate for security.

Extensive glazing has been applied in other recent Costa Rican homes, including Estancia y Ficus by Cañas Arquitectos, which provides vistas of the verdant landscape of the city of San Jose below, and also a concrete residence by Carazo Arquitectura that sprawls across the a hill and steps down the slope into a canopy of vegetation in Heredia.

Five of the best houses in Costa Rica on Dezeen

Photography is by Andres Garcia Lachner.