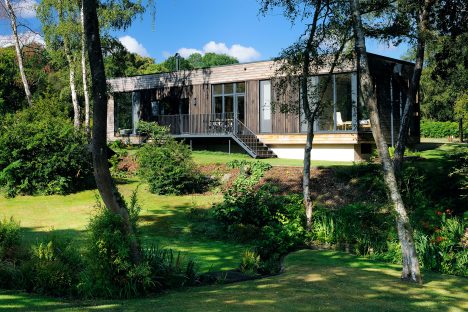 This chestnut-clad home by Pad Studio was prefabricated offsite before being craned into a clearing in the New Forest, a stretch of protected woodland in the English county of Hampshire (+ slideshow).

The clients had been living in a static caravan on the five-acre site for 15 years, but approached the local practice to upgrade their home.

The result is a modest, timber-clad cabin named Forest Lodge, which still technically qualifies as a caravan.

“A key requirement of their brief was to create a new, very low-energy dwelling, flooded with light and with a strong connection to the surrounding landscape,” said managing director Wendy Perring.

“Importantly, the new dwelling should not resemble or feel like a mobile home.”

The site came with stringent planning controls due to the New Forest’s national park status. These regulations aim to prevent damage to the site’s 200 square miles of grassland, woodland and heath – which provide a habitat for its famous pony colony.

The building had to adhere to the Caravan Act 1968, restricting its length to 20 metres and its width to less than seven metres.

The structure was prefabricated at a workshop in Yorkshire and craned into position in two separate parts. This means it can also be removed in the same way at a later date.

The structure is largely clad in horizontal planks of untreated chestnut, but vertical sections of cladding made from dark-stained sweet chestnut add variety to the facade.

It sits in a clearing among mature trees and is accessed via a long gravel track. One end of the rectilinear block is propped on a limestone platform to level off the site’s gradual slope.

“The trees’ verticality and the texture of their bark are echoed in a variety of timber treatments used on the homes cladding,” Perring explained.

The western facade of the house is almost completely glazed to maximise views out into the forest. From here the occupants can access a raised terrace and the landscaped garden beyond.

“These large apertures focus and frame the stunning views, displaying them internally as if paintings on large canvases,” continued Perring.

Inside, a restrained colour and material pallet of pale oak, limestone and white panelling is intended to put emphasis on the views.

“This deliberately muted array of materials provides a backdrop which is painted by the forest’s changing light and rendered by the colour of the landscape beyond the building,” said the architect.

“Bespoke joinery, thoughtful details and connection with the landscape give this home a feeling of solidity, serenity and permanence; far removed from the client’s previous home.”

A single bedroom is placed alongside an en suite at one end of the space. A conjoined lounge, dining area and kitchen occupy the remaining two-thirds of the plan.

The house is designed to meet the low-energy requirements of a Passivhaus. Roof-mounted solar panels, an air source heat pump and on-site sewage treatment facilities mean the house is largely self-sufficient.

Rainwater is also collected in underground tanks and used to water the new landscaping created by the studio to help the house settle into its woodland surroundings.

Photography is by Nigel Rigden.