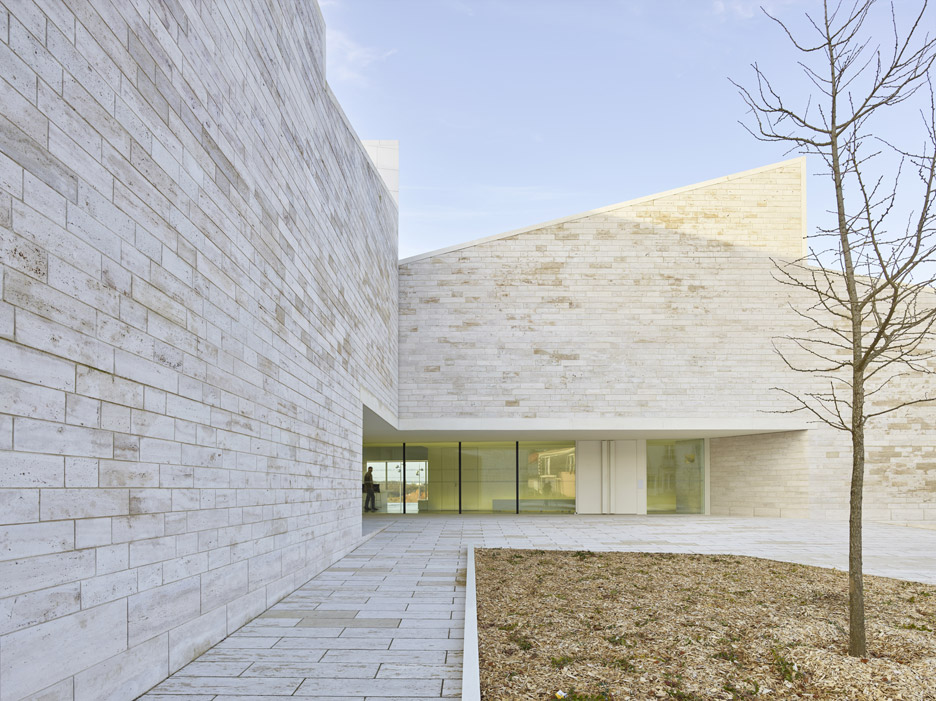 Named Cour et Jardin, the building is located in Vertou, a suburb to the south of the city. It contains a theatre, recording studios and numerous practice rooms for music and dance.

To reduce the visual scale of the structure, Atelier Fernandez & Serres divided it into a series of more domestic-sized volumes. These are topped by mono-pitched roofs that angle in different directions, just like the surrounding houses.

“The additions and extensions of Vertou’s houses have created a lot of rooftop divisions,” architect Stephane Fernandez told Dezeen. “One of the aims of our project was to refer to these sloping and multifaceted surfaces.”

To further reference the setting, white travertine – a type of limestone typically sourced from Italy – was chosen for the walls, matching the walls of the local church.

“The building talks about the city shapes of Vertou, its downtown, its church and its large landscape,” added the architect. “It aims to put it at the centre of reflection, framing the territory and its integration.”

The building is organised over two storeys, one set slightly below ground level and one that sits just above. This made it possible to create ramped entrances on both floors, with one on the north side and the other on the south.

At the southern entrance, the form of the building frames a courtyard with a simple tree planted at its centre.

“Everything starts with a walk, a stroll in the city centre of Vertou with steepness and prospects,” said Fernandez. “The project is an extension of this geography, a manmade geography.”

The pale tones of the building’s exterior are continued through the interior, which features concrete floors and white-painted walls. Although some wooden flooring is included in the studios.

The nature of the building’s use dictated few windows, but those that have been added are kept as simple as possible, with no prominent frames. Artificial lighting comes in the form of illuminated strips in the floors and ceilings.

Atelier Fernandez & Serres is a studio based in Aix-en-Provence. Past projects include a student housing block with a latticed facade inspired by anemone tentacles.

Photography is by Stephane Chalmeau.