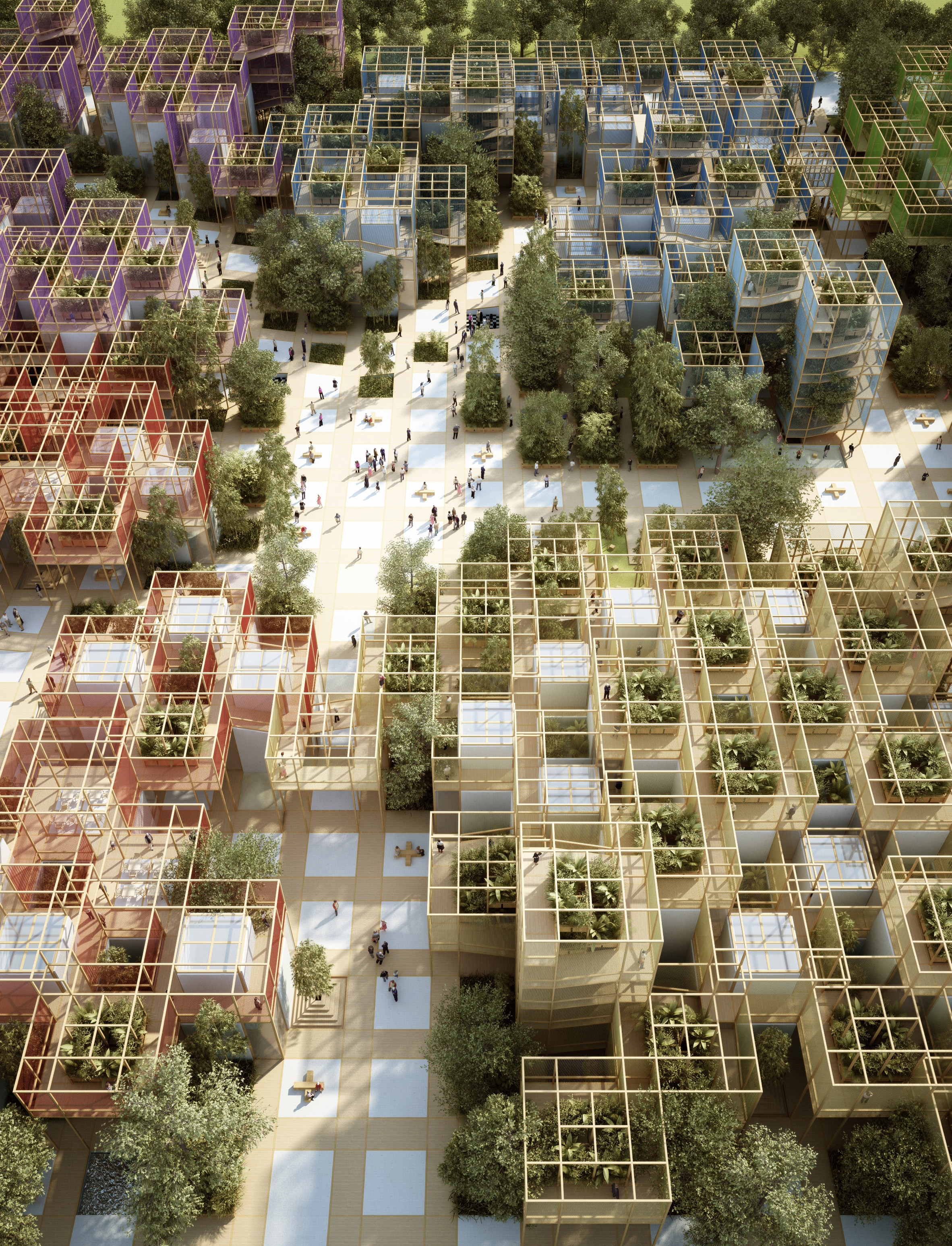 Penda architects Chris Precht and Dayong Sun plan to build on their experience with modular construction to create the exhibition space for Chinese property developer Vanke.

Their aim is to create an alternative to the traditional expo pavilion – typically an iconic piece of architecture, where visitors often have to queue to get inside. They instead want both the insides and outsides of their structure to be an exhibit.

“The pavilion was designed as a network of small scale units,” said Precht. “It was a core feature to avoid a large, iconic structure that covers a majority of the land. Rather, we wanted to create a village-like typology that can be explored by the visitors.”

Called Thousand Yards, the structure will have a plaza at its centre, feeding a number of wide and narrow pathways. These will lead through to areas including a greenhouse, a food court, teahouses, a vegetable garden and the exhibition galleries.

But visitors will be able to choose their own path, making their own discoveries as they go along. They will encounter ping-pong tables, children’s playgrounds and themed gardens dotted around the space.

They will also be given packets of seeds as they enter, and encouraged to plant them into the gaps in the roof of the timber structures.

“In most expo pavilions, the paths are guided and that makes their exhibitions boring,” said Precht.

“We believe that architecture and its spaces need to be explored by the visitors – the hunt to make a unique discovery, like when you find a little cafe hidden in an alley of a city,” he continued.

“Those surprising connections create a special and personal bond to a place, and we believe that architecture needs to make space for those possibilities.”

Penda expects the structure to live on past the exhibition. Its eight- by eight-metre modular configuration is based on an ancient Chinese measuring system, called Li, and is designed to be flexible enough to accommodate a number of future uses.

The framework will be built from cross-laminated timber – a type of engineered wood that is becoming increasingly popular as a greener alternative to concrete and steel, but with similar strength.

“All parts of the pavilion will be standardised and can be prefabricated in a factory before being delivered to site,” added Sun.

Penda ranked at number 77 in the inaugural Dezeen Hot List – a guide to the most newsworthy players in the design industry. The studio is based in both Vienna and Beijing, and is perhaps best known for its ambitious designs for bamboo cities.

The studio was chosen to design the Vanke exhibition space after winning an invited competition.

The Chinese developer is known for regular commissioning respected architects. Past collaborations include an art centre with Kengo Kuma, Steven Holl’s “horizontal skyscraper” in Shenzhen and Daniel Libeskind’s “handcrafted dragon” at the Milan Expo.