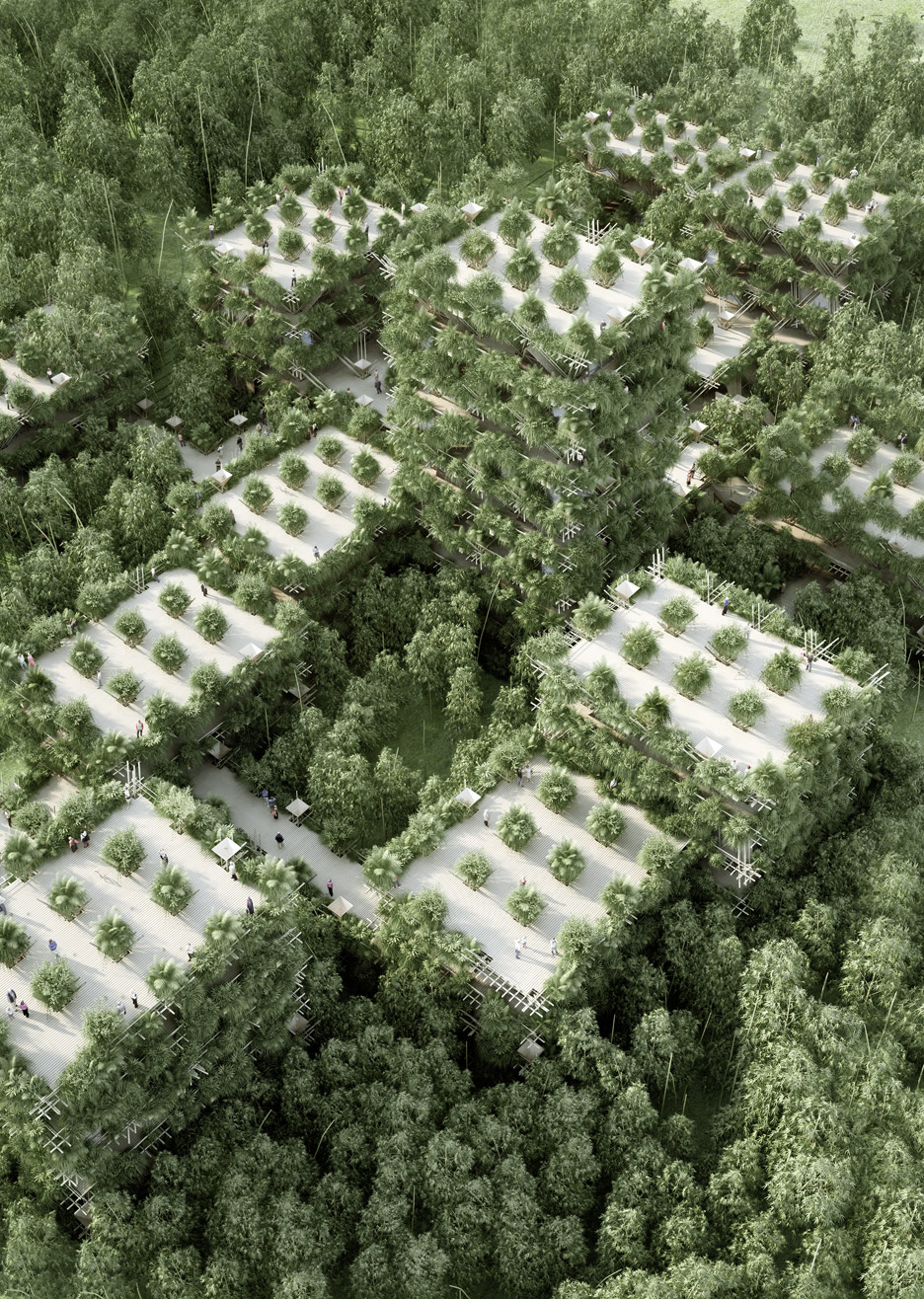 Architecture studio Penda has unveiled new CGI renderings detailing its vision for a city of 200,000 people that would be creating using an innovative modular bamboo structure.

Penda, a Beijing- and Vienna-based studio, believes its design for structures built from interlocking horizontal and vertical bamboo rods could be used to sustainably build the infrastructure of an entire city by 2023.

“ We believe that in present times a sustainable way of construction is more valuable than ever,” explained architects and studio co-founders Dayong Sun and Chris Precht, who have been using bamboo since their first project – a garden gatehouse in China.

“The current state of irresponsible city planning, air-pollution and economic crisis asks the architecture profession to rethink the process of building,” they said. “The use of natural materials like bamboo, connected to a smart modular system, gives a structure freedom to grow in every direction.”

Penda first developed the bamboo framework in 2014, after working on a concept for a flexible modular hotel. It involves connecting bamboo rods with X-shaped joints of the same material, then using lengths of rope to offer additional strength.

The studio later realised that the system could be expanded and used to create much larger constructions – from emergency housing to new urban centres, and unveiled their first prototype during Beijing Design Week last month. It is called Rising Canes.

The architects envision the components of the system being produced in China’s Anji County – one of the largest bamboo export regions in the world. Here, a new community could be established at the heart of a bamboo plantation.

“The system can grow to a habitat for 20 families within the first nine months,” said Sun and Precht. “As the number of inhabitants keeps growing, the structure gets extended to accommodate multiple communal spaces, bridges and even floating structures.”

“By 2023 the bamboo development is extended to an urban configuration, inhabited by a population of 20,000 people and surrounded by a bamboo grove of 250 acres,” they added.

Related story: Leading architects are “turning the focus back on bamboo”

One of the main advantages of the system is that it becomes more stable as more joints are added. This means multi-level structures could be easily created.

Structures can also be easily disassembled with minimum wastage, as components can be reused several times.

“With this patient and natural expansion, the project describes a true ecological approach of growth, which leaves no harm on the surrounding environment nor on the building material itself and is therefore a counter-movement to a conventional way of the present construction process,” added the architects.

Sun and Precht founded Penda in 2013. Since then the pair has also designed a concept for a customisable high-rise facade and a doughnut-shaped house based on the form of a tree stump.