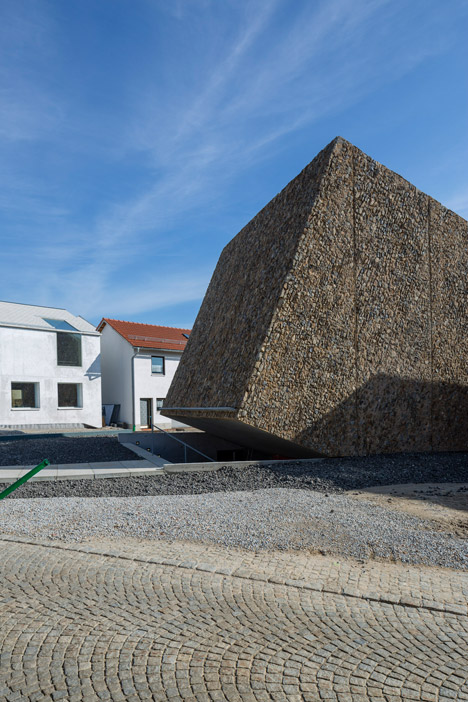 One end of this stone-clad concert hall in Germany by Peter Haimerl Architektur appears to have subsided into the ground, causing the other to lift up in to the air (+ slideshow).

Munich-based Peter Haimerl Architektur designed the 500-square-metre venue for the small village of Bailbach, in the Bavarian woods.

The concert hall is one of three projects by the German firm to revitalise the village centre, including a new city hall, which opened in 2012, and the renovation of the oldest house in the area as an artist’s guesthouse set for completion in 2015.

The tilted angle of the stone-clad concrete volume creates the slope of the auditorium seating area, while a submerged foyer with a bar creates a socialising area for concert-goers, with access provided by a set of steps.

“The concert hall represents the heart of the urban development to revitalise the new centre of Blaibach,” said Haimerl.

“[It] is a solitaire of concrete with an inclination above the slope in the village centre, following the topography.”

A flight of concrete steps leads visitors through a hole in the ground into a cavity beneath the granite hood, where an underground lobby wraps around the rectilinear auditorium.

“The monolithic tilted building opens itself to the visitors at the new village square and guides them by a staircase to the foyer below the surface,” said the architect.

This faceted timber-lined corridor includes cloakrooms, toilets and a bar.

The heavily textured stone cladding of the exterior contrasts with the smooth concrete and timber walls that line the interior spaces and auditorium.

In the auditorium, slivers of artificial light stream through gaps between layers of untreated concrete that make up the walls.

These “lively” textured surfaces are designed to help dampen sound, with bass absorbers located beneath the slits and under the steps to achieve optimal acoustics for the space.

“The dominant tilted surfaces of the concert hall are based on acoustic specifications,” said the architect.

Rows of metal-framed seats tone in with the grey concrete space. They sit on a series of slim metal platforms that project out of the sloping floor.

“The seemingly transparent seats, which are fixed on iron swords, appear to float above the light slits,” added Haimerl.

Photography is by Edward Beierle.