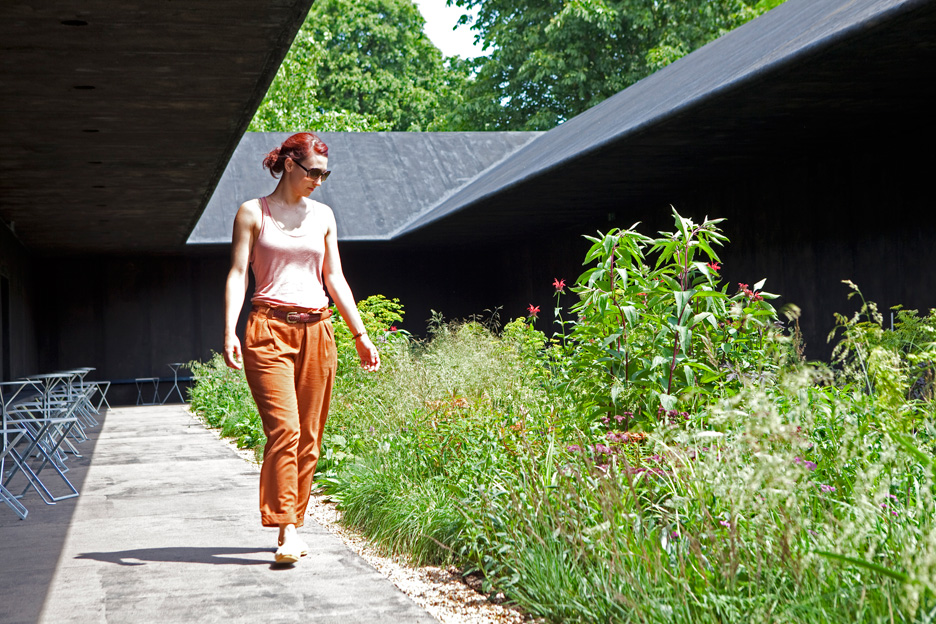 Movie: gallery director Julia Peyton-Jones reflects on the walled garden Peter Zumthor created in 2011 in the next movie of our exclusive video series looking back at the Serpentine Gallery Pavilions.

“Peter Zumthor designed an extraordinary interior space,” Serpentine Gallery director Peyton-Jones says in the movie. “He had been thinking for some time about this whole notion of the hortus conclusus – the enclosed garden.”

Zumthor’s pavilion consisted of a timber structure covered in gauze and painted black, which visitors could enter via three openings on each of the longer sides.

“It was very dramatic to get into, because it was so foreboding,” Peyton-Jones recalls.

“It was a tough call, because it was so austere [from the outside]. It looked sort of like chain mail.”

On entering the pavilion, visitors were channeled through a dark, narrow corridor around the perimeter of the structure, before emerging into the garden at the centre.

“You went on a walk around the structure until you came to an opening,” Peyton-Jones says. “Then there was this amazing garden that was open to the sky.”

The inner garden was surrounded by a long bench, protected by a canopy that projected inwards from the walls.

Unlike previous pavilions, which contained auditoriums for talks and performances, Peyton-Jones says Zumthor wanted his pavilion to be a place of quiet reflection.

“Peter was very keen that if we did any speeches – including for the opening – there should be no microphones, it should just be about the experience of being there,” she says.

“It was a space of solitude and calm. And also a place where you could look at this garden that Piet had created and see bees and butterflies,” she said.

“It’s incredibly unusual to be in a space that makes you concentrate on these things, because of your proximity to them,” added Peyton-Jones. “You could go into this space and you could sit there quietly and just reflect.”

The post Peter Zumthor’s Serpentine Gallery Pavilion 2011 was a space of “solitude and calm” appeared first on Dezeen.