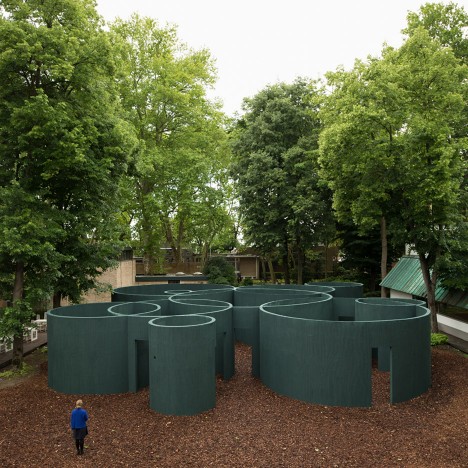 Venice Architecture Biennale 2016: Chilean architects Mauricio Pezo and Sofia von Ellrichshausen have built a maze-like pavilion in the Venice Giardini, made up of 10 overlapping cylinders (+ slideshow).

Constructed for this year’s Venice Architecture Biennale, the Vara Pavilion comprises 10 teal-coloured volumes that are all different sizes. Each touches or overlaps at least one other, creating a complex network of enclosed open-air spaces.

The two Pezo von Ellrichshausen founders described the result as “series of exteriors within other exteriors”, intended to provide a sensory experience for its visitors.

“It’s simultaneously very conceptual and intellectual, and at the same time its sensual and physical,” Mauricio Pezo told Dezeen during a tour of the building, which opened to the public at the weekend.

“You try to make sense out of the things you see, but at the same time you are feeling and smelling, having an experience you cannot avoid,” he explained.

The pavilion forms a continuation of the duo’s conceptual Infinite Motive project, which imagined a megastructure of 100 overlapping circular enclosures.

Here, the size of each cylinder is different. According to Pezo, the unit for each radius is a reference to the varying dimensions of a vara – a notoriously imprecise rod used as a measuring tool to trace out cities during the colonial migration to America.

“This rod was used by the Spaniards to conquer America, but it was so abstract and unprecise,” he explained.

“It varied from 64 to 94 centimetres, so when you count a block in some cities it is 90 metres, while some others are 120 metres.”

All the surfaces of the steel-framed structure are coated in plaster, with striped markings from the tools used to apply it, and are painted in a rich shade of teal.

But Pezo insisted that the materials were incidental. He said that, even though the building was calculated to a strict geometry, it was designed to be experienced rather than described.

“Our position is that architecture doesn’t need any explanation,” he said.

“We’re confused by so much data these days – social, political and economical problems – that we’re forgetting the real experience of architecture, of that connection between nature, time and our own bodies,” he continued.

“The intellectual construction of a building is a layer of information that is actually not really necessary for your own experience.”

Their projects include the strictly gridded Casa Meri and the symmetrical Casa Pezo. They also designed their own house and studio, which is a seven-storey tower with rough concrete walls and a complex layout.

The Vara Pavilion is situated in amongst the national pavilions that make up the Giardini – one of the two main venues of the Venice Biennale. It will remain on show until 27 November 2016.

Other exhibitions on show in the Giardini include a boat-inspired installation, a swimming pool and an inhabitable cloud-like structure.

Photography is by the architects.