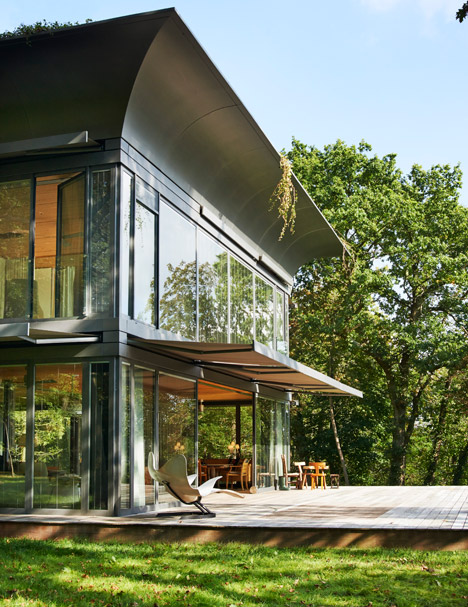 Philippe Starck has unveiled a prototype for his latest series of prefabricated low-energy wooden homes – a glazed and aluminium-clad structure outside Paris that he and his wife Jasmine plan to move into (+ slideshow).

The Montfort residence is the model for the French designer’s second series of made-to-order houses produced in partnership with Riko, one of the leading European manufacturers of prefabricated wooden buildings.

Named PATH, which stands for Prefabricated Accessible Technological Homes, the collection is made up of four different types of residence – with a total of 34 different floor plans – all designed to consume a third of the energy of a traditional house.

“With PATH, we wanted to reach out to the largest possible public,” said Starck, who has also recently launched a customisable furniture brand and a smartphone-controlled thermostat.

“This is the reason why I decided not to make any architectural gesture here. I didn’t want to impose anything to anyone. The architectural possibilities are very broad and flexible.”

The designer’s completed two-storey house produces 50 per cent more energy than it consumes, largely thanks to an assortment of “eco-technology systems” concealed behind the fluted parapet that lines the edge of roof.

“The Montfort features a cornice. But other kinds of roofs are also available, single or double-pitched,”  he said.

“The cornice-roof achieves a large number of benefits for customers. In fact, over and above the architectural tour de force, the cornice is intended to hide the whole energy producing system, which is a real factory.”

Customers can choose how many of these systems they want to add, from photovoltaic solar panels and wind turbines to rainwater harvesting systems, heat pumps, and more.

“We have integrated the most advanced engineering knowledge and the state-of-the art prefabrication technology to create a contemporary living solution that is economically accessible to all who appreciate the symbiosis of ecology and aesthetics,” said Riko CEO Janez Škrabec.

The Montfort residence features a largely glazed exterior with rows of aluminium panelling running in between, although the offsite-manufactured homes can be ordered with wooden facades, or as a combination of the two.

Sizes range from between 140 and 350 square metres, with either one level or two. The number of rooms varies between one and eight, from a small garden studio up to a generous family home.

Stark’s home is shown furnished with a selection of furniture and lighting pieces that he has designed over the course of his career.

Interior walls are lined with spruce panelling, a material that creates little waste during manufacturing.

The PATH homes will be available to order this month, costing between 2,500 and 4,500 euros per square metre, depending on the specification. The company claims that each will be delivered within six months and can be assembled in two weeks.

Starck and Riko’s first collection of homes, named DEARS, were launched at the end of 2012. The first prototype was built in Versailles.

The post Philippe Starck’s new home is the prototype
for a new prefab housing collection appeared first on Dezeen.