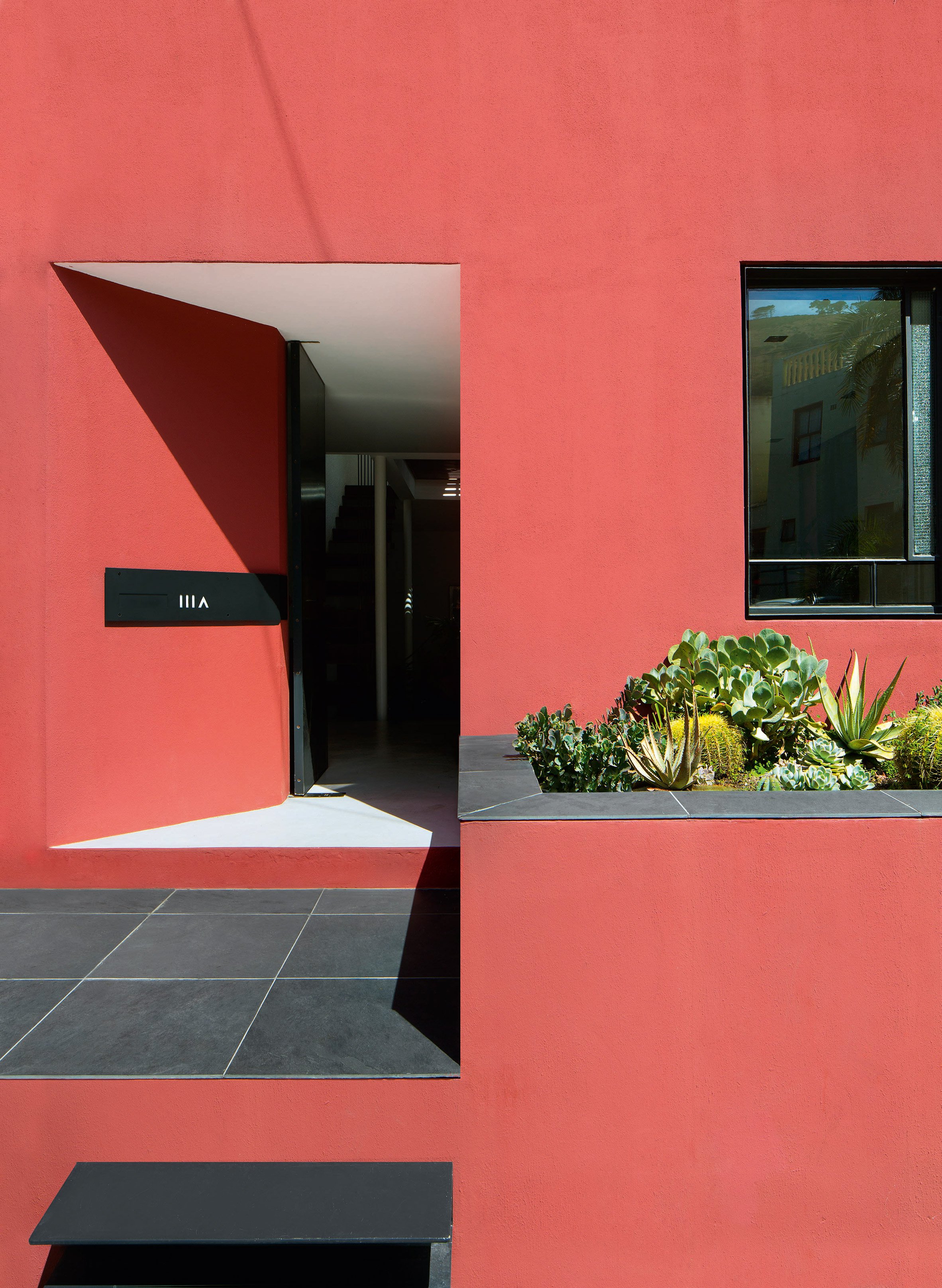 A rooftop swimming pool offers views over Cape Town from this house, which was designed by local studio Fold Architects with pink-painted walls to offset a verdant vertical garden.

House IIIA is located on in Cape Town’s Bo-Kaap, a historical area that was once the city’s Islamic quarter and situated on a slope above the city centre.

A decked roof terrace makes the most of these views to the city, as well as Table Mountain and Signal Hill, and includes the narrow plunge pool and a dining area shaded by a slatted canopy.

Fold Architects wanted to make use of the narrow passage alongside the semi-detached house. Large expanses of glazing are placed on this side of the house to bring in natural light, while the wall opposite is covered in a variety plants.

Inside, this two-storey vertical garden can be seen from most areas in the house. It provides the focal point of the terrace slotted between the two bedrooms on the first floor and runs along alongside the open-plan kitchen, living and dining room on the ground floor.

The architects said the building poorly imitated Bo-Kaaps’s traditional building style, which straddles the turn of the 19th century and features a mix of decorative Dutch and British influences.

“The house had no redeeming features at all – a pastiche if anything of the typical Bo-Kaap typology with Cape Dutch and Georgian decorative elements, loosely and often incorrectly applied,” principal architect Chris van Niekerk told Dezeen.

Rather than mimicking tradition, the architects wanted to create a contemporary alternative that also respected the sensitive location, recently named a Grade 1 National Conservation Area.

“We rebuilt in in a contemporaneous way in sympathy with the neighbours, but not emulating past mistakes,” said van Niekerk.

At the entrance, the house includes a Bo-Kaap Stoep – the elevated front porch traditionally used for socialising – fitted with a large planter.

The brightly coloured rendered-brick exterior fits in with the area’s famously rainbow-coloured houses. Although not a traditional element, it is one that has become widespread as the location has increased in popularity with tourists.

The reddish-pink colour, which van Niekerk says reminds him of the work of legendary Mexican architect Luis Barragán, was selected to complement the blue and purple facades of neighbouring homes. It also offsets the house’s green wall.

“This particular shade of red with pink undertones was chosen in an attempt to work within this extreme context, but also because it is warm and inviting, works well with all the green from the garden,” he said.

“There is something in its use that reminds me of the work of Barragán – rich and textured.”

The architects chose simple materials for the interior to cater to the client’s tight budget. A custom-made staircase connecting all three levels features suspended steps made of bent steel and a slatted balustrade. It is topped by a skylight that opens onto the roof terrace, helping to bring light down to the lower floor.

In the kitchen, an exposed concrete island is topped with a steel counter. Darker finishes feature upstairs, where blackened Siberian larch covers the floors and the bedroom walls are painted black.

“The materials used internally are all honest and applied economically,” said van Niekerk. “The house was to be constructed quite cheaply, so we worked with raw, unpainted steel, exposed concrete, textured white render along the stairway wall and pigmented screed floors.”

The neutral tones also allow resident Craig Raeside to re-decorate the spaces with furniture from his store. At the moment, the house features lights by Tom Dixon and furniture by Magis.

Other projects in Cape Town, a port city on South Africa’s southwest coast, include a tree house-like residence in the forest, a Japanese-style home and a concrete pavilion that offers outdoor dining to a villa.

Photography is by Adam Letch and Michael le Grange.