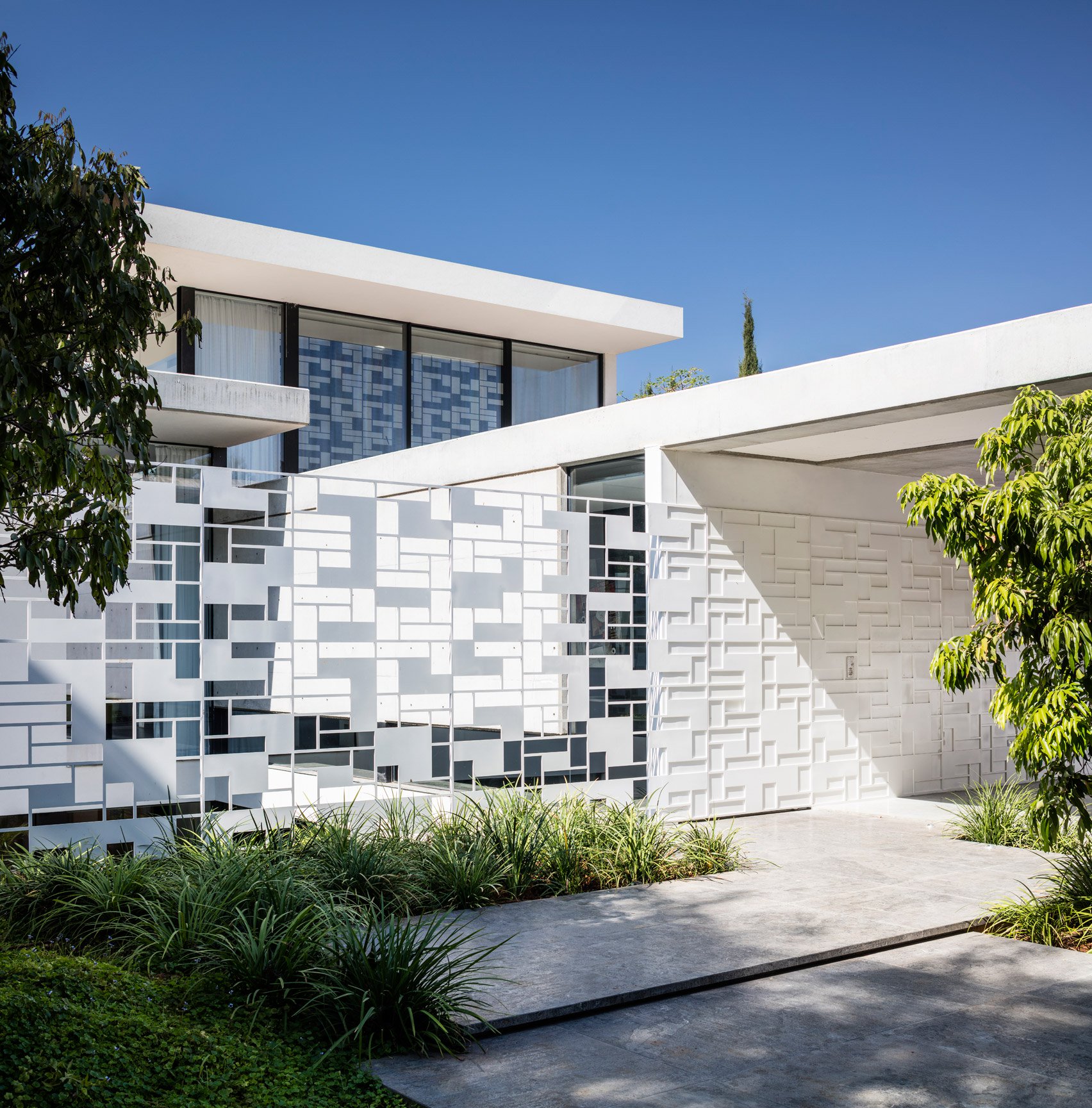 Screens with a perforated geometric pattern help to control the flow of light, air and views throughout this house in a suburb of Tel Aviv by Israeli architect Pitsou Kedem.

AB House covers 770 square metres of a 1,800-square-metre plot in the Kfar Shmaryahu neighbourhood to the north of the Israeli city.

The house comprises two interconnected volumes; a long exposed concrete box that extends into a reflecting pool, and a taller perpendicular rendered structure.

The building’s simple forms and finishes are typical of Kedem‘s numerous projects in the Tel Aviv region, which include a property featuring bands of shutters with a similar geometric pattern and a home surrounded by screens that reference traditional latticework.

For AB House, the studio applied painted metal screens – that it describes as evocative of netting – to various external and internal surfaces.

“The netting meanders across the house almost as if it were marking out a series of contours,” said the architects. “At times, it is ethereal allowing light and air to access the spaces.”

“Sometimes it is closed, acting as an entrance whilst at other times it is inlaid with a system of pivoting doors that allow one of the facades to appear dynamic and ever changing,” they added.

At the entrance, the screens provide a partial view of the house stretching away towards the rear of the plot, and continue across a rendered wall containing the front door.

The pivoting sections are integrated into a surface separating the master bedroom from a poolside terrace. Rotating the screens enhances the connection between these interior and exterior spaces.

Inside the home, the perforated pattern is repeated in elements including a black-painted balustrade that separates the kitchen from a staircase with cantilevered treads.

The partly opaque surfaces cast patterns of light and shadow on internal walls and floors that alter throughout the day.

The play of light is reversed at night, when the house’s interior illumination is filtered through the apertures in the screens.

A concrete wall that extends along the southern side of the building reaches down but never touches the ground as it flanks the pool and living space.

The illusion of floating lightens the visual mass of the 11-metre concrete roof, which also rests lightly on the glass walls enclosing the lounge.

This space connects with the pool terrace on one side, and on the other overlooks the reflecting pool and a sunken courtyard garden.

Photography is by Amit Geron.