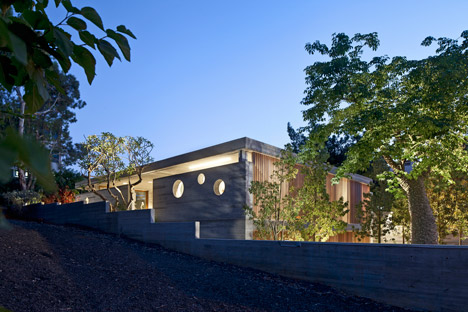 Concrete forms influenced by 1950s architecture were combined with contemporary details for this house that architect Pitsou Kedem designed for himself and his family in Ramat HaSharon, near Tel Aviv (+ slideshow).

Pitsou Kedem‘s home is located in a neighbourhood developed in the 1950s to accommodate army veterans. The low profiles and Modernist styling of the buildings that remain from this era informed the forms and materials employed by the architect.

“I designed the house with the horizontal lines and clear tight grid that characterises the humble, timeless style of this period,” Kedem told Dezeen.

“I also chose to use the same materials, aiming not for a fashionable home, but one I hope will be relevant for many years.”

The building comprises two square floors stacked on top of one another, with the lower level partially submerged in the sloping site.

Exposed concrete walls form the main structural elements and create a sense of solidity. This is mediated by a roof that appears from certain angles to float, due to the band of glazing between it and the tops of the walls.

“I wanted to make my family’s home cosy yet architectural,” Kedem claimed. “My decision was to create not high spaces but rooms with a human scale.”

The concrete roof is supported by internal walls flanking the staircase at the centre of the house, as well as by columns along the glazed facade that fronts the garden. It also cantilevers out slightly to shelter a terrace.

For the double-height elevation on one side, the solid concrete gives way to glazing that extends along both storeys.

Timber louvres shield the glazing and regulate how much sunlight reaches the interior, as well as ensuring privacy when required.

The louvres are electronically controlled and divided into groups so they can be adjusted in accordance with the needs of the different internal spaces, which results in patterns of light and shadow across the length of the facade.

An entrance at the centre of the house on the upper level leads into an open kitchen, living and dining area with a frameless window at the far end.

The central staircase divides the living areas on one side of the plan from the master bedroom suite and study on the other.

The staircase was constructed from textured metal and is enclosed by walls of exposed silicate bricks. Natural light filtering through timber slats is distributed to the adjoining areas through round holes in the walls.

Throughout the building, the architect selected materials that would age well over time. “”The use of raw materials in their original state – exposed concrete, wood and unpainted iron – conveyed and magnified both the material and sensational experience of home,” said Kedem.

“Designing my own home was an important experience for me as an architect,” he added. “Beyond the pleasure of building a house for my family, I learned a lot about the client’s experience. It was also an important opportunity to discuss the practical aspects of architecture and not only the design.”

Photography is by Amit Geron, with styling by Eti Buskila.

The post Pitsou Kedem’s house in Israel is influenced by
its “humble and timeless” Modernist neighbours appeared first on Dezeen.