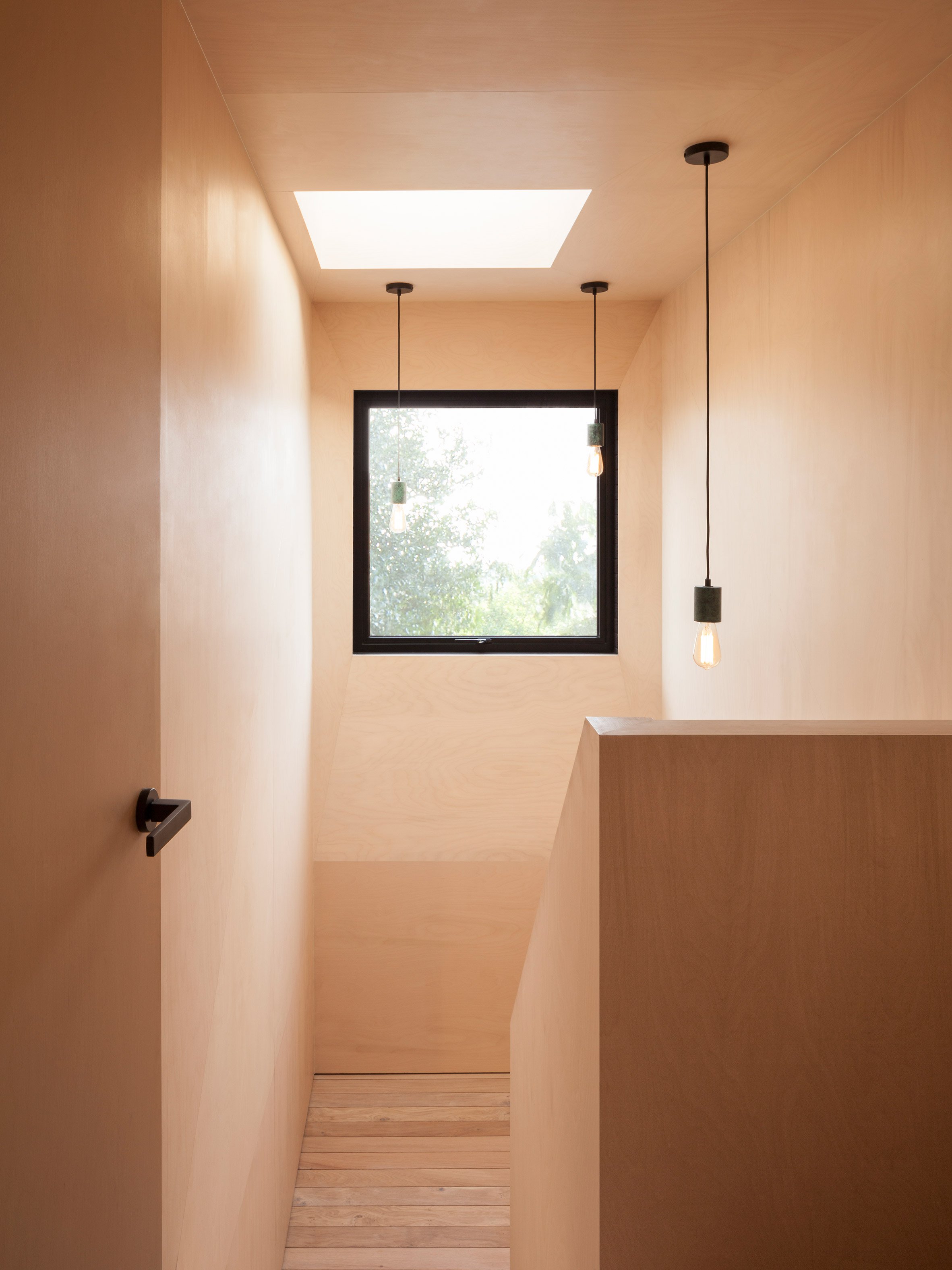 Behind a charred larch exterior, this London loft extension contains a pair of plywood-lined bedrooms that double up as quiet study spaces.

British studio Widger Architecture designed the extension for a first-floor flat in Walthamstow, east London. The brief was to transform the old attic floor into new living spaces, including two generously sized bedrooms.

The sloping roof presented an issue with head-height, which Widger Architecture got around by building a dormer window that spans the entire width of the property. This new addition creates a flat ceiling for the two bedrooms.

The spaces were then lined almost entirely with plywood – a material that is getting a lot of attention at the moment, thanks to a new exhibition at the V&A.

Birch plywood covers the walls and ceilings, but was also used to create built-in furniture including cupboards, desks and a window seat. Simple but decorative details were also created in the joinery, from facets around the windows, to striped frames around windows and doorways.

“These spaces were previously difficult to inhabit and utilise, due to awkward wall and ceiling planes,” said the studio, which is led by architect Kevin Widger.

“The design approach took the existing forms, folds and edges, and not only improved, but also embraced them, attaching new complementary angular forms alongside,” it continued.

“The plywood surfaces throughout the interior add a sense of weightlessness floating above the floor. The use of birch plywood is not only limited to finishes, the end grain is exposed on the staircase banister, architraves, door and window frames.”

The plywood is complemented by wooden floors and dark fixtures, including wall-mounted lights, switches and window frames.

Externally, the extension is entirely clad in blackened larch, which creates horizontal stripes across the exterior walls. It is only interrupted by a trio of square windows, which are all different sizes.

The burnt wood folds in to meet the windows, so it is slightly visible from inside. The aim was for residents to be able to appreciate the texture and colour of the charred material, rather than just to see it from afar.

“The process of burning not only protects the timber cladding but also gives a refinement to the exterior that stands in contrast to the surrounding residential terrace,” added the studio.

Widger Architecture is based between London and Dorset. Called 61AMR, the Walthamstow loft is one of the studio’s first projects.

Photography is by Ståle Eriksen.