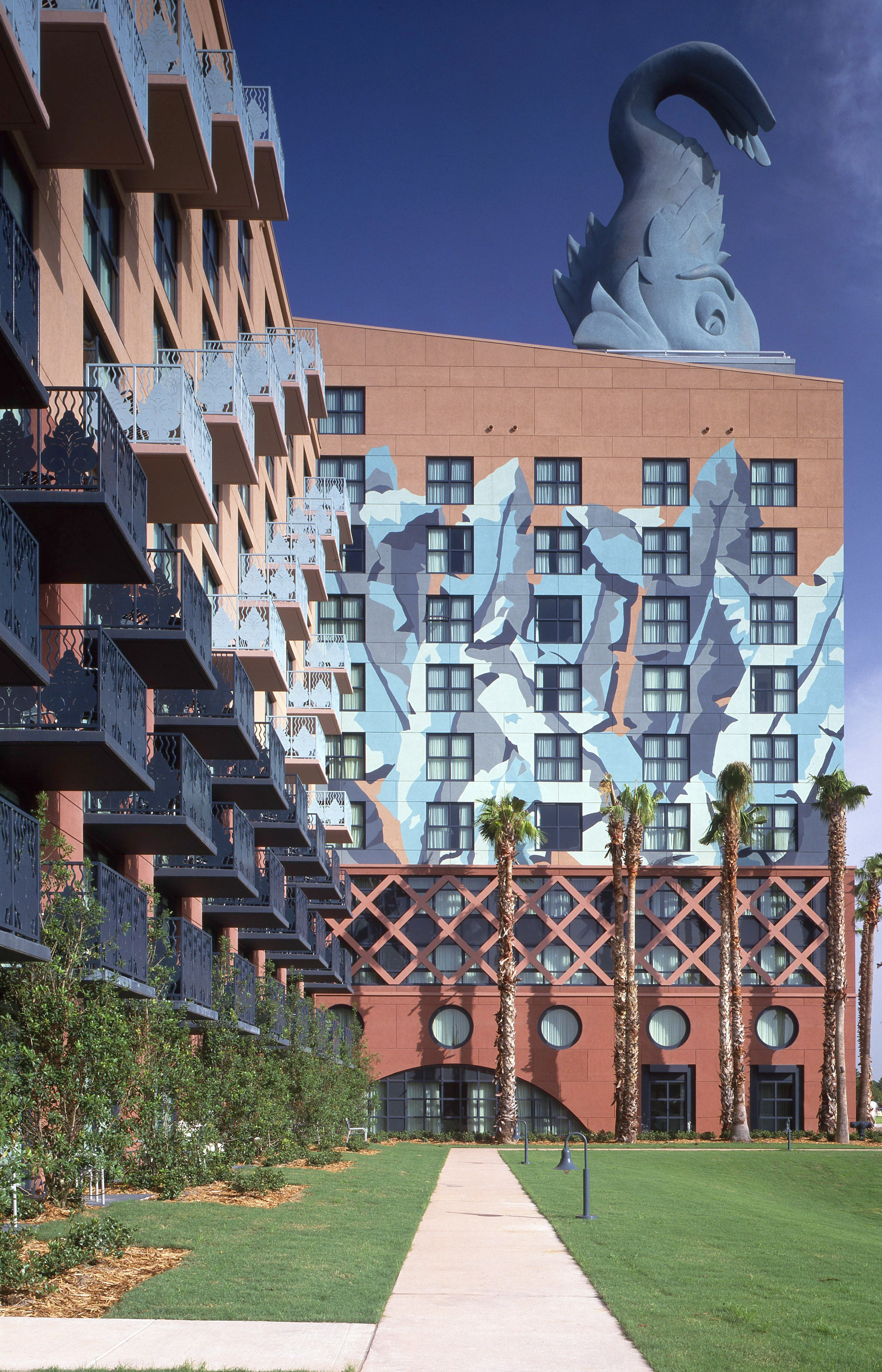 With the AIA 2017 conference currently taking place in Orlando, we’ve reprised our series on postmodern architecture and design for a one-off special, spotlighting an iconic pair of buildings in the Florida city: Michael Graves‘ colourful hotels for Disney World.

New York and New Jersey-based Michael Graves Architecture & Design created the Dolphin and Swan hotels at the Walt Disney World resort, to the southwest of Downtown Orlando, during the late 1980s.

Their brightly hued exteriors, boldly geometric volumes and animal-shaped pediments set them far apart from much of Orlando’s mundane resort architecture – with the exception of the elaborate theme parks and attractions.

The pair of vast hotel buildings, totalling two million square feet, sit opposite each other on either side of a lake, but are connected by a causeway across the waterside.

Together they include over 2,200 guest rooms, and huge conference and event facilities, including 16 food and beverage outlets.

Disney’s hotel operators had originally wanted all of their hospitality venues to follow strict brand guidelines, in order to create a “uniform experience” across its global resorts. But Graves’ firm had other ideas.

The studio had already become well-known for the nods to historical styles it incorporated its projects, like the mish-mash of styles that can be picked out from its Denver Public Library.

This attitude formed the foundation of the architectural movement dubbed postmodernism, for its apparent reaction to the lack of ornament and historic references found in modernist and international-style buildings. Dezeen highlighted some of the most important examples of postmodern architecture and design during our Pomo summer, which included buildings by Robert Venturi and Terry Farrell, and furniture by Ettore Sottsass and Alessandro Mendini.

For the Disney project, Graves and his team looked to past art and architecture, as well as the local landscape and climate, in order to design buildings that would be unique to the Orlando location.

“Rather than a literal replication of a historic building type or style, as evident in some of Disney’s architecture, we looked more broadly to the history of art and architecture for themes, trying to create an exuberance that complemented Disney’s properties and their location in Florida,” project architect Patrick Burke told Dezeen.

“The Walt Disney Company coined the phrase ‘entertainment architecture’ to describe what we had created.”

The larger Dolphin hotel is anchored by a giant triangular element at its centre, intersected by a linear volume with a slightly curved top. Four wings protrude away from the main building towards the water, while the sprawling convention centre stretches off at an angle behind.

The smaller Swan repeats its sister venue’s gently arching backbone but has only two wings.

Also as a result, the facades of the two hotels are decorated with large-scale patterns. Banana leaves cover the Dolphin, while abstract waves can be found across the smaller Swan, borrowing from Florida’s wet tropical landscape.

Roofs are topped with ornamental animals that correspond to the building’s names, making them easily distinguishable to guests from afar.

Graves’ firm was responsible for the entire site, including the architecture, interiors, furniture, signage and artwork.

The exteriors remain intact, however several rounds of alterations have taken place on the insides.

Burke, who has worked at Graves’ office since 1982, believes that the hotels paved the way for the use of design to create atmospheres that guests wouldn’t find anywhere else.

“Today, we have come to expect unique design experiences in hotels and restaurants,” said Burke. “These can either be specific to the local context or create a design statement and a new set of experiences.”

“The Walt Disney World Dolphin and Swan Hotels were early, groundbreaking ventures into considering design as an important part of the hospitality experience,” he added.

Michael Graves Architecture & Design went on to design the Team Disney Building in Burbank, California, which also has a colourful, playful aesthetic that one would easily associate with the animation company.

A postmodern interpretation of the Parthenon in Athens, the building’s facades feature giant sculptures of the seven cartoon dwarves from the company’s 1937 adaptation of Snow White.

When Graves died aged 80 in 2015, the causeway connecting the Dolphin and Swan hotels across the lake was renamed the Michael Graves Causeway.

The architect’s postmodern legacy also includes iconic architecture like the Portland Building, to whimsical homeware like the celebrated 9093 kettle for Alessi.

However, the Dolphin and Swans hotels still stand out for Burke as some of his favourite projects.

“Thirty years later, this project remains an important and memorable experience for visitors and Disney fans alike – and one of the most memorable projects of my career,” Burke said.