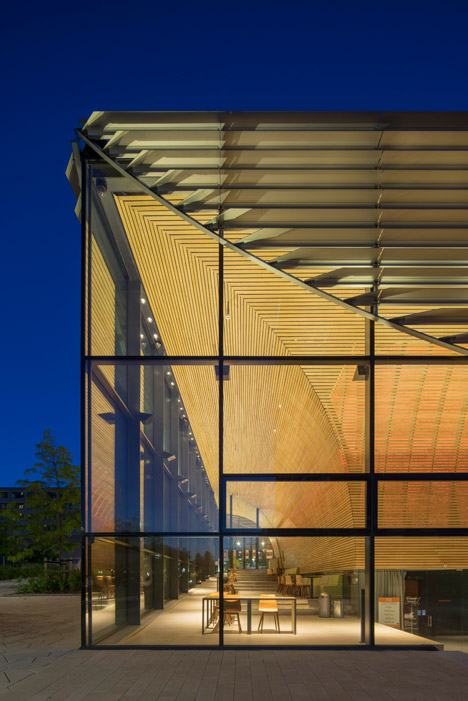 Powerhouse Company has completed a new student centre for Erasmus University in Rotterdam, which features a transparent exterior and a curving oak interior (+ movie).
Photograph by Ronald Tilleman
Described by the Dutch studio as having an “egg-in-a-box arrangement”, the 1,800-square-metre student pavilion is intended to become the new social heart of the university campus, located to the east of the city centre.

One of the main aims of the project was to create a bright and welcoming space for staff and students, so Powerhouse Company designed the building to be as open as possible – with the most public activities concentrated around the perimeter.
Photograph by Ronald Tilleman
This idea resulted in a building with two layers. Cafe and study areas sit directly behind the transparent facade, while storage areas and service spaces are located behind a curving wall of timber, which also encloses a 200-seat events space.
Photograph by Ronald Tilleman
The foyer is positioned on the south facade, where it fronts a public plaza. A study area sits beside the north-east wall to limit glare on computer screens, while the cafe runs along the western edge to benefit from evening sun.
Photograph by Rene de Wit
“This ‘egg in a box’ arrangement preserves the transparency of the exterior through its floor-to-ceiling glazing,” said the architects, who won a competition to design the building in 2010.
“It allows the pavilion to better connect with its surroundings as well as to encourage passersby to flow in from all elevations.”
Photograph by Rene de Wit
The building is just two storeys high, which the architects hope will offer “a welcome break among the tall Brutalist buildings of the university’s suburban campus”.
Photograph by Rene de Wit
The stepped landscape of the site allowed both levels to meet the ground, and the curving steps of an adjacent pathway continue inside the building, forming the main internal staircase.
Photograph by Ronald Tilleman
The curving red-oak wall creates a semi-barrel-vaulted ceiling above the various social spaces. The kitchen, toilets and technical spaces are hidden away behind it, organised around a central corridor.
Photo by Christian van der Kooy
“This lath structure makes an eye-catching feature and softens the materiality of the internal spaces,” added Powerhouse Company, whose current projects include a triangular railway station and a 100-metre-tall broadcast and observation tower.
Photo by Christian van der Kooy
The multi-purpose events space occupies the entire first floor, and can be used as a lecture theatre, an auditorium or as a film screening room.
Photo by Christian van der Kooy
Mechanical louvres form a large semi-circle on the four facades and can be adjusted to act as a sunscreen, relative to the sun’s position in the sky.
Photograph by Christian van der Kooy
Large hatches in the roof open automatically to allow air to circulate, while a ground-sourced heat pump keeps the building warm in winter.
Photograph is by Rene de Wit
The Erasmus University student pavilion forms part of a wider masterplan for the campus by Danish landscape firm Juurlink + Geluk and Studio Sputnik. Other new additions will include a canteen, and underground car park and new landscaping.