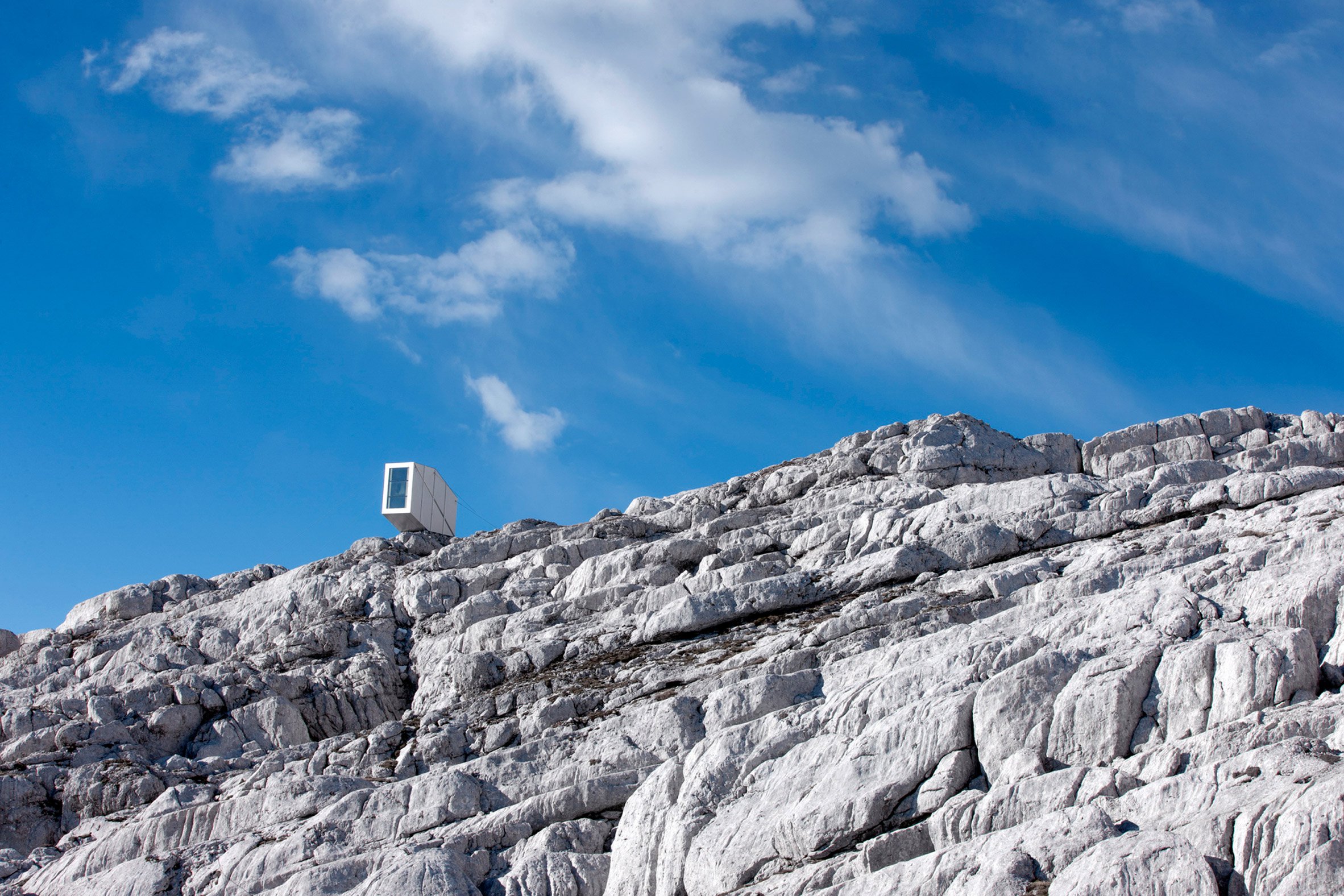 This tiny aluminium-clad cabin by Slovenian studio OFIS Arhitekti cantilevers over the edge of a mountain on the Slovenian-Italian border.

OFIS Arhitekti worked with local structural engineers CBD to develop the Kanin Winter Cabin, which is designed to resist extreme weather conditions on its exposed site on Mount Kanin.

The Slovenian studio – which is featured on the Dezeen Hot List as one of the top 400 forces in global architecture and design – previously created a similar cabin on Slovenia’s Skuta Mountain.

This tiny 9.7-square-metre cabin has a narrow floor plan containing three shelf-like floors, and has dimensions of just 2.4 by 4.9 metres.

It is made from a combination of cross-laminated timber, glass and aluminium panels.

“The challenge is to install real objects, shelters in 1:1 on remote sites and study their response to extreme weather, radical temperature shifts, snow and rugged terrain,” said the studio.

“The harsh conditions of wind, snow, landslides, terrain, and weather require a response of specific architectural forms, structures and concept.”

The mountain is known for its inclement weather conditions, with record snowfalls and rains, as well as strong winds.

The site can be accessed only by climbers or by helicopter, so the studio called on the services of the Slovenian army to airlift the cabin into its precarious position.

With turbulent weather conditions, it took three attempts for the Slovene Armed Forces helicopter crew to deliver the cabin onto its rocky foundations. Here, the cabin cantlievers over the edge of the mountain and is tethered in place by cables.

Inside, the timber-lined cabin features three resting platforms that face towards the valley through a large panoramic window. Its only decoration is a hunting trophy of a pair of deer antlers.

“This particular site was chosen because of its 360-degree views over Slovenia and Italy, and spectacular views to Triglav, Soca Valley and Adriatic sea,” said the studio. “It will become a destination for hikers, climbers, cavers, mountaineers, nature lovers and romantics.”

“The interior design dictates modesty, subordinate to the function, providing accommodation for up to nine mountaineers,” it continued.

The project, which was commissioned by the nearby town of Bovec and the Slovenian Mountaineer Association, is also intended as a weather test for the materials used.

Photography is by Janez Martincic.