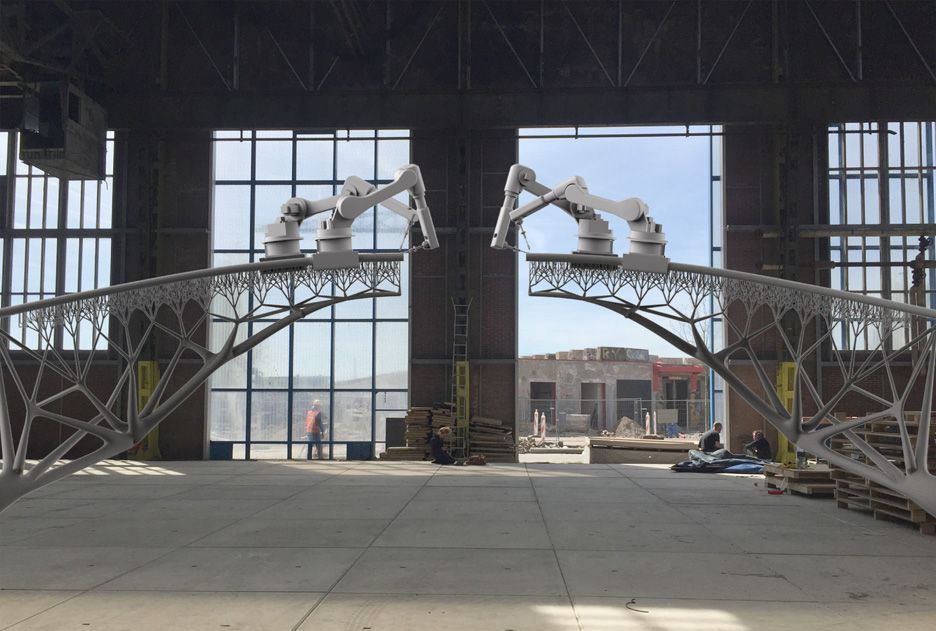 Future Makers: the technology that startup MX3D is developing to 3D print a bridge in Amsterdam could be used to produce “endless” different structures, says Dutch designer Joris Laarman in this exclusive movie.

MX3D is a new research and development company co-founded by Laarman and Tim Geurtjens, which plans to use robots to produce the world’s first functional 3D-printed steel bridge over an Amsterdam canal by 2017.

“The basics of the technology is pretty simple,” Laarman explains in the movie, which was filmed at MX3D’s workshop in Amsterdam. “We’re using an industrial robot that is usually used in assembly lines in the car industry. We have combined this with a welding machine and our own software to have it 3D print in metal.”

The six-axis robots that MX3D are adapting are able to rotate their arms along six different planes of movement. They build up structures by depositing small quantities of steel in layers.

Unlike traditional 3D printers, robots can produce much larger structures by moving across them as they print.

“You’re not limited by size, so we can theoretically print endlessly big,” Laarman says.

The steel footbridge will span eight metres. MX3D originally intended to print the bridge in situ, but had to abandon that plan over health and safety concerns. Laarman and his team will now reconstruct a section of the canal in their workshop to demonstrate that it could be done on site.

The bridge will be printed in one piece, with the robots printing a load-bearing structure to support their own weight as they work.

“The bridge is going to be fairly small – it’s a pedestrian bridge,” Laarman says. “It’s still a huge challenge, because we want to print it in one go. We want the robots to print their own support structure as they move over the water.”

Laarman says that key to the project lies in the development of the software, which will allow the robots to be programmed to create a variety of different structures.

“A robot normally does the same movement over and over again,” he explains. “But with smart software we can make it do much more complicated movements.”

MX3D will be able to use the code they are developing for the bridge to build many other structures, he explains.

“The bridge is very much a learning process for us. We are trying to test all the facets of the technology to develop the software,” Laarman says.

“In the end this will result in a really big library of algorithms and scripts, which in the future we can use for all kinds of geometries. After the bridge is done I’m sure we can move into many more directions.”

Laarman is convinced that robots and 3D-printing techniques will be used more and more by the construction industry.

“Robots will be really important for construction in the future,” he says. “It’s just a much more adaptive way of producing things.”

“We can print millions different types of objects with one machine. This is what we’re able to do right now and it’s just the beginning.”

This movie was filmed by Dezeen in Amsterdam. Images and additional footage used in the movie are courtesy of MX3D.

Future Makers is a collaboration between Dezeen and Autodesk exploring how designers are harnessing new digital tools and advanced manufacturing technology to pioneer the future of making things. You can watch all the movies in the series as we publish them on our YouTube playlist:

The post Producing the world’s first 3D-printed bridge with robots “is just the beginning” appeared first on Dezeen.