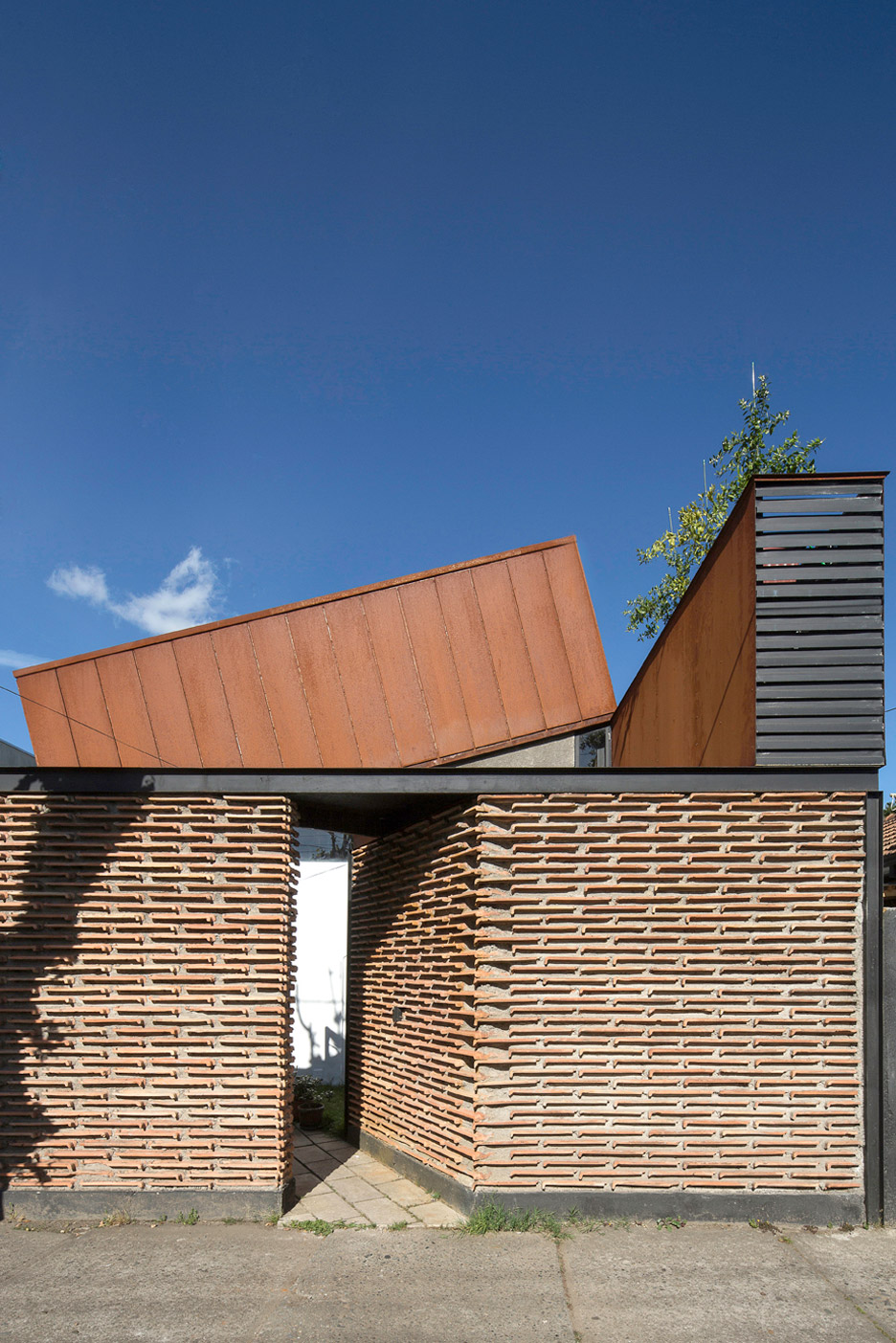 Chilean architect Felipe Alarcón Carreño has added an angled volume to the top of this small house in the city of Linares to raise the ceiling and create a brighter, more spacious interior.

Casa Lautaro stands within a compact neighbourhood, where surrounding homes block out much of the natural light accessible to the one-storey house.

To brighten the interior, Alarcón exchanged the previous gabled roof for a slanted cuboid volume. Its base sits on the northern wall and slopes upward to lean on a rectilinear storage space over the south wall.

Windows form a row on the box’s south-facing side. Triangular glazing fills the gap between the tilted volume and the original walls, brightening the interior from the east and west.

The architect replaced the original flat ceiling with exposed rafters, which form part of the inverted truss that supports the heightened roof.

“Part of our aim was to expand the volume of the home to achieve a continuous space,” Alarcón told Dezeen.

“Retaining the light of the home required a truss. We inverted it to create the appearance of a pure volume on the outside, while emphasising the window looking towards the sky inside the home.”

Two thin rectangular areas make up the home’s first-floor plan. The first section – previously divided into three rooms and a hallway – was replaced with an open living and dining space below the raised roof.

A bedroom, bathroom, kitchen and service rooms take up the second half of the floor area, where the lower ceiling creates more intimate spaces.

An exposed staircase from the living room leads to a loft above the southern section of the home. A bedroom and a lounge are situated at either end for the second floor, divided by a partition.

The two-metre bedroom door can be opened to join the two sections, while exits through the glazing at both sides lead out onto pebbled terraces.

The architects reused the tiles and wood from the original roof as a way to keep the budget down and preserve the memory of the old structure.

“We took the old wooden beams and made them into doors, and steps for the staircase,” said the architect. “But the most impact came from the the brick roof tiles: we incorporated all of them into a facade to form a kind of masonry.”

Roof extensions are common at homes restricted by tight plots and close neighbours. Other examples include a brick home in Washington DC and a residence in Montreal.